The latest in my series of mini TV and film reviews, with trailers and 'where to watch'.  If you have trouble finding where any show/film is available in your country, this is a good site: Justwatch.  Just put the name of the show into the search, and choose your country further down, from the drop-down menu.  It shows where you can stream, buy or rent.

However... I've found it to be not absolutely up to date at all times.  Sometimes I've had better results simply putting 'where can I watch ***' into the search engine, or going to the programme's own site, if it has one.

Six episodes about the formation, rise to anti-stardom and inevitable demise of the Sex Pistols.  It's shown from the POV of guitarist Steve Jones, as it's based on his book Lonely Boy.

Jones is played by Toby Wallace (you know how the one producing always gets someone really good-looking to play themselves!), but the star of the show, in my opinion, was Anson Boon as John Lydon (Johnny Rotten), who had Lydon's voice down pat, and portrayed his eccentricity and brilliance so well.

I get that Steve Jones's past was ramped up a bit for dramatic effect, but many of the incidents really did take place - Sid Vicious assaulting Bob Harris, Jones stealing Bowie's gear, and the story that became the song 'Bodies'.

Maisie Williams (Arya in Game of Thrones) was surprisingly convincing as Jordan, and Beth Dillon looked exactly like the young Siouxie Sioux.  I wasn't part of the punk scene although I was the right age, because I was one of the long hair rock music people they despised (😆), but I remember it well, and it's pretty accurate.  The seventies was a great time to be young, and this series shows it.  I liked the stuff about Chrissie Hynde, too, who I never knew was so involved with the Pistols, though I was not sure about the casting.

Highly recommended, whether you were into the music or not, but especially if you remember the time.  I was totally gripped all the way through.

....and here are some of the actors with their real-life counterparts :) 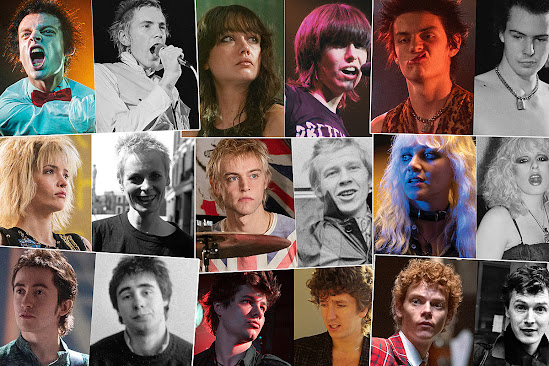 Miniseries: We Own This City

Jon Bernthal and Jamie Hector in a new cop show from the makers of The Wire and The Deuce?  Sign me up!

Based on a true story and a non-fiction book by investigative journalist Justin Fenton, the miniseries is six episodes long and covers the rise and fall of the  Baltimore PD's Gun Trace Task Force, headed by Wayne Jenkins. Bernthal plays Jenkins as a kind of Shane Walsh on speed (info for non-believers: Shane was the cop he played in The Walking Dead).  His crew are heavily into helping themselves to any wads of cash available, arresting innocent people who have committed no crime to keep their stats up, etc.  Jamie Hector plays the good-guy homicide detective who is not without blame.

The time line goes back and forth as we see how Jenkins' criminal career evolved - at times it's a little confusing and you do have to keep on the ball in order to remember whether you're in 2015 or 2017 or whenever.  It's very good and I did enjoy it, though I was slightly put off by the way it seemed to have an agenda, as well as telling the story.  Brilliantly written, directed and acted.

J K Simmons (Oz, The Tomorrow War, Counterpart, Justice League) and Sissy Spacek are terrific as an old couple who have a secret down their cellar - a chamber that leads to another planet, that can also transport people to other places on Earth, in an instant.

The beginning is slow, with nothing much happening in the first episode, but that's okay; Simmons and Spacek's quality of acting kept me interested.  Episode 2 ups the pace, and in #3, the story really gets going.  It's good.  I liked it.  Room for a Season 2!

I was going to say that Ricky Gervais is a love-him-or-hate-him sort of artist, but I find myself right of centre where he's concerned: mostly, I think he's hilarious and spot on, but now and again he tries too hard to shock.  His use of the 'c' word, both in this and Afterlife, is a little cringe-making (not because it's offensive, but because it's trying to be so), and now and again in this stand-up show he goes too far with the 'I can't believe he said that' stuff.  For instance, the bit about how funny it would be to fart at a baby's funeral just came off as not very funny at all, and bad taste.  Mostly, though, this show is great.  He's a master of cutting through daft pretensions, through bullshit and cultural fads, of brilliantly observing the body language, facial expressions and speech affectations of those he wants to take the piss out of, not excluding himself.  If you love his sort of humour, you'll definitely enjoy this.  And I loved the bit about the duck-billed platypus making his own custard.

Elisabeth Moss is a former reporter who was attacked and left for dead by a psycho played most convincingly by Jamie Bell (Billy Elliot).  Murder victims with similar injuries to hers start popping up, and she enlists the help of maverick reporter Dan Velazquez (you know, the one who drinks too much and gets into trouble with his bosses but is like a dog with a bone for the right story), played by Wagner Moura - Pablo Escobar in Narcos.

After a while, they realise that the timelines are all wrong, between the cases and the evidence, which is when the story moves from a dark psych thriller to science fiction.  It's good, I enjoyed it.  Wouldn't totally rave about it, but I liked it.

Four part documentary about Sarma Melngailis, who owned the restaurant Pure Food and Wine, a vegan raw food establishment in New York that was, at the time, the place for the health-conscious celebrity to be seen.

For some reason, which I was not able to fathom (bearing in mind that Ms Melngailis was beautiful, successful, wealthy, sought after, etc etc), she becomes involved with a fat uncouth conman called Anthony Strangis, who manages to convince her that he's part of a supernatural group of overlords who secretly run the universe, and that if she paid him large amounts of money he would make her beloved dog immortal, and they would (eventually) be granted a happy ever after.  Yes, it really is that nuts.

She gave him everything in her bank accounts including thousands from investors, failing to pay her staff.  Her mother's retirement fund disappeared too - all because Strangis told her she was being 'tested' by this group of deities who wouldn't make her dog immortal if she didn't.

There are long interviews with Sarma; at first I thought she was a just victim of mind control/brainwashing, but as it went on she came over as something of a narcissist, not caring how many people suffered because of what she did.  She kept saying, 'He made me send him (insert vast amount of cash here)', but every time it was a choice she made, as was lying to investors to get more money, pretending she needed it for the business.

Spoiler Alert: he gambled it all way.  Something like ＄1.6 million.

Nine young women (all about 17 years old) end up on a deserted island after a plane crash en route to a retreat that they're told will help them through their emotional problems.  Except that the 'plane crash' and desert island survival is part of their 'programme', and they're being monitored at all times.  Amongst the group are two 'plants' who are in on what's happening.  In each episode we see backstory, bringing the whole plot together and showing how they all ended up there.  In Season 2, we see the boys' group, same scenario.  Of course, as time goes on, one or two of the group members begin to suss out that there's something fishy going on.

If you've seen it, my favourite female characters were Dot and Fatin.  I liked Shelby, and Toni and Nora grew on me as time went on.  Leah and Martha I found intensely irritating.  It's very well-plotted and acted, the unfolding of the plot is paced just right, and I found it more absorbing than I thought I would.

The negative: I noticed that each of the girls were allotted one basic character trait (being quick to anger, obsessed with appearance, always seeing the good in people, etc) that was then displayed and referred to at regular intervals, just to make sure we knew what their 'issue' was.  Also, despite them being desperately hungry much of the time, none of them lose any weight.  The two who are overweight remain so; the largest of them actually looks fatter in Season 2.  When you're that age the weight just falls off you, especially if you have no access to processed carbs and sugar.

Now, the boys.  If we are to believe what we see, all late teenage boys are super-touchy-feely, talk to each other about their feelings, give each other frequent, reassuring hugs, and communicate in woke ideology.  The only one I liked was Kirin, and I quite liked the entrepreneurial Scotty; the rest (aside from Seth, who was just weird) seemed like a good advert for bringing back National Service (if you're younger than 55 and not British you probably won't know what this means, but never mind).

Having said all this!!!  I did enjoy it, and it ends on a terrific cliffhanger that made me anxious to see Season 3!

Seven episodes, cops vs drug dealers.  Chiwetel Ejiofor (you'll recognise him from lots of British TV, if you don't know the name) stars as DI Jonah Gabriel, complete with memory loss from an accident, and Christopher Eccleston as the numbers guy for drug lords who juggles multi-million pound deals and the care of his wife, who has Alzheimer's.  Rafe Spall is excellent as the spoilt, psychopathic son of the former cartel boss, as is Stephen Rea, as the mysterious Mr Gatehouse (no spoilers!).

As the series goes on, Gabriel begins to uncover vast corruption inside the force, and can't remember if he had anything to do with it before his accident, or not.  It's all about morality - how far will you go down the wrong path, to get what you want?

It's good - it lacked the spark that would have made it truly memorable, but I enjoyed it.

Based on the novel of the same name by Philipp Meyer, set in small-town Pennsylvania.  Jeff Daniels stars as chief of police Del Harris, who takes on a case when the son of Grace, the woman he loves, is accused of murder.  Grace is played by Maura Tierney - Helen in The Affair.  Harris uncovers the network of Fentanyl distribution in the town.   Also stars Dallas Roberts (Milton Mamet in TWD) as a dodgy pharmacist.

The atmosphere of the 'rust belt' (dilapidated steel towns) adds so much to the story - most people are poor, down-at-heel, scraping together a living any way they can.  It's good.  Not outstanding, but good.