A Meeting of the Pens

(FYI: I've linked all names to their Twitter profiles, in case anyone wants to have a look/follow them :)

Last Friday, December 2nd, I had a delightful day and evening out ~ I went with book bloggers Rosie Amber and Cathy Ryan, my sister Proofreader Julia* and fellow writer Shelley Wilson to the Belmont Hotel in Leicester, to meet up with Lizzie Lamb and her group of romance writers; it's a regular get-together for them, so a big thank you to Lizzie and all her friends for inviting us and making us so welcome!  Our chums Georgia Rose and Mark Barry also joined us later in the afternoon; Mark is up the road in Notts so just had to jump onto a train, whereas Georgia had to escape from darkest Cambridgeshire (or is it Bedfordshire?) while her dogs weren't looking.

(*nb, Proofreader Julia is not her birth name.  The first bit came later).


Julia and me in our hotel room 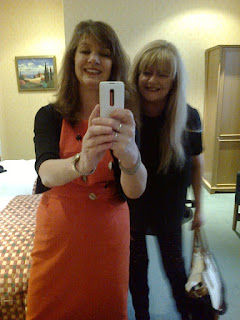 **Warning ~ this is a long post, as I've included loads of photos!**

The romance writers were in full swing when we arrived, so we hung around until they'd done their bit, then sat down over Prosecco and Roses chocolates to talk about... well, books and writing and blogging, and all the stuff you can't bore your non-writing friends about! 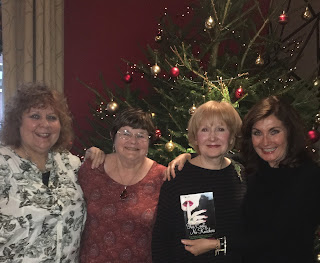 Really like this picture ~ I've met Cathy before,
but not Mags Cullingford, a charming lady! 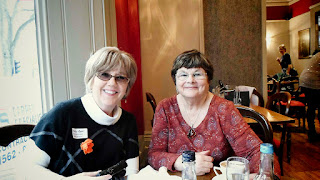 We were checking in at reception when Madalyn Morgan walked out, and I said, "Oh, look ~ it's @ActScribblerDJ, Foxden Acres lady..."  yes, I tend to remember people by their Twitter handle and their book titles.  I do like this picture, even though it's blurred. 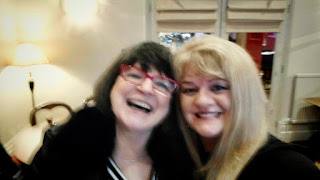 Here's Julia with the uber glamorous Adrienne Vaughan -
incidentally, she and June Kearns win the 'chic' award for the day.
June's hair is cut in this gorgeous 1960s bob and she wore an outfit I coveted, badly (the stripy jumper and tube skirt from the Mama b collection, HERE), and Adrienne looked stunning in a bright red tartan skirt and jacket, the sort of thing you can only carry off if you ... well, if you look like Adrienne, I guess! 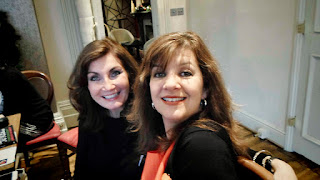 And me with Adrienne... 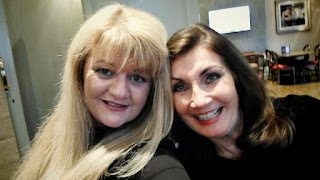 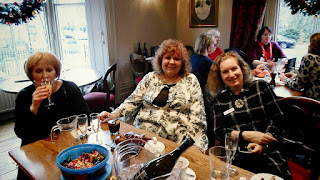 Shelley told me that we had to hold the camera high above our heads to prevent double chins and facial sag.
Seems to have worked for her, anyway..... 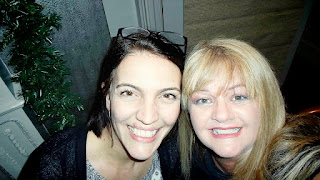 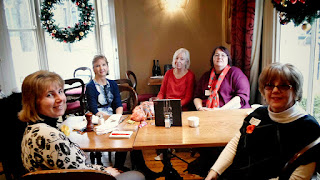 Tip for people who really feel the cold ~ stay at the Belmont!  It was roasting in there.  Julia and I (we feel the hot, not the cold!) asked for the heating to be turned down, but apparently they only had two settings: off, or full blast.  We resorted to opening windows and sneakily turning off radiators.  I rejected some of the photos I was going to put on here because of people's sweaty faces, and mine was the sweatiest; on some I actually had bits of wet fringe sticking to my forehead, and my hair with heat-frizz (not quite as bad as Courtney Cox in that episode of Friends, but not far off!).  When Julia and I got our room at turning-in time, we had to peel off some of our clothes as if we'd been running a marathon in them.  Belmont ~ love the rooms, charming staff, and it saves you money on saunas.

It's so great to meet those you've 'known' online for years, and the weird thing is that it feels as though it's not the first time you've met them... when Georgia Rose walked into the room, I almost carried on a conversation I'd been having with her by email.  I was so glad that I invited Mark in a moment of last minute inspiration, too; brave of him to be the only fox in the hen house, and wonderful to meet him and Georgia for the first time!  Mark and Georgia have worked together on the Brilliant Books project, an initiative that encourages school children to stand away from the video games and read a book ;). 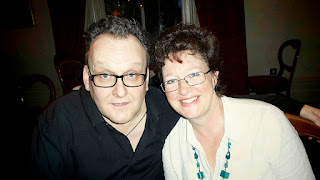 I also met the very sweet Judy Bryan (a Virgo, her Twitter profile says ~ I keep wondering if I ought to re-establish my Zodiac Files series!), and publisher and business book coach Sarah Houldcroft, who was one of those people I felt as though I had known since the playground the moment we were introduced.  Also memorable because she wore a purple dress with her hair dyed exactly the same shade.  I thought I'd taken a photo of her with Julia, but, alas, I have a canny knack of accidentally deleting pictures....

After Lizzie and her ladies had departed, Group B retired to the lounge for several drinks, a light dinner and much laughter.  As with all good evenings, it lasted longer and more drinks were bought than had originally been intended (Mark never did get that 9.30 train).  I was fiddling around with my camera's settings and cocked it all up (as is my wont), but I have added some of the blurred ones because I really liked them anyway! 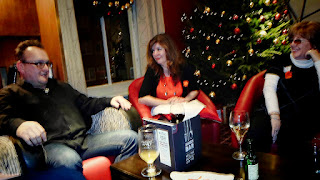 Had a really good night's sleep; sharing a room with my sister brought back memories of our childhood!  No Daddy coming in to tell us to be quiet and go to sleep, though.  The five of us who were staying the night met up at 9 for a breakfast of champions.... 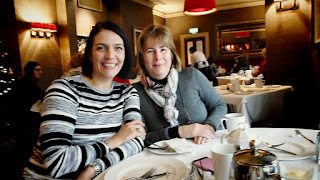 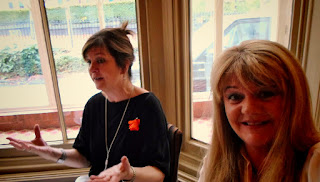 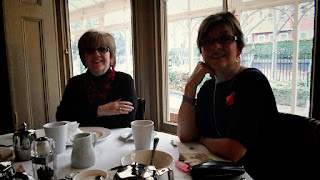 ....and here are a couple of me, Julia, Shelley and Rosie at Leicester station,
before we left to go our separate ways. 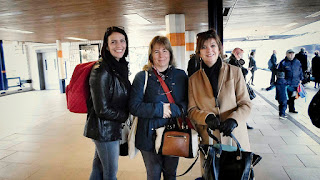 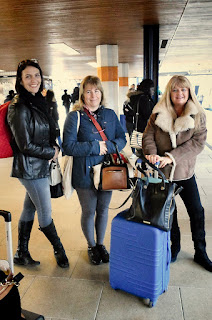 I have to include this one.  Note that even squashed like this,
Shelley still manages to look tall and leggy! 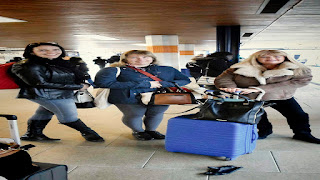 I went off to Northamptonshire to stay overnight with my father.  I just wanted to include this ~ it's a birthday card I gave Dad when I was about seven or eight.  He keeps it on his dresser :) 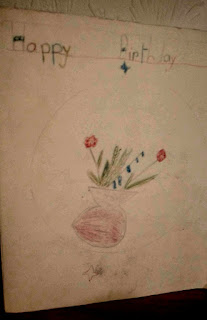 And here's Dad, aged 87, with his smartphone!
I am most impressed ~ and he's recently bought a Kindle, too :) 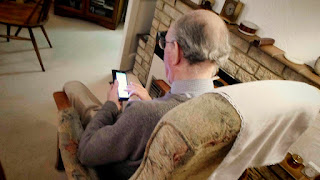 It was a lovely weekend, thanks again so much to Lizzie for organising it and inviting us, and to Rosie for getting our group together.  Until next time! :) 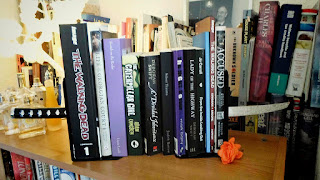