Outstanding, as ever.  Fabulous battle scenes.  Sad that Ivar died, and Harald, but most of all I'm glad that Ubbe and Torvi had a good ending, and that we saw Floki again. Only one complaint - I wanted to see what happened to the mad man of Greenland!

If you've never seen it you've missed a treat, and I envy you having it all to watch from the start :)

About the emergence of an artificial intelligence that teaches itself how to surpass its creators and control us all. Much to think about in this one, and it's action packed, a convincing plot, etc etc.  Stars John Slattery (Mad Men).  Alas, I've just read that it's been cancelled (why do they do this, but keep utter shite on??!), but it's so worth watching this one season, anyway.

Loved this! Ticked every post-apocalyptic box.  Gerard Butler stars as John Garrity, an engineer living in Atlanta with his wife (Morena Baccarin: Jessica Brody in Homeland, Firefly).  People are excited to watch the near-earth passing of an interstellar comet, but it fragments, and pieces start hitting the earth, with catastrophic results.  Garrity and his family are some of those 'selected' for emergency shelter, but of course this is fraught with problems, too, as fires break out all over the world and society collapses.  Top stuff!

Basic plot: school shooting, Nebraska, which the shooters make sure is live streaming.  Troubled 17-year-old Zoe doesn't want to just escape, she wants to bring 'em all down.  When it started, I thought, oh, this is good.  The suggestion that something bad was going to go down was subtle and sinister, the shooters' arrival was shocking, the action was bold, terrifying, the sense of inescapable menace riveting.

Alas, it then morphed into another 'feisty teen saves the world' film.  From about halfway, it went steadily downhill.  There was no more stark, bold, horrifying action.  The sense of menace simmered down as the cracks in the shooters' plan crumbled away, in the face of 'Zoe the Feisty Teen with Lessons of Her Own to Work Through with Help from the Ghost Of Dead Mom'.  You know the sort of thing.

Could have been terrific, but was just okay, and forgettable.

Former undercover cop Jim Worth (Tim Roth) starts a new life as a police chief in a small Canadian town, along with his family.  During the locals' conflict with North Stream Oil, his shady past catches up with him.  The first season is brilliant - 5 stars all the way, and Tim Roth was fabulous, as always.  Season 2 centres around a religious community with which Worth's daughter gets involved, and cocaine trafficking.  It's good, though not as good as Season 1.  Season 3, however, was a disappointment.  It's set in Liverpool, as Jim and his wife and daughter go back to England to face his deadliest and oldest enemy.  Became clichéd and like a parody of itself, with the three suddenly morphing into Ocean 11 type characters.

I'd say watch the first two, for sure, but skip S3.

Film: Made in Britain (Prime Video)

Needed a bit more Tim Roth after finishing Tin Star, so I watched this again.  Roth in his first role, in 1982, as 16-year-old skinhead Trevor and his conflict with the authorities.  In the same mode as other films of the time, like Scum.  V good indeed.

The life of Elton John - Taron Egerton is v good in the main role, as is Jamie Bell as Bernie Taupin (and who would have thought the lad from Billy Elliot would grow up so hot???!!).  Also stars Richard Madden (Game of Thrones and a whole bunch of other UK stuff over the past couple of years) as John's calculating manager and lover.

Like many biopics about the rich and famous, this does an excellent job of showing the tormented reality behind the image presented by the people who are making the money out of and manipulating the celebrity.  The film is part musical, which I didn't think I'd like, but it's not over the top, and blends with the rest of it very well.  Also, lots of photos at the end so you can compare the film version with the real thing - something I always like!

Elisabeth Moss stars in this biographical drama based on the novel of the same name by Susan Scarf Merrell: a 'largely fictional story' based around part of novelist Shirley Jackson's life.  Michael Stuhlbarg (Arnold Rothstein in Boardwalk Empire) plays her husband, college professor Stanley.  Odessa Young and Logan Lerman play Fred and Rose Nemser, a young couple who stay with them while Fred works under Stanley.

Comparisons with Who's Afraid of Virginia Wolf are inevitable as Shirley behaves appallingly in the company of guests, fights with Stanley, drinks far too much, as misunderstandings and impulsive behaviour deepen existing problems in the claustrophobic domestic set-up.

nb, Jackson's son criticised the portrayal of his parents, and the Nemsers are fictional.

Based on a true story. In 1917, a young shepherd and her two cousins claim to have seen a vision of the Virgin Mary in the village of Fatima, Portugal.  As news of this vision spreads, many religious pilgrims travel there, and witness what became known as the Miracle of the Sun.  The claims are disbelieved by many, though some sceptics change their minds as time goes on.

Very good; almost had me believing!

Still not finished this, have two episodes to go, but it seemed to suddenly pick up in episode 7 (which was, incidentally, directed by Michael Cudlitz) and 8, with some interesting developments re Silas and Huck.  I found myself enjoying it much more; actually wanted to watch it rather than just thinking, I'd better watch this because it's part of the whole story and will tie up with the Rick Grimes films, etc. I suspect it will only get better, now the characters have a bit more meat to them.

A scientist tries to develop AI beyond the scope of human intelligence, his true motive being to bring his wife back from the dead.  Good, worth a watch, but nothing outstanding.

James Nesbitt stars as a London cop who receives the power to control his own luck.  In the first season, the supernatural element fits in fairly well with the fairly standard action-crime-murder plot about those who are trying to wrest this superpower from him; it's fairly low-key.  I would have given Season 1 3.5*, but when we started watching Season 2, we decided it had become too silly, and abandoned it.

Series: The Stand (CBS All Access, Starzplay in UK)

Have watched the 6 episodes currently showing.  I thought it was going to be great, but it's ... not.  Far more attention is paid to the Dark Man (Alexander Skarsgård) and Mother Abigail (Whoopi Goldberg) than in the book, with the characters having dreams and visions every five minutes - and we all know how tedious dream and hallucination sequences are in TV series and films.  In the book, as far as I can remember, the fact that it is about good versus evil is subtle, so you can make up your own mind; for a long time, it's just the story of travels and interpersonal relationships during a pandemic.  In this, though, the God vs Devil side is somewhat rammed down one's throat.

I like how it's structured, going back and forth between timelines so that a picture of each character is built up, and some of the characters - Owen Teague as Harold Lauder, James Marsden as Stu Redman, Jovan Adepo as Larry Underwood spring to mind - are great.  Unlike Goldberg and Skarsgård.

Worth watching (ish), but I actually got a bit bored in the most recent episode.  Like, 'oh good, there are only fifteen more minutes of this tripe' sort of bored.

Documentary about Suzi Quatro.  Lots of interviews with the lady herself and those who know and have worked with her.  Also her sisters, with whom she started out on her musical career, one of whom clearly had 'issues' about Suzi being the successful one. Suzi seemed great, really down to earth, practical and versatile.

I find music world documentaries fascinating, in particular the early days - and it's surprising how many of them seem to follow the same pattern.  The starting out, disappointments and failures, then the slow rise, when everything is going well, which often seems like the happiest part.  Then comes the 'making it', and a few years of life at the top, which very soon goes sour when the record companies/managers become demanding, the band has 'differences', they have to make the decision whether to follow their creative inclinations or 'sell out', and the sex, drugs and rock 'n' roll lifestyle causes everything to come crashing down.  Next comes a dark patch, then a resurgence.

This is a good one; whether you're a fan of hers, or of 70s music, or just like watching these documentaries, generally, it is most interesting.

In line with my Walking Dead obsession, from December 2019, I decided to do a 'happy birthday' tweet for every member of the TWD cast, past and present.  I couldn't find all the birthdays online, but I managed most.

A few of those mentioned not only actually saw the tweet 😲, but were kind enough to thank me, or acknowledge in some way, which, of course, thrilled me to bits!  Here are their responses: 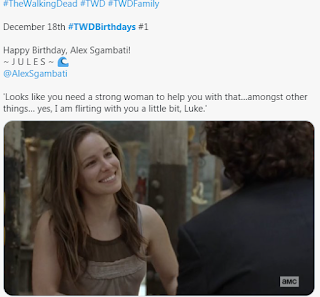 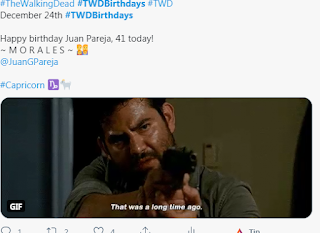 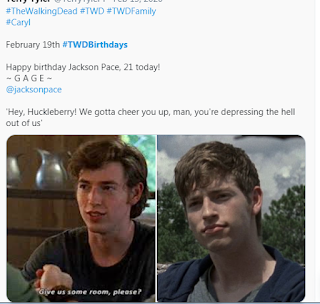 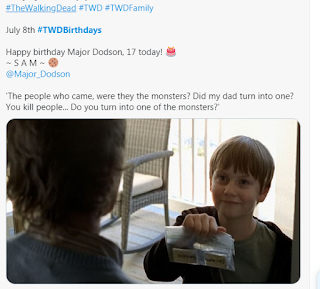 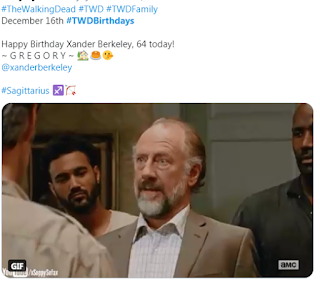 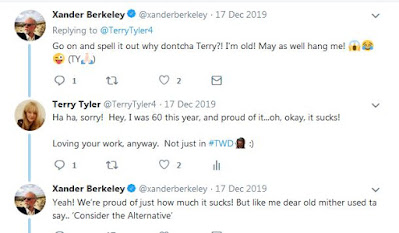 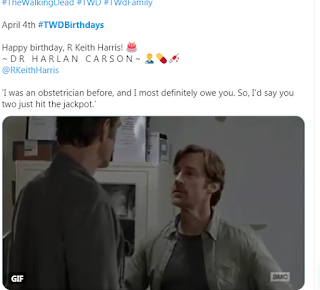 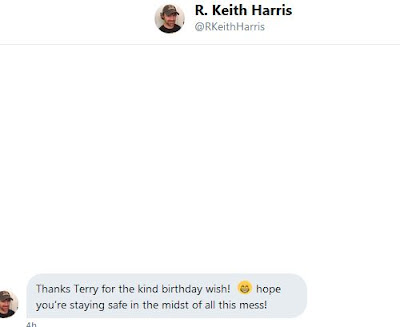 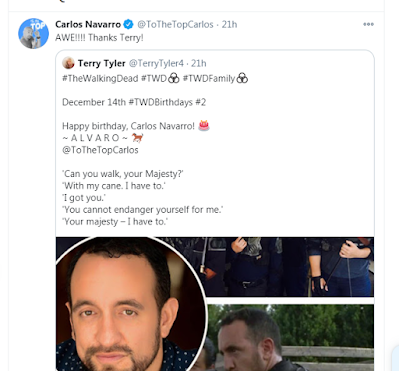 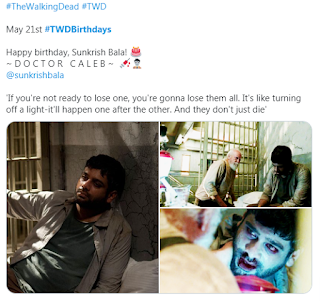 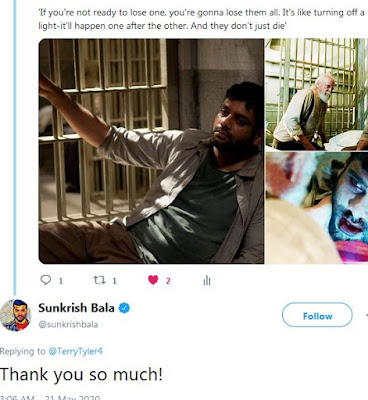 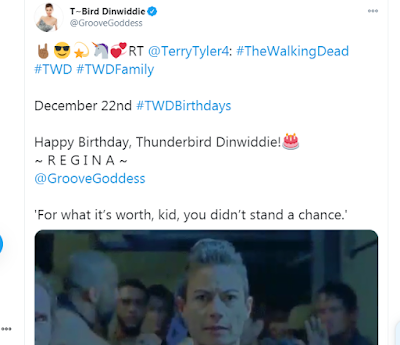 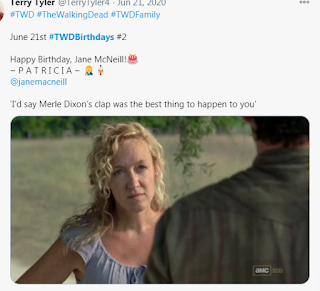 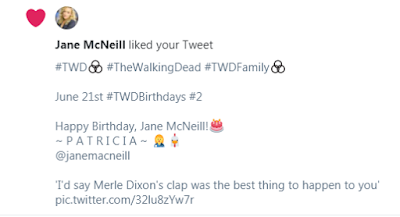 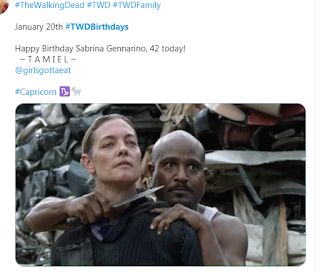 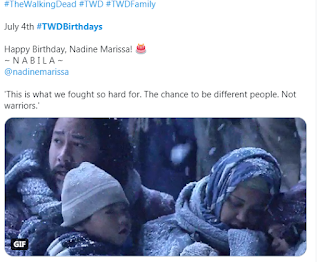 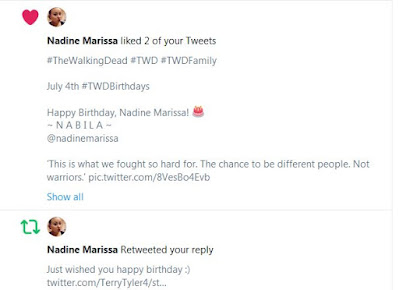 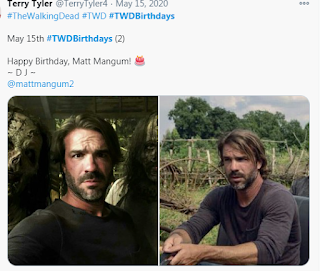 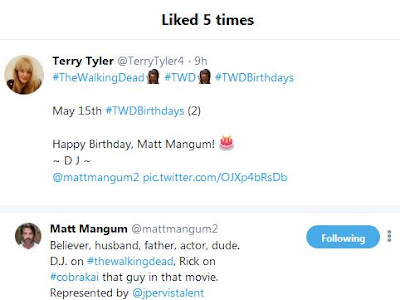 I wasn't as active on this blog as usual in 2020 - only 37 posts all year.  Here are the ten published last year that were viewed the most, with a countdown to the most viewed, because it's more fun!  I promise, for the non-believers, that they're not all Walking Dead related; only 4 of them!

10. What To Avoid in Social Conversation - a tongue in cheek Twitter Tips post, based on Victorian/Edwardian society etiquette. (1121 views)

2.  Wasteland is Live! - introducing Wasteland, which I published in April. (2087 views)

1.  Pauses for Thought: 10 pieces of advice for new writers/self-publishers  - I'm actually quite proud of this post, and have had a great deal of feedback from it, saying that it's been most helpful.  (2418 views)