Review: #TheWalkingDead S10:05 WHAT IT ALWAYS IS #TWD #TWDFamily 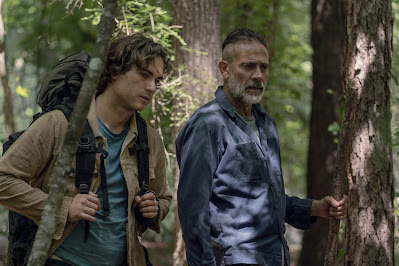 'The enemy of my enemy is my friend'

A slower episode with some outstanding moments, the best of which centred around Negan.  'Can't say that I ever remember rating Walkers on hotness—besides, she's clearly a 3.' 😆😆  Made me laugh out loud! 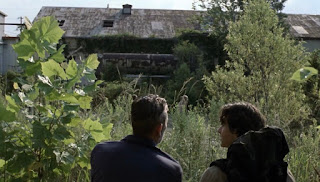 Yes, it's a long time since the Sanctuary... and Negan is one of the few (like Carol, and Judith, of course!) whose appearance shows that seven harsh years have passed since the war ended. 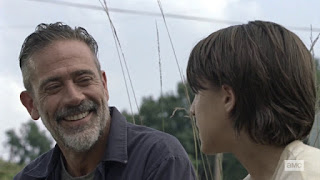 When he was reminiscing about pre-Walker days with the boy on the bus, I noticed how the lad scarcely spoke, which made me think about the generation who've known no other life, and haven't managed to find an Alexandria or a Hilltop.  Nowhere to learn the communication skills that most kids pick up automatically: no TV, no school, no peer group with whom to exchange information and views ... if you've ever wondered how Alpha gathered her tribe, I'm guessing they must have been people like this boy and his mother—wearing the masks of the dead being preferable to becoming one of them.

I was glad this was a 'light' episode, not one of those taking place mostly at night that have me peering up close and rewinding to be sure of what's going on (and that's on a 55" screen).  During, it was the first time I really got the feeling of this being a way different show from the first five seasons, with it featuring no Michonne, no Carol, no Rosita, no Gabriel, scarcely any Eugene or Aaron and not a great deal of Daryl. 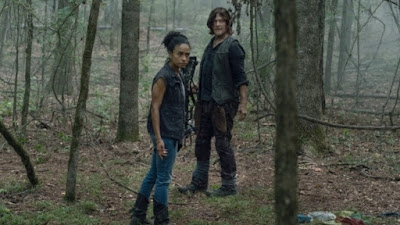 Negan was totally the star—and Blaine Kern III played an absolute blinder as Brandon, the Negan-in-Waiting.  I was amused by how the stories of Negan's glory years have become embroidered over time, with Brandon thinking that he actually had cut off Carl's hand, then shot him.  Of course, though, Negan would never kill a kid, ohhh no.... yes, I know this was on last week's review, too, but we need to remember!  It's true that his mellowing seemed more convincing this week, but... 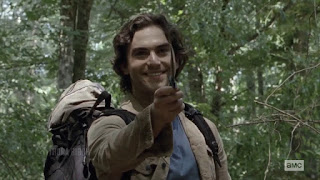 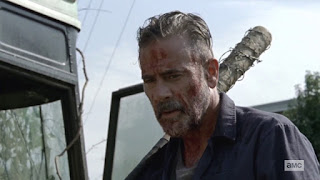 I know Negan had to get rid of his 'pasty, creepy-ass face' (😆😂!!) for the sake of the plot, but what a shame.  Should've kept him and got rid of boring Yumiko instead ... feels like she's just another tick in the Strong Female Lead box, but with a likeability factor bypass 😴; she's no Michonne, Carol or Rosita.  And I don't get why the guys at the Hilltop appeared to be deferring to her; she's only been there five minutes.  I get that she's one of the main fighters and the place is in disarray because poor Ezekiel has other stuff on his plate (like heartbreak and thyroid cancer) and so probably isn't running it as efficiently as Maggie or Tara did, but...?

TWD: please stop killing off the good characters, and please allow what's left of the group from the first five seasons to stay alive!

Talking of Ezekiel's illness, this is possibly the first time we've been shown this so starkly—that in the new world life expectancy is much shorter, even without the Walkers. 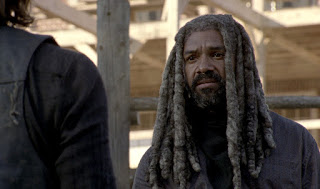 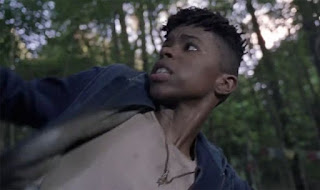 Talking of newer characters, it was good to see a bit more Kelly this episode; I like her and Connie, and Daryl's Merle fishing story was a nice little extra for those who hope him and Connie will get together.  You can definitely see something there... not the deep, deep connection that he has with Carol, but something new and good for him.  I'm still 80% #Caryl—though I strongly suspect that it will be a long time before Daryl has a real love interest, if ever. 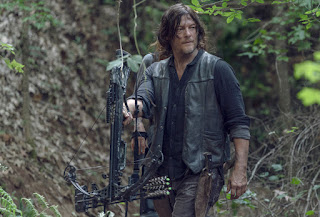 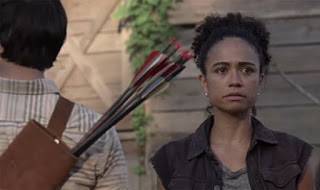 Now, Aaron and Gamma... with the latter being instructed to respond to the Man With The Metal Arm in a way that will convince him that's she's maybe not so Whispery after all.  Doesn't bode well.  Then again, she is still haunted by the killing of her sister, and who can resist the lovely Aaron?  Maybe this part of Alpha's long game of little 'nicks' won't go as smoothly as she hopes. 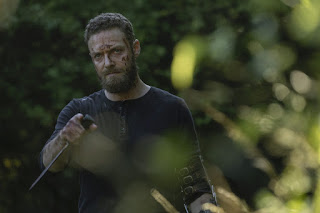 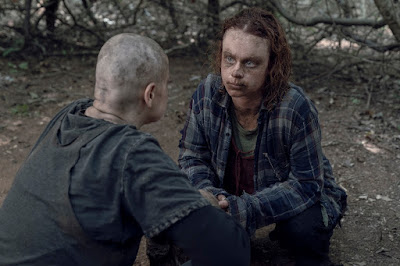 I liked seeing more of the world outside the walls of Hilltop and Alexandria in the light; the way everything is damp, overgrown, and as nature intended. The aerial shot of that bus and the vehicles beside it showed how rusty and useless the old vehicles are now, relics of a lost world, with vegetation growing around and through them. 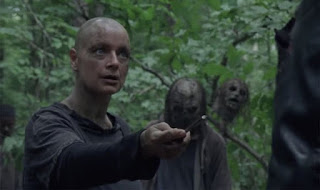 Other great moments:
Most of all, of course, the final scene—Negan and Beta meet at last!  'Alright, you big-ass freak, let's do this'.  Excellent!  But will they be friend or foe?  I'm not even going to guess (ps, okay, I think he'll pretend to be on board with them, but really take them down!) 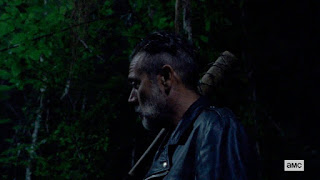 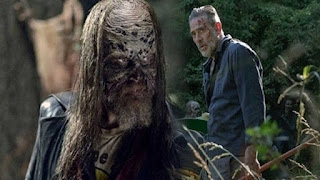 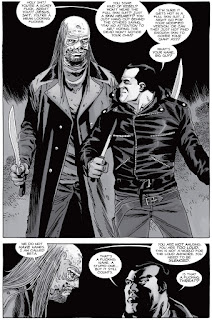 Somehow, though, I feel like I'm still waiting for this season to get started; will it all kick off now?  I loved the first two episodes, but (Negan aside) the last two, and parts of this one, have not quite enthralled me as did every episode of Season 9.  I've liked them a lot more than those early episodes of S8 (which I consider to be the show's lowest point), but for me the weak points have been too weak. But what the hell; after nearly a decade you can't expect to adore all of every episode—and, on rewatching, I whizz through the Lori hallucinations in S3 and Beth's suicide attempt in S2, for goodness sake!

However, I'm confident that there will be more great stuff to come; all the signs indicate brilliant storylines.  I just hope that the Whisperers thing is not stretched out for a half season too long, like the Saviours War was, and enough screen time is given to the characters we know and love.  And Earl, for instance, could become a Hershel Mark II, Alden hasn't had enough development yet, it's time Rosita got to strut her stuff again, and what about this Dante guy?