THE BEST SALES PLOY EVER


....I bet you thought I was going to tell you how to sell tons of books, didn't you?  Well, it's nothing to do with that! 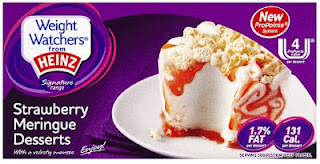 They are about 130 calories each (lots of different sorts, my current favourite is the strawberry meringue).  They come in packs of two, and they're GORGEOUS.


The clever sales ploy is putting them in packs of two.

You're trying to lose some weight and you see them in Morrissons and you buy them.  At only 130 calories they can't do any harm, can they?  Later on you eat one, and if you're quite strong willed you save the other one until the next day.  Then, because they're so lovely, next time you're in the supermarket you buy two packs of two; maybe the strawberry meringue, and the chocolate brownie.

Back at home you're not quite so strong willed as the day before, and this time you eat one after dinner, and the other one from the packet a few hours later, whilst watching telly.  Next day you remember how lovely they were, and eat the third one at lunch time.  Followed by the fourth one at about four pm, because they're only 130 calories each, and that's quite reasonable for an afternoon snack, isn't it?

You have now eaten 520 calories worth of zero nutrition, probably extra to the calories you would have otherwise eaten had you not discovered Weightwatchers desserts.

Thus, you don't lose any weight.

Thus, you resume the diet the following Monday.  Diet resumed (in your head, anyway) you know you'll need low calorie ways to satisfy your sweet tooth.  So, whilst in the supermarket buying all your diet food, you buy a packet of Weightwatchers desserts, promising yourself that you will only eat one per day after dinner.  Of course, you don't.

And so it goes on.

I can see myself buying these lovely, wretched little things forever.

The current outrage against fake reviews...


..... and those that people pay for, which amount to the same thing - they're all fake.

This is what I think:

Yes, the whole practice is appalling, but I'm not joining in with the pitchfork waving on various blogs, or the signing of petitions, and nor shall I adopt the phrase 'sock puppet', which is already over-used.

For a start, they're few and far between, which is one of the reasons we hear about them when they're brought to light.  We worry that they will undervalue the 99.9% of reviews that are genuine, but they probably won't.   Don't forget, most people who have Kindles probably don't even know about all this; remember the LendInk row?  Has that had any lasting effect on any of the authors involved?  What's that?  You've never heard of it?  There you go, then.

Yes yes, it's amazing that John Locke has admitted to paying for some of his, but it's probable that his books would have sold as many without them - he had LOADS of great contacts, was one of the first to do the ebook thing, and I daresay his books are highly saleable anyway.

The people who resort to paying for reviews or writing their own fake ones are to be pitied, and educated, perhaps  - how bad does your book (or, more likely, your marketing) have to be, that you can't get proper reviews for it?  Posting fake ones won't do them any good in the long run; rather the opposite.  If people have bought a book on the basis of its 20 five star reviews, then find it to be crap, they're more likely to feel annoyed and write a bad review.  Also, they run the risk of being outed, as happened to RJ Ellory.  Incidentally, he was doing well anyway - must be some kind of nut!

Eventually, the scum will rise to the surface; and it won't affect YOU, either.  I think people are forgetting one thing: the reading public/Amazon customers (which includes authors, too) is/are not stupid.  If a book has 10 5* reviews on the week of its publication, from people who have reviewed nothing else, (ie, from neither reviewers who received pre-publication review copies, nor loyal readers who've been looking forward to it) we KNOW some of them are likely to be fake.

Does 'fake' also run to getting all your mates to write great reviews, even if they haven't read it?  - ah, here we come to a blurred line.  If a friend of yours reads your book and loves it, then chooses to review it (maybe with a little prompting from you), does that make it a 'fake' review, too?

Since I've put my books out into the world,  I've gained a fair few readers who read them all, recommend them to others, and write reviews of them.  I've got to know some of them, which is great.  Some have become online friends; lovely!  Are other, already existing friends who read your book only because they know you, then write a review because a) they've loved it and b) you asked them to, really any different?  I'm sure you'll agree it's a grey area!

But back to paying for reviews.  Yes, it's a dreadful practice, and all I can say is more fool the writers who pay these scumbags to do such a thing, thus enabling them to earn money from idiots who should know better.  As for creating fake profiles to write good reviews for yourself and bad ones for 'the competition' - well, perhaps if they spent that time working on making their own books better, they wouldn't need to.