How to Write a Romcom Bestseller in One Easy Lesson! 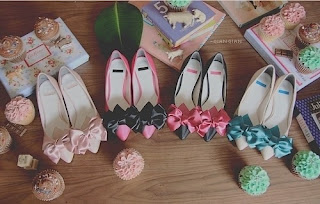 
★.:*´`*:.☆
1.  Get the feel right first.  Read the early Jilly Cooper books (Harriet, Prudence, Octavia, etc), Bridget Jones' Diary, a bit of Sophie Kinsella and others of your choice, preferably whilst wearing kitten heeled shoes and eating cake, to get yourself in the zone.
★.:*´`*:.☆

2.  Next, choose your title.  Fifty percent of chick lit novelists simply select two items that begin with the same letter, one of them food/cocktail related, the other to do with clothing.  Here are some suggestions for yours:
Mojitos and Manolos
Long Island Iced Tea and Leotards.
Angel Cake and Anoraks
Banoffee Pies and Barbours
Prada Heels and Pop Tarts
Tangerine Cheesecake and Trench Coats
See how easy it is?
The other option is to slip the word 'kiss' into the title, preferably with a reference to Mr Darcy ~ Kissing Mr Darcy, It started with a Kiss from Mr Darcy, Mandarin Cupcakes and Mr Darcy, etc etc. Any mention of Mr Darcy in the title will make your book a certain hit.

★.:*´`*:.☆
3.  Choose your heroine's name.  This should be one you might have given your dolls when you were a child, and will probably end in 'ie' or 'y' (or possibly 'ii'): Tillie, Poppy, Polly, Katie, Lucie, Tansy, Suzi - you get the picture.  The hero's name should conjure up a picture of smooth masculinity ~ Ross, Michael, Jared, Max, Daniel.  Darcy is always a good surname.  Just saying....

★.:*´`*:.☆
4.  Decide on names for heroine's chums.  Be creative. Sky, Jo-Jo, Tallulah, Pippa, Jools.  To go with the slightly offbeat name, at least one chum should have an amusing quirk that can be referred to sporadically throughout the book - having a 'thing' about firemen, swearing a lot, being gay, etc.

5.  Now, you need a plot.  First, establish general 'ditziness' of heroine, who should be pretty but not too perfect.  In the first or second chapter she should meet her handsome prince to be.  This meeting could take either of these forms:

★.:*´`*:.☆
6.  If set in the UK, be aware of class differences.  Use as many ridiculous stereotypes as you like: ie joke 'posh' names like Fortescue and Carruthers, double barrelled surnames with double Fs and Smythe as the second one. Ffossington-Smythe, that sort of thing. Mention barbours and grouse shooting.  Men can be called Sebastian, Piers, Giles, Ffreddie, and the women Arabella, Ffenella, Ffiona, Caroline. Working class men should be called Wayne or Dave. Women can be Kylie or Chantelle. Mention Eastenders and football.  Both sexes will have tattoos and fake tans, and drop their aitches all the time, which they will pronounce 'haitch'.
★.:*´`*:.☆

7.  During story, heroine should have several more instances during which she says absolutely the wrong things to people and loses other items of clothing, or parts thereof, in inappropriate settings.  Further wrong-place-wrong-time interludes can be manufactured to perpetuate comedic suspense, including zany mishaps where your heroine burns food/gets mistaken for an international diamond smuggler/accidentally lets out dangerous animal during trip to zoo, etc.

★.:*´`*:.☆
8.  Reinforcement of hilarious misunderstandings can be inserted into dialogue, in which main characters find themselves unable to express what they are feeling/thinking, rarely stick around to discuss anything, and flounce out of the room/into taxis/onto trains at the merest slight, like they do in soap operas. When female characters are upset, other females should attempt to commiserate by offering pinot, chardonnay, cupcakes and ice cream.  Chick lit heroines are never so miserable they can't be cheered up by sugar, and will only ever get woefully drunk about once, which will provide opportunities for more slapstick comedy.  She might also pinch cigarette off Sky/Jo-Jo/Tallulah, who could be the novel's token smoker (this could be her quirk - see how it all fits in?!).

★.:*´`*:.☆
9.  At some point, all misunderstandings, etc, must be resolved just in time, possibly just when heroine/hero (or both) is just about to leave area forever/marry hopelessly unsuitable secondary character (males should have boring name like Hugh, Neville or Roger).  Is extra effective if heroine happens to be mucking out pigs/covered in paint, or any other situation in which she might not look at her polished best, and can't believe this handsome, suave, perfect man adores her.  Don't forget to gather all the ends up quickly, just in time for the HEA - happy ever after!

★.:*´`*:.☆
10.  Once you've published it and sold thousands of copies you can then think about the sequel - the Christmas version!  Write it the same as you've written the original, but substitute all the summery bits for snow, mistletoe, mulled wine, etc. Your title could be Manolos and Mulled Wine, A Christmas Kiss from Mr Darcy, Mojitos and Mistletoe, Furry Boots and Frappuccinos, etc.