My Life In Magazines


(I got the idea for this post from Twitter friend Katie Oliver, who very kindly said she didn't mind if I nicked her idea!  Here is her post:  http://katieoliver.com/ko/?page_id=27)

I adored magazines, all through my teens, twenties and early thirties.  I loved reading the beauty articles, sure that if I did all the stuff they said I would be beautiful - now, of course, I see that their purpose is just to get you to buy the products.  How jaded one becomes!  But buying Cosmo, Elle, Honey, etc used to be such a pleasure of mine.  One thing I really enjoyed was getting the new copy of Slimming magazine and reading it whilst eating a bag of assorted toffees.  Don't you just love all those obese-to-slim true life stories - wow, did she really eat all that??! 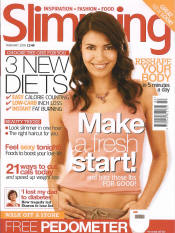 I rarely buy magazines these days, because I don't particularly want to read about  how to get my man, or, when I've got him, what he might or might not want to me to do behind the bedroom door... neither am I interested in career vs children articles, as I am past the age where I give a stuff, and the last time I made anything from a cookery article was in 1985 - the malibu milk jelly with the consistency of a rubber tyre was quite enough, thank you . 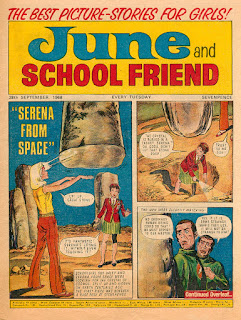 When I was a child, my sister and I used to get June & School Friend every week.  We actually got it between us - I can't remember us ever arguing about who read it first, though - maybe it was automatically Julia, as she was the eldest!  I can't remember anything about it at all, apart from one story called 'Swimming To Fame', about some girls who competed in swimming competitions (duh-uh!).  I was fascinated by all the different strokes, particularly the butterfly.  Didn't do me any good - I never got past half a width with a rubber ring!

From this children's comic we moved on to Jackie, which we got from about 1968 to 1971. I was a bit too young for it (age 9 in 1968) but young teenage magazines in those days weren't as they are now; the most risque thing you might read about was whether or not to snog on the first date. 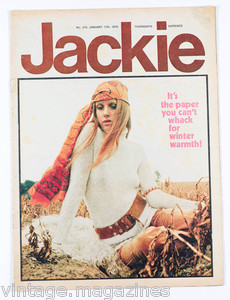 What most people remember most about Jackie is The Cathy & Claire Page - yes, the problem page!  How can I make him fancy me?  Why hasn't the boy I met on holiday replied to my letters?  How I longed to be grown up like those 13 year olds, wearing white lipstick and bell bottom trousers and going out with boys!  Then there were the pin-ups on the back page - long forgotten names like Jack Wild, Ben Murphy, George Best... and David Cassidy, of course! 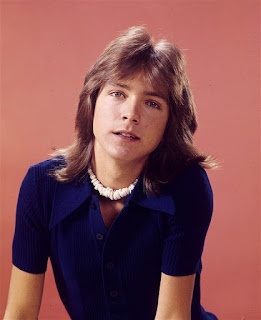 By the time I was 12, I had my own magazine.  Every Saturday evening, all to myself - the wonder that was Fabulous 208!  Dig that groovy frock! 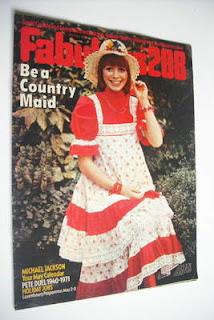 Fabulous 208 was, as well as being a teenage mag, all about Radio Luxembourg (the frequency of which was 208) - I used to listen to it all the time, with DJs Kid Jenson, Dave Christian, Mark Wesley.  I adored this magazine.  Saturday evening when it arrived was the highlight of my week. My friend Sally and I used to ring each other up to discuss what was in it, cut out the pictures, etc... ahhhh!  These sort of magazines often featured some column allegedly written by a pop star - I think there was a David Cassidy one in Fab 208!  My friend Sally used to insist it was really by him - even then, I knew it wasn't.  Oh dear, maybe I was born jaded...

Another big favourite around this time was Disco 45, which was, if I remember rightly, just full of all the lyrics to songs in the Top 20 - I never sang, but I think I used to follow the lyrics when I heard the songs on the radio! 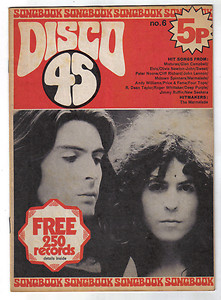 I then moved on to more girly magazines, none of which existed after the mid 1970s: Valentine, Mirabelle, Petticoat - and Romeo, and Look Now, but I couldn't find any pictures of them.

It's a pity these pictures aren't a bit bigger; then you'd be able to see that they cost about 8p!

I must just move back for a moment here; I remember going to stay with Julia's godmother in the summer of 1971, when I was just 12, and sitting in her conservatory sneakily looking at a copy of her glossy, glamorous Vanity Fair... 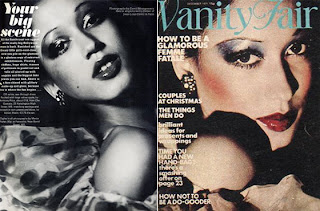 .... and reading this article, furtively looking up to make sure no-one caught me reading it.  It was about a new book that had just been published called The Sensuous Woman, by some bird called 'J'.  In the interview with her she talked about oral sex - and I really, really did think that oral sex meant talking about it....

Back to the mid-seventies - who remembers those magazines you could buy in weekly parts, followed by all the binders to put them in?  My first serious boyfriend used to buy Supercook ~ 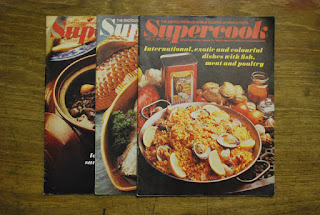 We collected them faithfully, every week for what seemed like ever - I think I made about 4 things out of them!  Jiffy Tuna Surprise, Arroz Con Pollo, American Apple Pie, and some thing with pork chops and wine - and that's it! Jiffy Tuna Surprise (or just JTS) became our staple meal... tuna and onions and garlic and basil and curry powder, I think - I can still taste it! 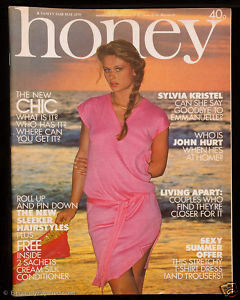 .... and, of course, the wonderful Cosmo!  That magazine taught me so much - I kid you not!  In this article I've tried to pick issues with the covers that I actually remember, and I loved this one in 1976 of Jerry Hall; I believe it came out around the time she danced with Bryan Ferry in the video for Roxy Music's 'Let's Stick Together' - that was in her pre-Jagger days, of course. 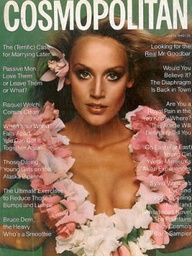 In the 1980s I also used to read Company (one of the best, I think), and Options - and I was also introduced, by my boyfriend of the time, to The Fabulous Furry Freak Brothers... 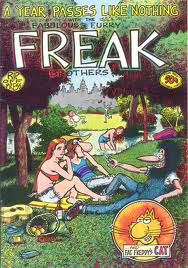 ... and I remember, one day in the late 80s, my brother coming round with this brilliant new publication he'd discovered when he'd been up north : 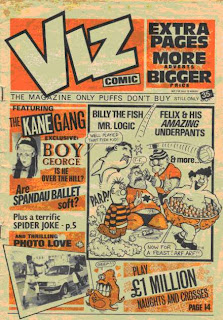 It was only about twelve pages long at the time, until it caught on and became available everywhere.  I still buy it now, sometimes.  My favourites are Modern Parents, The Critics, the Drunk Bakers, Mr Logic - and then there are the old favourites like Sid The Sexist, Paul Whicker the tall vicar - and the Pathetic Sharks!  I still love the Top Tips, too :)

From about 1988 to 1992, going to see rock bands became a huge part of my life, and I used to buy Kerrang every week, along with Metal Hammer sometimes - though that was more heavy metal orientated, whereas I was into rock rather than metal, though of course there are areas where the two cross over.  Q came out around then, as well, though that was more of a serious music magazine.

That's pretty much when I stopped buying magazines on a regular basis.  I moved onto Marie Claire for a while, but I found that, by then, I just wasn't very interested in many of the articles.  I find that many of them in such magazines as Red, She, Elle, etc sound as if they're going to be really fascinating - and then they're just not.  Either that or I've read them all before - or just, quite simply, that they're aimed at people younger than me.  So often I've bought one, finished reading it in about half an hour and thought well, that was a waste of £3.60, or whatever it cost.  Much of them, now, is just advertising - and I don't just mean the adverts.  I think the best women's glossy now is probably American Glamour, which I do get occasionally - I'm not ready to go onto Saga yet! 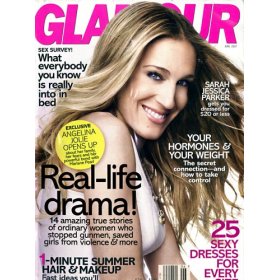 I'd love to go to one of those fairs where you can buy old issues of the magazines and comics of your youth.  I've still got a Jackie annual from 1973 - but I'd never sell it.  Well, it's got an article written by David Cassidy in it.....