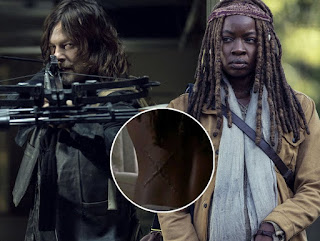 The answers we've been waiting for since episode 6 - and, true to TWD form, the reason for those scars and the rift between Alexandria and the other communities was NOTHING like I expected!  Thanks to Corey Reed and Vivien Tse for writing and to Millicent Shelton for directing this unusual and fascinating episode.  I expect comparisons with The Grove; very different, but equally as shocking and as well executed. 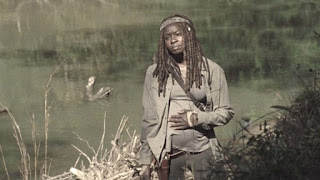 I love a dual timeline; it's a structure that can be so effective (as in S6:1 First Time Again, my all time favourite episode) and Scars was a perfect example, as the two stories unfolded alongside and finally came together, when we at last learned why Michonne is as she is now...and who could not feel understanding for her?  I try to avoid spoilers, but I'd seen that Michonne killed children to save herself and Judith, and wondered how it could happen while maintaining our sympathy for Michonne, but it absolutely worked - Michonne's torment was heartbreaking. 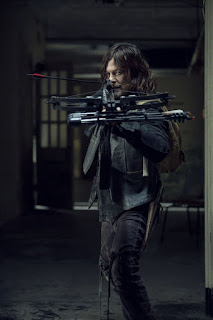 The strong emotional ties between Daryl and Michonne were so evident in this episode; after all they had been through over the years, losing and searching for Rick cemented the bond, and their shared secret even more so.  The short exchange between Daryl and Aaron was equally touching; as ever, with TWD (one of the things I love about it), the depth of friendship was conveyed in the eyes, the brief touch of hand on shoulder, rather than in schmaltzy words. 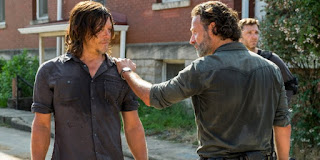 (btw, now we know the real reason for Michonne's new hairdo, i.e., to avoid confusion between the colourful now and the sepia-tinted past.  It's okay, though; we would have been able to tell the diff, because six years ago Daryl's shirt still had two sleeves.) 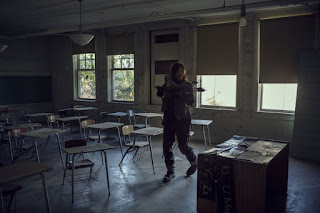 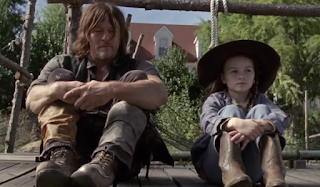 A round of applause for the lovely scene with Daryl and Judith by the water; shortly afterwards Judith exhibited more of her best Grimes traits by taking off on her own to help the friends of Alexandria - Carl going off to kill Negan, anyone?

...and what a good case for nuture over nature, as Negan pointed out to Michonne that Judith is exactly like her mother, and not one to take shit lying down.  (Real mom Lori was better at making dinner and caustic asides.  There was the time she went to rescue Rick from rescuing Hershel, but she had to be rescued by Shane.  No, I'm being too harsh; having Judith in the first place was brave, in itself.  And I got to understand/like her more as I watched S1, 2 & 3 again.) 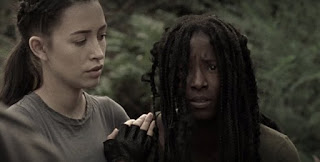 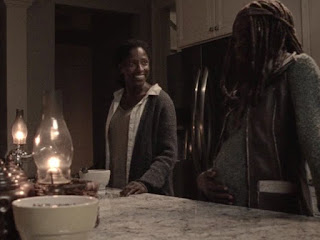 When Michonne's old pal was first allowed into Alexandria (yes, Aaron, you were right, as ever), we were given no idea of how insane she really was, i.e, bringing up the kids to know that the strong survive and thrive, and that stringing up, branding and slashing at pregnant women is the way forward. 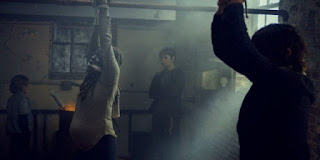 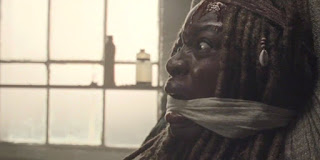 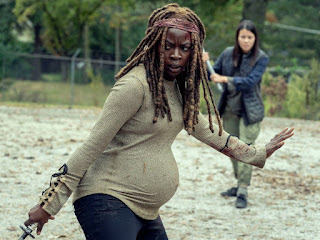 Particularly pertinent that they escaped through the manhole cover.  That whole scene when Michonne was crying out to Negan-in-waiting Linus, 'I don't want to have to hurt you' was so-oo good.  I'm gutted that Michonne is leaving in Season 10, but I hear she may join Rick - hope so.  With Judith and RJ too, preferably, though Judith would be a great loss for the show, too.  Love that she remembered exactly what happened, all along. 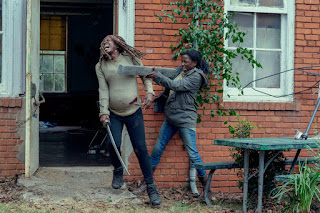 Other stuff I liked: 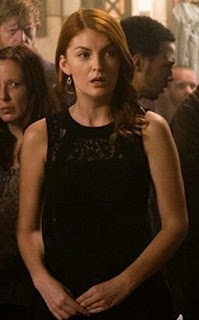 Incidentally, I notice that TWD episode 14s are always particularly good, a sort of coming together/blowing up of all that has happened in that season, before the crescendo of the last two episodes - like when Morgan and Rick's pain reached boiling point in S8:14 Still Gotta Mean Something, Maggie finally talking to Daryl again and Sacha and Rosita making up in S7:14 The Other Side, and the real start of the Negan war in S6:14 Twice As Far.  If you binge-watch the seasons again, you really get to notice the structure of the whole.

Meanwhile, back at the Kingdom...
...the Whisperers know where you are... 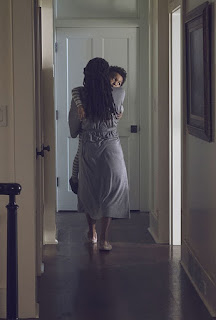 And finally - talking of all that Daryl and Michonne have been through together, here is a look back at a few of those moments - from the wild woman who turned up at the prison, until the saddest moment of all. 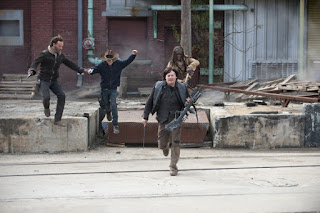