Oh, the joy of Netflix!  I watched all of Boardwalk Empire when it was on real telly, and loved it so much that we are currently watching it all over again; I have a five episode a night habit.  If you haven't seen it yet and love anything to do with gangsters, American history, political skullduggery mixed with complicated personal relationships, and just totally excellent drama, I can't recommend it too highly. 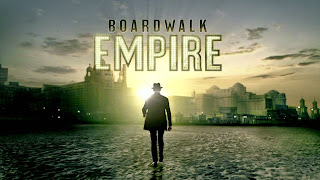 Although I know what happens I'm enjoying it even more this time round; I'm noticing more subtle nuances of plot and dialogue (a bit like you do when you read a book for the second time) and appreciating the terrific locations, clothes, atmosphere ~ and the carefully chosen song at the end of each episode (yes, we have the soundtrack...!) even more.  Choosing my top ten favourites characters was difficult but great fun, so here they are! 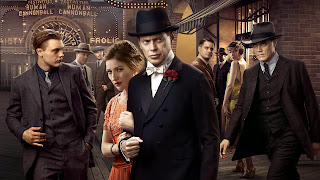 10.  Dancing across the stage in her best flapper gear at number ten is every feminist's worst nightmare, showgirl and professional girlfriend Lucy Danziger, played by Paz de la Huerta.  Completely over the top, calling all the men she slept with 'Daddy', but didn't you feel kind of sorry for her near the end of her run in the show, when she revealed how she she wanted to mean more than just 'a bit of whoopie' to someone? 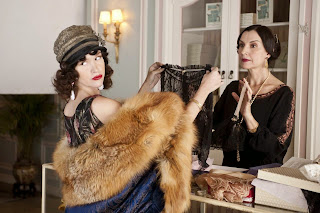 9.  My choice for number 9 is a more minor character, but I think she's great ~ Sigrid Mueller, she of the over the top Norwegian accent, played by Christiane Seidel.  What I like about her so much is that she's quietly got her head screwed on, and susses out exactly what she and Nelson/George must do in times of dire circumstance.  Like when she whacked that poor cop over the head, then realised their only choice was to kill him ("I will hold his legs"), and started up her own sideline when she and George/Nelson had to start distilling in their flat for O'Banion.  I went off her in the last series when she had a personality metamorphosis into a total bitch, but I loved her before that. 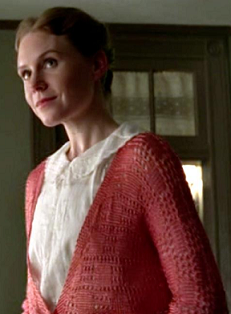 8.  At number 8, I am delighted to present the best totty in the series, the gorgeous Owen Slater, played by the even more gorgeous Charlie Cox.  I never liked Margaret Schroeder/Thompson (far too self-serving and sanctimonious, mostly), but I loved the restrained passion between them, and so wanted their plan to run off together to work.... 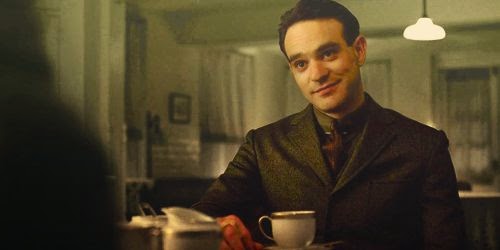 Oh, go on then, shall we have another picture of Charlie, girls? 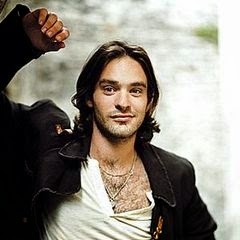 7.  I've edited my original post because I was only on series 3 when I wrote it, and had forgotten about the fab Sally Wheet, played by one of my favourite actresses, Patricia Arquette, who has adapted so well to playing older parts and not gone down the 'botox and trout pout to try and look as if I'm still twenty-five' route.  I LOVED Sally - the sort of woman most of us wouldn't mind being at some point, I think! 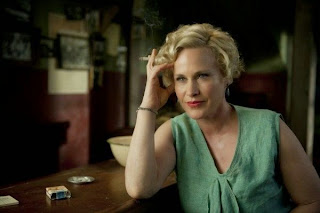 6.  The King of New York City is at number 6 ~ Arnold Rothstein, played by Michael Stuhlbarg.  The man who always wins, working out his plans to defeat his enemies, and giving strategy lessons to his underlings, at the snooker table.  How could you not admire a guy who fixed the World Series, and got away with it?  So cool, like a super confident, clever snake, but somehow likeable, too.  Wonder if he really was that charismatic...

"Do you think I entered into this arrangement because I value your companionship? You are a convenience, of geography and supply. You promised a quantity and a price. You have failed to deliver! And now, owing to your inability to manage your affairs in New Jersey - a state I have little interest in or affection for - you expect me to start a war? In New York? Where things actually matter?" 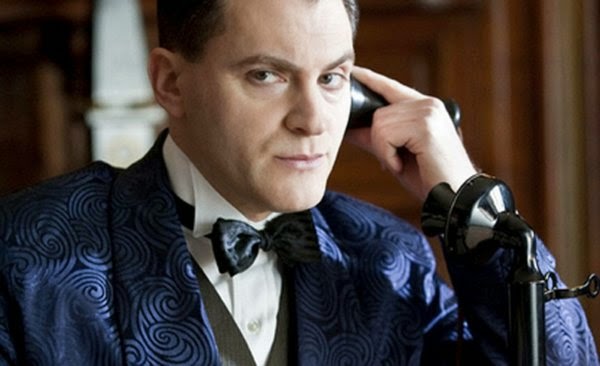 5.  Yeah, I know she's a murderer, a liar, probably insane, and actively encouraged her son's Oedipus complex, but I can't help liking Gillian Darmody.  Not sure what that says about me...  anyway, with a start in life like that (being pimped out at the age of thirteen), her story was bound to be tragic.  Maybe I just like her because she's so beautiful in that delicate, cat-like way, and looks so fab in all her clothes!  But she was clever, too, when it came to dealing with men like Luciano and the monster Gyp Rosetti.  I could have seriously gone off her when she murdered that poor lad Roger, but I couldn't help feeling sorry for her when she finally got her comeuppance.  Played by Gretchen Mol. 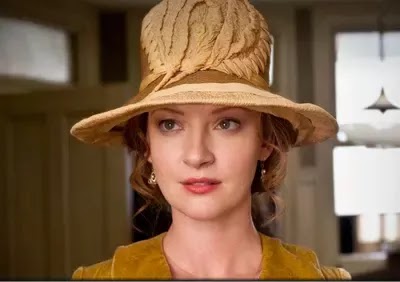 4.  Yes, strolling along the boardwalk at number 4 is the unofficial boss of Atlantic City, our very own Enoch Thompson.  Some reviews/articles have said that he's the least interesting character in the whole show, but I disagree.  Nucky's as multi-faceted as they come, one minute revealing his insecurities to Margaret, the next showing how ruthless and calculating he really is.  I've just finished watching series 3 in which it all goes tits up for him, for a while, and he becomes even more 'human', but then his clever negotiating skills win through.... a round of applause for Steve Buscemi. 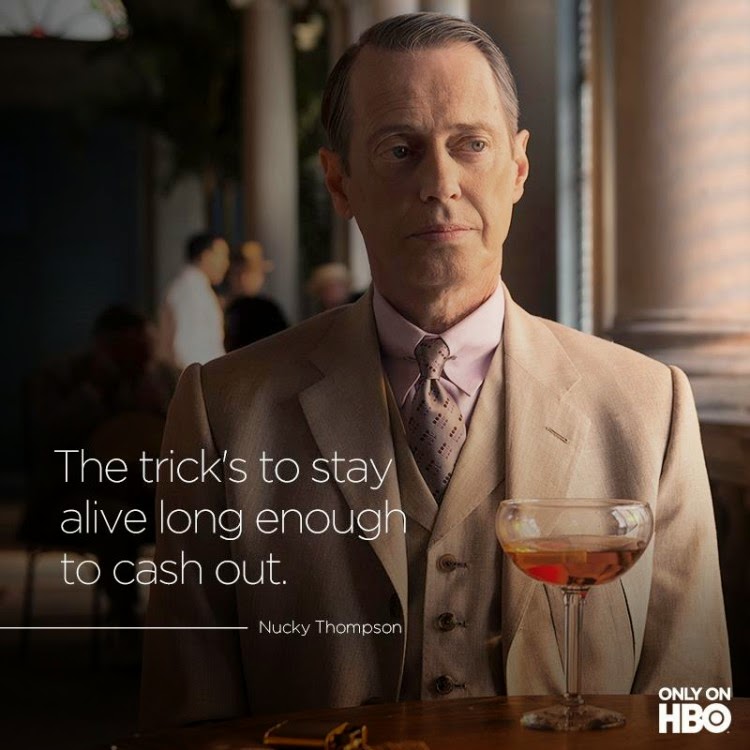 3.  How could you not love Richard Harrow?  Played by Jack Huston, he's probably the most likeable character throughout, and not just because he's a war hero with a broken face.  He's got the monopoly on those moments that bring a tear to your eye, a thoroughly decent chap who always does the right thing, but no pushover.  Love that he's a sharpshooter, too.  When Nucky asked him how many people he'd killed he answered "63" straight away, totally deadpan.  His demise was so sad... but kinda nice.  Saddest and most tear-inducing of all was his scrapbook of family photos.  One of my other favourite scenes with him was when he went into the woods to shoot himself, but got talked out of it by the wise old woodsmen. 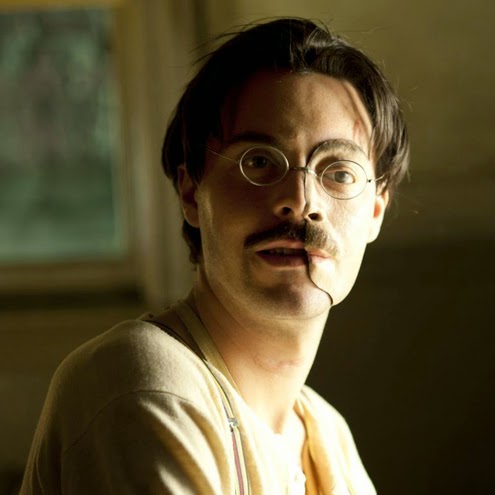 2.  Ah, deciding on which would be number two and which would be number one was hard, but here's my runner-up ~ the fabulous Nelson Van Alden.  His story, played so cleverly and not without a little humour by Michael Shannon, runs alongside that of Nucky's; I could have done a neat little 'contrast and compare', I suppose!  I'm sure everyone loved the way his straitjacket finally came off; he's one of those characters you're willing to smile all the way through.  Last night I watched the bit when he finally tore the ghastly Faraday Electric Iron Company apart.  The 'Prohi' who ended up very much on the wrong side of the law and seemed happier for it - love it. 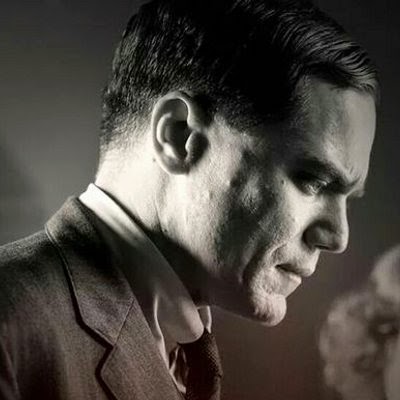 1.  My man!  Totally worthy of the number one position is the wonderful Michael Kenneth Williams, one of my favourite actors, as Chalky White.  Last night I watched him talking to Nucky about his plans for the Onyx Club, in which he said he was going to have "chandelabras" all over the ceiling.  Nucky says "You mean chandeliers".  Chalky replies "I'm going to buy 'em, not spell 'em".  I love the way he dresses, the way he's scary but oddly sweet, too, and his relationship with Nucky is sometimes curiously touching.  Oh, and as for his pride in the Onyx Club, and his falling in love with Daughter Maitland ... 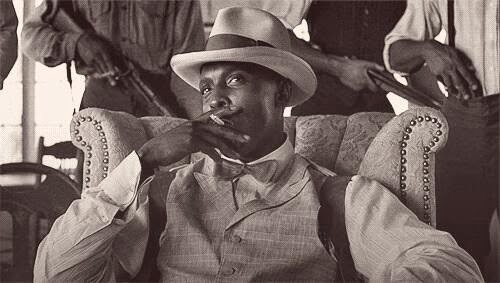 Nucky: I didn't know you were so sensitive.
Chalky White: As a baby's ass, motherfucker 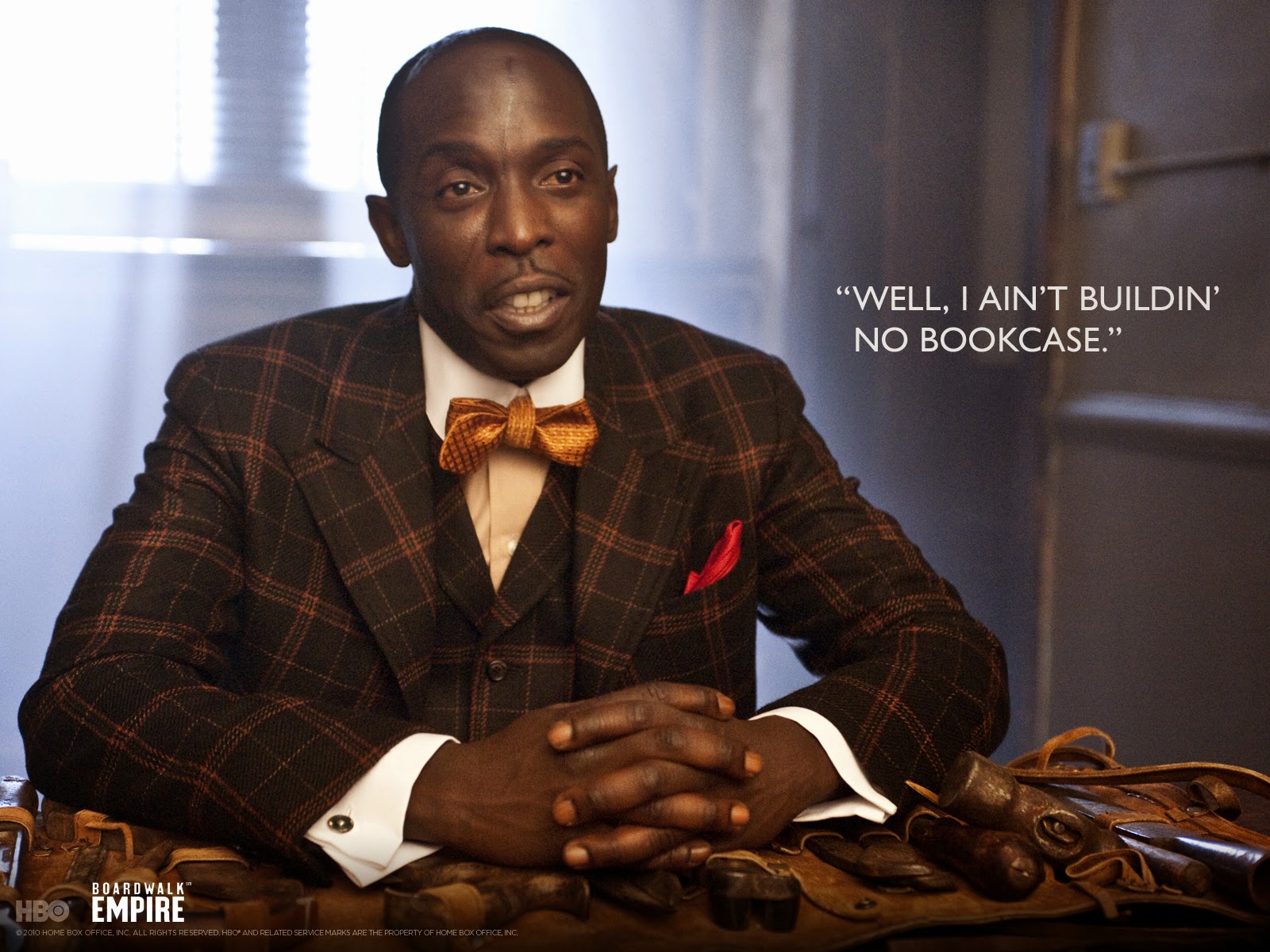 ....just outside the top ten were Mickey "How come you're still alive?" Doyle, Meyer Lansky, the curious Gaston Means, the Fed who pretended he was in love with Gillian, Frank Capone (because he was so lush), Johnny Torrio, the grown up Tommy Darmody....


If you haven't watched it yet, you should! 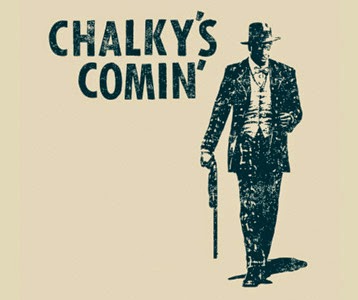