'Starting over is about killing every one of you' Review: WORTH #TheWalkingDead S8:15 #TWDFamily 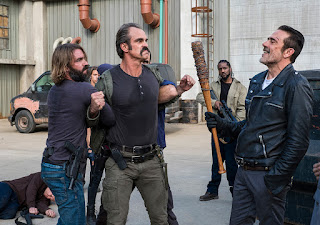 OMG, as they say ~ and, having looked forward so much to the comeuppance of Simon, it was almost an anti-climax compared with what's coming!  Didn't you just love the Negan whistle from behind the big black bin?  And Simon was still chattering away even after he'd turned.  Shame to see Steven Ogg go, though; I loved the character and he's such a good actor. 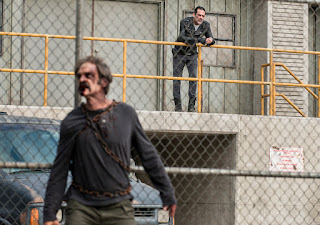 So Gregory 'wandered off into the wilderness with his dick in his hand' and a diagram showing all that mis-information that Negan had fed Dwight ~ yes, we were right, TWD Family (thank you, Shelley!), it was Laura Saviour in Negan's car.  I did think, when Negan outlined The Plan, that it seemed like he was being a bit too specific about times, etc, but I didn't guess it was a trick.  Clearly I do not have what it takes to run the Sanctuary. 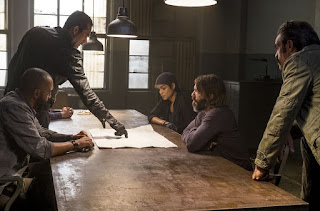 And so to Eugene.  I was a bit baffled by Daryl and Rosita's slow saunter as they escorted him; given that they feared he would already have been missed, I expected more urgency, or at least some hiding in shop doorways/looking for a vehicle.  And yes, Rosita had his sicked up, garlic-laced macaroni cheese all over her shirt, but she was still fairly slow off the mark when he made a run for it, and that big, lumbering goon is hardly difficult to chase.


There's no covering up his treachery with excuses of being scared anymore, and he didn't even try; by the end of the episode, he almost out-Neganned Negan in his determination to make enough bullets to kill everyone.  Remember when Rosita said, back in S5:5 Self Help, that people had died trying to get him to Washington?  He could name them all but showed no remorse; Eugene's only ever been looking out for Eugene.  Negan is his Abraham replacement, that's all; his protector.  His sticky end will be cheered even more loudly than Simon's... then again, I could be wrong; Twitter friend Andrew thinks Eugene might turn out good in the end, and be secretly working against Negan.  It's a nice thought!


Even back then, he knew what he was doing... 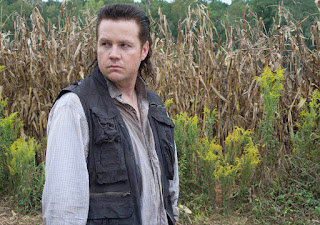 Talking of Walkers, I have a question to ask Aaron.  Why, instead of staggering towards that small pack in the woods to kill them with a stick/your bare hands, didn't you just run?  I've occasionally had cause to wonder this, the most curious example being when Tyreese came across those two guys fighting them on the road to Terminus in S4:10 Inmates.  The last one to get bitten was the chap who told him, Carol, Mica and Lizzie to 'stay on the tracks'.  Next time you're watching it, observe how easily he and his friend could have just... run away.


'Stay on the tracks, you'll get to this great place.  Nice mock railway carriage aparments, and as much meat as you can eat.' 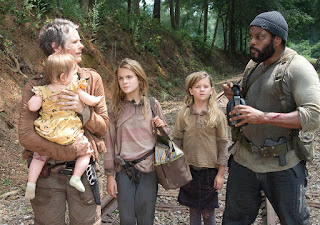 But back to Aaron ~ I'm guessing he'll persuade Cyndie, Beatrice & co to fight the men who killed their men (even though we now know it was Simon who orchestrated that particular massacre, but it's all the same gang, right?). 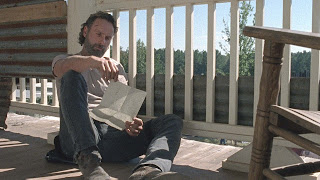 Something I liked about this penultimate episode is the way we were reminded about Rick's normality, in Carl's letter, the contents of which were finally revealed ~ and didn't they bring a tear to your eye?  The memories of his pre-Walker childhood and his hopes that Rick will take Judith on those walks, too, then seeing her with Michonne; made me almost miss Lori, too.

So we started the episode seeing Rick's basic persona as the good guy, husband and father, and ended with Negan showing less of the 'humanity' we've seen of late, and more of the psycho within.  When Michonne read Carl's words to him—'Start over ~ you still can'—he only became more determined to kill every one of you; seems he was only keeping them alive because he thought he could get them to work for him.  They were a potential resource, that's all.

No, Negan, Rick didn't make all this happen.  The Saviours would have reached Alexandria eventually, whatever happened, and 'killed one of them, right off the bat', to demonstrate their authority, and probably more, too.   It wasn't the first shoot-out at the outpost that started it all; it was Daryl, Sasha and Abraham coming up against the bikers on the road, when Daryl had to kill them to save Sasha and Abraham.


'What a bunch of assholes'

...and you can watch Negan killing Dr Carson II again, if you like!


So what are our hopes for some kind of happy ending at the end of the season finale next week?  I'm really, really hoping it's not going to be Season 6 all over again, with everything going tits up.  Possibilities:
Or maybe Carl's letter will do some good, after all....remember his fantasy future, in which Negan was working in the garden? 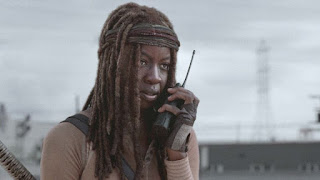 Incidentally, I think it's time Daryl and Rosita got it together.  He's drop dead gorgeous and the numero uno new world warrior, while Rosita is beautiful, smart and totally fab.  There aren't many women worthy of Daryl, but Rosita is. 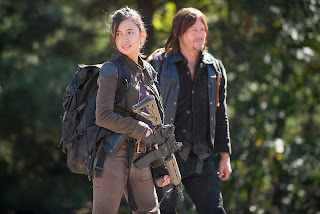 Can't wait for next week.  I feel nervous already!