Lumps in the throat everywhere, with that very first scene of Rick and little Carl, many years ago .... I've been so looking forward to this episode, and it was worth the wait. 😃 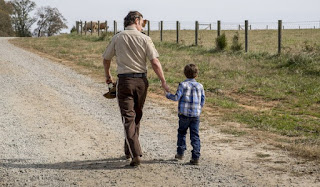 A round of applause for everyone who sussed out that Eugene was secretly working against Negan (though maybe not from the start; I think he just couldn't see all his old friends killed, in the end) - I admit to not being among that number at first, but of course Gabriel's unintentional dodgy bullet had to be there for a reason.  As for the Last Battle ~ Negan's whistle never fails to be terrifying, especially when you can't see where it's coming from, and the sight of the Saviours appearing over the hill reminded me of Vikings, Braveheart, all those battle scenes in which the enemy appears over a hill in far greater numbers than expected ~ but as soon as the camera panned to Eugene's face I thought, ah yes, yes, he's done the bullet thing! 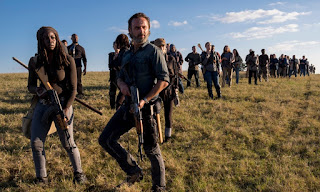 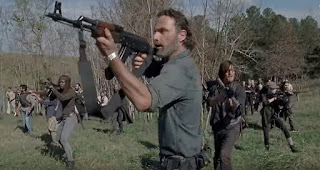 I couldn't imagine how Negan's end was going to come, but Morgan talking earlier on about Rick going back on his word should have been a clue... Rick lulled Negan into a false sense of security, pressing his buttons by talking about Carl, and then... slash!!!  And at last we saw what really happened under the swinging stained glass, and what he meant by 'my mercy prevails over my wrath'. 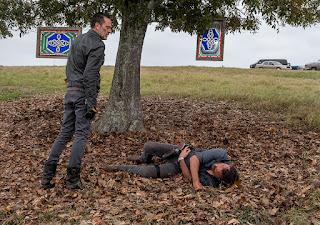 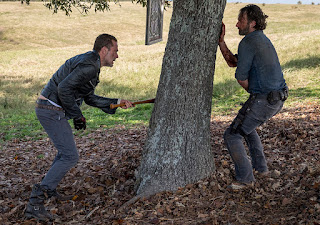 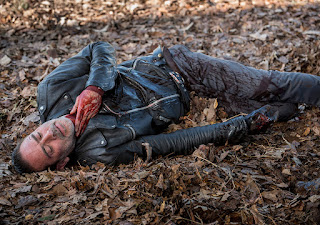 Negan should have done his research before he came out; Rick did similar when killed Shane in S2:12 Better Angels.  Just like he stood in front of Negan, looking as though he was going to collapse/cry/beg, he let Shane think he was weak, and pretended he wanted them both to back off.  (The scene below is so worth watching again, by the way!)


So we finally had the promised wrap-up of many storylines, but this is The Walking Dead ~ there can be no happy ending without a sinister threat lurking down the road, and this time Rick might need to watch out for his own family.  Will Maggie really turn against him? If so, I'm totally on Team Richonne.  The proposed fate for Negan, ie, sitting in a cell for the rest of his life, watching the rebuilding of Rick's new Utopia, is a far more suitable punishment than a quick death.

...but is Maggie right?  This is Negan we're talking about, not any old prisoner; he's streets ahead of most in cunning, intelligence and manipulation, and I can imagine him persuading someone to let him out, sometime.  He may pretend to have changed ... pondering on this made me think of Crighton Dallas Wilton in S6:4 Here's Not Here; I still think Negan is a complete psychopath who will say and do anything to get what he wants, and wonder if Maggie, like Morgan's cheesemaker chum Eastman, will be the only person to see through him. 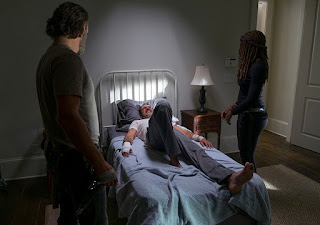 Either way, I hope the writers don't overplay this.  Daryl going along with Maggie I can understand, as he hasn't been his lovely self since he (thinks he) caused the death of Glenn (and feels he owes Maggie), but I don't quite get the inclusion of Jesus in the secretly mutinous trio.  Isn't Jesus the peacemaker?  That evil nod he gave as she outlined her plans was a new expression for him.  Although I've never cared much for Maggie, it's totally feasible that she feels the way she does ~ hell, millions of us want to avenge the death of Glenn! ~ but it's going to have to be subtly done to work.  Don't want any sudden changes of character, with previously decent people taking on Negan/Governor-like qualities.


But back to the finale ~ looks like Siddiq has been accepted into the fold now, and Rick probably sees that in honouring his new pal's mom, Carl was also honouring Lori, but... nah.  Still doesn't seem right without Rick looking for Coooorrrrl all the time....


I'm super pleased that Dwight got away, and hope he will carry on into future series, and assume Jadis-Anne will become a fully paid-up member of the gang.  You never know, maybe we will, one day, get to see the super-mega-zombie masher in action again.....

.... and talking of useful bits of kit, I suspected that an escape would be made from Hilltop via Sasha's log store tunnel, and that Oceanside would show up in the nick of time, so no surprises there.  Also predictable (but not in a bad way) was that Morgan would need to go off on his own, now to be seen in Fear The Walking Dead, I've since discovered!  So I might have to start watching that; I wasn't that impressed by Season 1 but have been told it gets better. 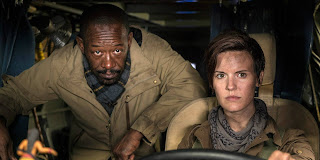 I hope our people are not all going to split up too much ~ looks like Carol's staying at the Kingdom (cue cosying up with Ezekiel?), Richonne and Gabriel appear to be at Alexandria, but I hope Tara, Eduardo and Rosita were only dropping off the glass and don't stay too long at the Sanctuary ~ which is in good hands, now that Tanya and Frankie have exchanged Negan-Wife LBDs for Hilltop Chic.


'Never mind the poison pills, can you make us some workshirts and jeans?' 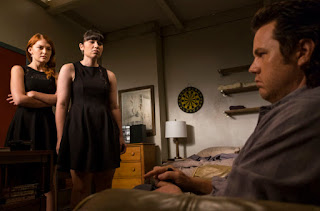 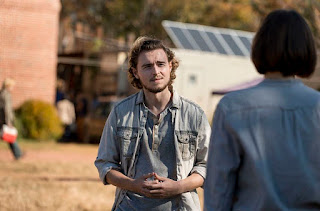 My prediction is that Maggie will get together with Alden; such initial overt hostility is usually an indication that clothes will be shed and love will follow.  And she was pretty crappy to Glenn at first, if you remember!


Still feel so sad about Glenn, it's just not right that he's dead; I want this!

I loved Rick's speech at the end, an echo of the one he gave in episode 1 of the season, and the reminder that the real enemy is that massive herd down the hill ~ or, for Rick, is it going to be nearer to home?  Now the wait until Season 9 ~ I've read that Heath may be back, which I'm pleased about, and that Maggie may not be around for much longer ~ apparently, S9 will deviate from the comic book story.  Okay.  One more thing: please, writers, now that the wings are back on the right person, can we have the old Daryl back?   Come on, Dixon, Rick's your brother....

ps, saw Jerry in this film Den of Thieves the other night, it's a terrific film!