All of a sudden - nothing happened. My review of #TheHotZone:

An irregular series of telly reviews  :)

Well, now.  This seemed right up my street, and I saw lots of tweets describing it as 'terrifying' and 'chilling'.  Having watched it, thought, I'm a little bemused.  The atmosphere of suspense is manufactured well, with scary music, well-shot angles, and foreshadowing that gives the impression that the grim reaper is poised outside the door...but—do you remember that Monty Python sketch about a non-thrilling thriller; '...when, all of sudden...nothing happened'?  That's what this was like.

Factually, it's fascinating, if you're interested in how viruses spread and are prevented from doing so, but as a TV drama?  Not so much.

The story centres round a lab in which deadly diseases are analysed, mostly by Julianna Marguilies and the token sceptic (Topher Grace in a bad wig); ebola is detected in monkeys used for animal testing, nearby.  It's set in 1989 and 'based on true events', which did make me think 'hmm', as it's about a potential outbreak of ebola in Washington DC, and, as far as I know, there hasn't been one.  It was saved from 'abandon during episode 2' by good presentation and terrific actors such as Noah Emmerich and Liam Cunningham, but was basically six episodes with few events and a hell of a lot of padding. 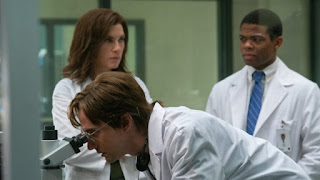 Although this unusual strain of the virus did accidentally spread to a couple of humans, all it did was make them feel a little peaky.  There was a cliffhanger at the end of episode 5, when—da-da-daaaah!!—Emmerich collapsed, but it turned out he was just a bit tired.

At one point Emmerich's gang in hazmat suits were trying to put down all the infected monkeys, and one of them escaped.  Nail biting time?  Nah.  Five minutes of panic and chasing it about later, they caught it and everything was fine and dandy again.

As they were travelling to get this job done, in the eerie dawn light, there was a scene which epitomised the whole show.  A man in a dressing gown went out to get his newspaper in, and saw the three white vans go past.  For some reason, he stood back with a look of shock and terror on his face; maybe he had a particular phobia about white vans.  That, or he heard the scary background music and thought 'I bet those three white vans contain guys in hazmat suits trying to stop a deadly virus sweeping, unchecked, through the population of the US'. 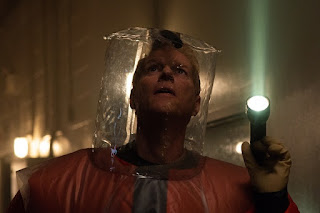 There were some great scenes in Zaire in 1976 when Liam Cunningham and James D'Arcy were on the prowl for the next 'monster' (deadly virus), and, yes, the info about how viruses spread and mutate certainly held my interest; these are the elements, along with the acting, that earned the 3 stars.  Yes, it served as a warning to us all, but I can't imagine who thought it would stretch to a six part series.  Two episodes would have been enough, just to put the point across about viruses, generally.  Or possibly just a film.

If you're interested in the subject matter, you will love a documentary film called Unseen Enemy, trailer here: