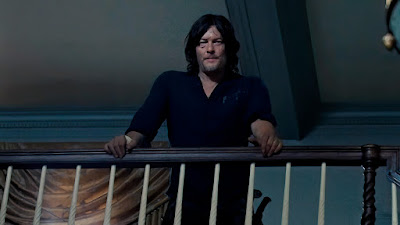 
'Those skin freaks would love it if we just rolled over.
Screw that, and screw them'
~ Rosita 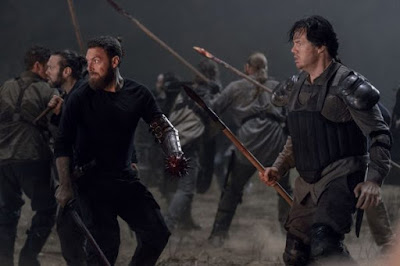 Wow.  Just wow.  S10b gets better and better—this episode gripped me from start to finish once more, the dialogue was superb, and the last 5-10 minutes has surely to be the most terrifying Walker assault of all time, even more so than S6x08 Start to Finish or S2x13 Beside the Dying Fire. 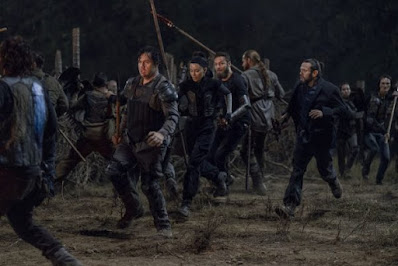 It was reminiscent of a medieval battle, with its lethal catapults (presumably filled with what was being collected from the trees!), spears, spiked clubs, shields—and after Kelly felt the vibrations on the ground so they knew the danger was upon them, you could feel their fear, just as men must have felt in those days: that whether or not they survived was in the lap of the gods.  I won't talk about the rats... 😱 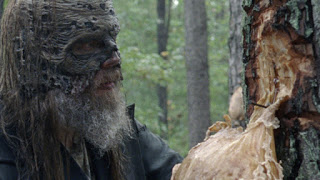 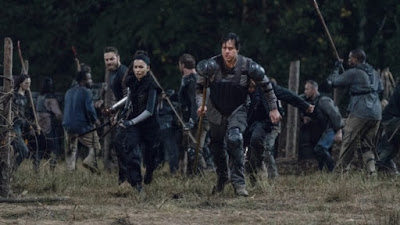 We know most of them will survive this round, at least, because the 'next week on The Walking Dead' at the end shows them all haring around in the countryside (and Alpha berating Negan because she has not achieved what she set out to 💃 🙌).  Although I know Ezekiel will not die yet (re: a picture from future episode that I posted at the end of last week), I feel he has not long to go, given his health, his last encounter with Carol, that enormously touching scene with Daryl, and the fact that he gave Henry's armour to Lydia.  Getting himself right with everyone, and all that.  Remember all that lovely Siddiq stuff just before he met his end? 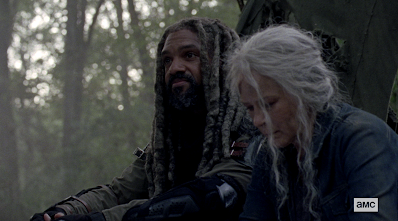 'You've changed.  Lost your sense of humour'
'No I haven't.  I left it on a dresser in the Kingdom, and then it burnt down'

And so the two of them came together again, a brief interlude of happiness and being there for each other when they were both at their lowest ebb.  Although we know that she didn't love him like he loves her, they nevertheless had six or seven happy years together.  Whether or not Carol was still just trying to escape the loss of Sophia and all the other bad stuff that had gone down, it worked, because he gave her what she needed: someone to love and care for her, unconditionally, a home and family.  Later she told Lydia, 'I had a life', but I believe what she meant by that was simply that she was that she was a mother; when she lost that part of her identity, all over again, the rest just crumbled away.  She may have loved what marriage to Ezekiel stood for rather than the man himself, but it made her happy for a long time—especially when, after Rick disappeared, Daryl just took himself off.

I wondered what she was thinking when she looked at the portrait of Glenn**, and then when Daryl stood at the graves—but at least he has forgiven her; seeing his anger and how she despaired over it was so heartrending.   'Please don't hate me'.  'I'm never going to hate you.'

** Later: now I think she was probably apologising to him for working with the man who killed him!  But for a good cause.... 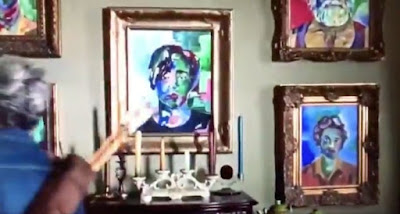 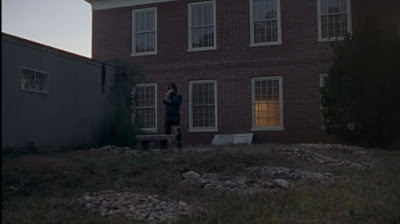 She's made a sort of peace with Lydia, too; I liked how Lydia sees her, absolutely.  'You seem to hate yourself so much ... sorry your kid died and you hate the world'. 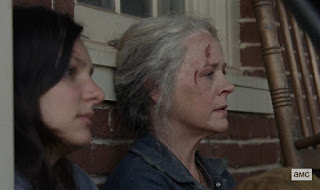 Earlier... when those at Hilltop were arguing over when to fight or run, it so reminded me of S3, when the Governor was on the warpath, and the question was the same: run, or stay to fight.  And Lydia played Merle's part—she knows the enemy, as Merle did, and told them the reality of the situation, how bad it would actually be.  Running was not an option; they have so much more to lose, now: crops, windmills, forges, proper homes—and no cars to make a quick getaway. 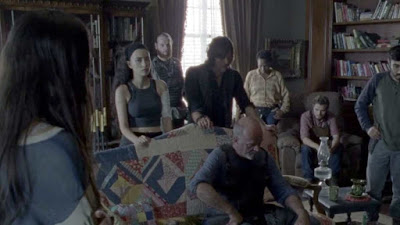 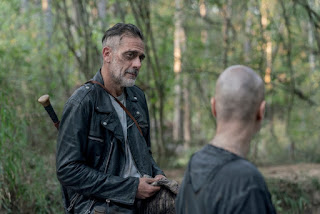 I imagine Negan, who has 'graduated to the next level of kinky Whisperer shit' 😂 must have been behind the road blocks and the murders at the look-outs; that had 'Saviors' written all over it ...but, like before, he didn't want to kill them, just make them bend the knee.  Surrender, not annihilation.  Is his plan to take back what he once had?  Get Alexandria, Hilltop and Oceanside to submit, become the new Alpha, and reign once more?  Or is he doing a Eugene, playing the long game to help our people, in the end?

Talking of Eugene, I loved all his scenes this week.  I didn't seriously think the kiss was going to be a kiss (not after being fooled with the Michonne and Ezekiel pictures!).  Off he goes in a week's time to his 'celestially ordained meet and greet'; and it was lovely that he described Rosita as his 'BFF'—haven't we all been there, nearly kissing a platonic friend who we think we have 'those' feelings for, but then realising we don't?  In this post-apocalyptic version of an online relationship with Stephanie, he seems to have become more of a regular guy, 'loser with a forlorn heart' though he may be! 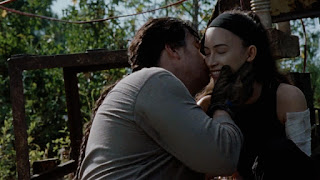 As for Earl and Alden, characters with so much potential yet to be realised ... although I believe Lydia and Mary are completely against Alpha now, I can totally get where those two are coming from.  Nobody could expect them to welcome people who might have contributed to the capture and murder of Tammy Rose and Enid.  You may disagree, I don't know.  It's sad to see Alden become the angry fighter, full of fury, that he never became with the Saviors; remember when he was just the calm, gentle handyman? 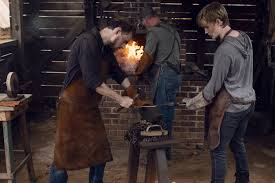 'If I die tonight, it will be for everything we've been trying to build, for him' (Adam). 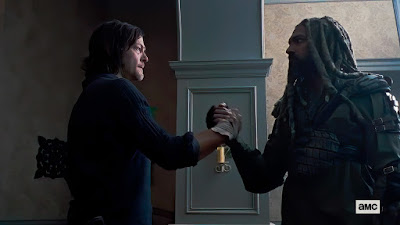 If Ezekiel and Daryl's conversation was the biggest tear-jerking of the week, the happiest has to be Judith replacing Daryl's wing.  I've never seen him smile so much!  It feels like a good omen, doesn't it?  Rick is with them in spirit....

And finally ... any one notice how, when Daryl walked away from talking to Lydia and they were getting ready for the fight, the music was a version of that lovely uplifting tune when Rick and co walked up to Barrington House, when they'd decided to fight back against the Saviors, in S7x08 Hearts Still Beating.


I wonder if Sasha's tunnel is still under the fake log store at the Hilltop?  Might be useful, if it is.... 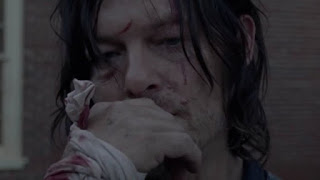 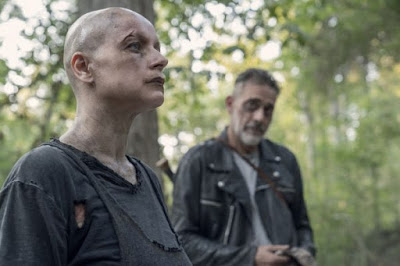 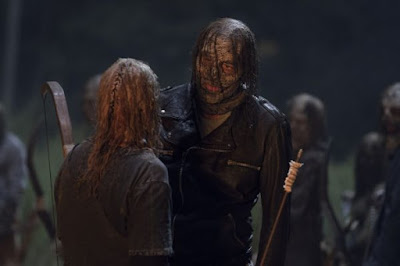