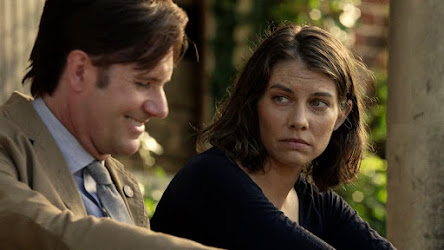 An epic episode in which as much was conveyed by words unsaid and masterful foreshadowing as it was by action and dialogue.  Huge round of applause to all involved ... it's left us with so much to think about. 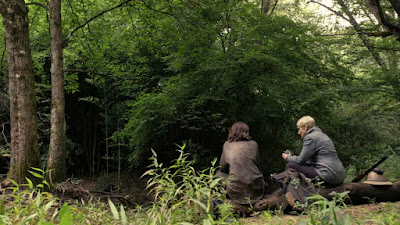 First, to the main story, at Hilltop: after watching this, I am one hundred per cent Team Maggie.  Despite finding her too stroppy and self-important over the last few seasons (though it was understandable that Hershel Greene's daughter died and was born again as a different version of herself after she lost Glenn), right now I think she's doing absolutely the right thing.  Loss and heartbreak can bring out strength and resilience, and it seems this is what has happened with Maggie.  Despite the hardships she and her friends will continue to experience, her intuition tells her she's made the right decision for her and Hershel Jnr, and anyone who wants to stay with her - and for the future of Hilltop. 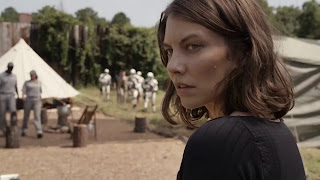 That was a great little sequence at the end, as the Milton contingent were leaving - Maggie saw Daryl fall into line like a good soldier, heard Mercer tell him to remember that they're always watching.  This consolidated in her mind what she'd been thinking since Lance unwittingly echoed Gregory by suggesting that she was 'in over her head' - as she said, he doesn't know her very well.  You don't tell Maggie Rhee that she can't do something.  Hershel Snr would be proud of her.

It was surprisingly good to see how she and Pamela Milton related so well (more echoes of Deanna, and Georgie), though Pamela's view of 'restoring the natural order' was revealed to be at odds with Maggie's.  Maggie said that Pamela's idea sounded like an autocracy, which of course it is; Pamela idea all the small communities should come under one umbrella means they would then have to be governed by someone, or a series of someones.  The opposite of Maggie's aim: fair, equal, communities free to live life as they wish, trading where and with whom they want to. 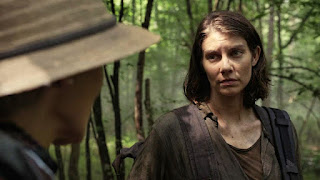 What with Lance's grandiose suggestions of universities and concerts, her face said that she wasn't sure she wants a return to pre-Fall days for Hershel, anyway. 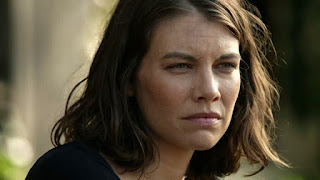 This was reiterated when Mercer commented how hard it must be for kids at Hilltop, and Daryl pointed out that Hershel is a different kind of kid, who grew up on the road; Mercer was thinking of himself as a child, and what he would be missing, not the children who have only known the world since it changed. 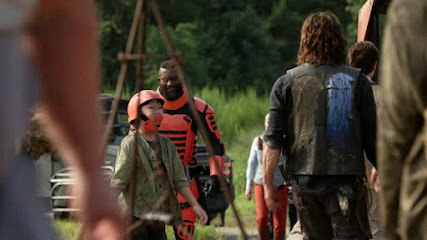 Then there was Rosita saying to Eugene that she missed going outside the walls and the freedom they used to have, even though she thinks being at the Commonwealth is the right thing 'for now'.  Our people seem to share the same belief: that it is only temporary, and when the time is right to return home, they will be able to do so without encountering resistance.  Is it only Maggie who can see the worst case scenario? 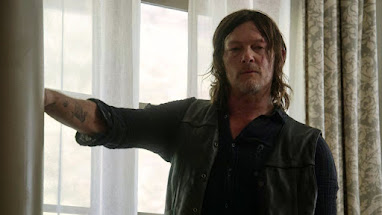 As for Daryl: falling in with rules and regulations is so opposed to his innate personality that he can only be doing so for the sake of others, particularly Judith and RJ.  Like Rosita and Carol, he appears to be walking the quiet middle ground and biding his time, despite any reservations.

Maggie: 'Why do you trust these people?' 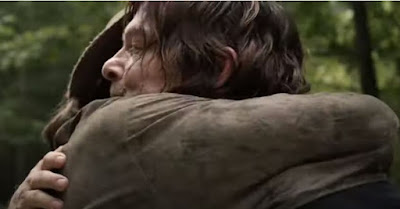 But ... do not forget that 'six months later' scene at the end of 11x09 No Other Way.  I had to check it out again after seeing this episode - if you watch it again (below, only 39 seconds long) you'll see that it's quite worrying, given what we now know!

On a lighter note, I like how Daryl has become something verging on matey with Mercer; Daryl seems more open and vocal now, like he was in the early seasons before he started communicating in grunts.  I'm waiting for Mr Pumpkin-Coloured Space Suit to reveal more, as he does every episode, little by little... 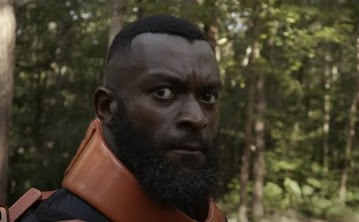 (btw, when Mercer asked Daryl what he did before all this, I so wanted to hear him say what he said to Beth back in 4x12 Still: 'I was no one.  Nothing.  Just a redneck asshole with an even bigger asshole for a brother'! 😄 ) 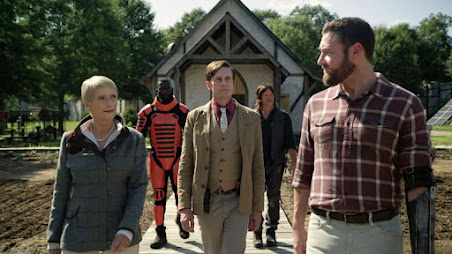 And so to Alexandria:  What was Aaron getting people to hide, when the Milton-Hornsby crew first showed up?  Telling one guy to put a plant in front of a particular window?  Maybe he's scared that it will end up like the Saviors, with them having to give half of what they produce, in return for the help.  Or maybe it's weapons.  Hmmm...

Best case scenario, they've got it all worked out.  Daryl, Carol, Aaron, Rosita, Gabriel - they've put contingency plans in place.  This seems possible, as we never saw the actual exodus to the Commonwealth, how it took place and what happened when Daryl and co left.  Is Aaron just playing the game, to get what they want? 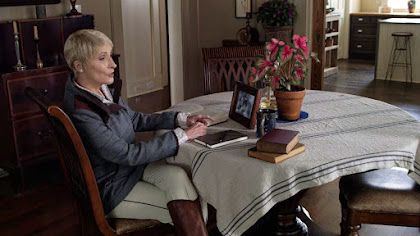 Was nice to see that photo of Deanna and Reg in Deanna's old sitting room, which still looked just the same.  And that Pamela knew her.  I wonder what Deanna would think if she could see them all now. 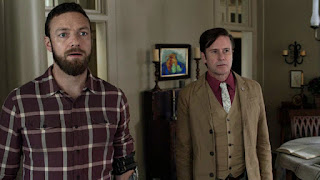 It's notable how Lance told Aaron that, as far as help for the communities was concerned, it was 'all or nothing' (which was, I believe, the original title of the episode), but this didn't seem to be the case when he talked to Pamela.  I can't see Aaron allowing that little 'worm' to retain the upper hand for long, though.  He stopped being the open, trusting Aaron of Season 5 a long time ago.

As for the curious partnership of Milton and Hornsby - on the face of it, Pamela seemed refreshingly above board at the beginning of the episode.  She said that the former Alexandrians will be free to return to their communities when they want to; when Lance said that the three communities were perfect for what they're envisioning, she replied, 'What you're envisioning', implying that it was his show and she was just an observer.  In contrast, Lance's power-crazed eyes were doing overtime this episode, never mind the little Walker shooting display at the end and his avowal to rule the world bring more and more people in. 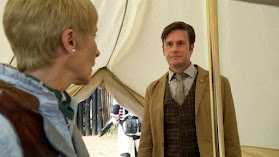 Later, though, when they were packing up to leave, their conversation was a mass of complicated undercurrents: she said 'You've been ambitious our whole lives' - what 'whole lives'?  Are they related?  And when she suggested that his desire to rule over Alexandria, Hilltop and Oceanside meant that his work at Commonwealth might suffer, she threatened 'consequences'.  Does she have a hold over him that we don't know about? 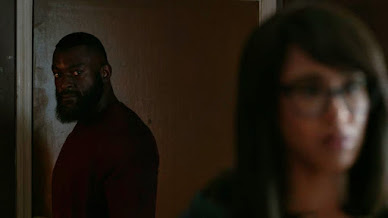 Talking of hidden complications, Mercer and Max's flashback scene showed that he was only angry with her about the radio thing because he feared for their safety.  He remarked that contacting a 'rogue' community was 'dangerous for everyone, especially for me and you'.  Why?  Is it just because Milton and Hornsby are scared of takeover by outsiders, or is there something else afoot?  His use of the word 'rogue' doesn't exactly imply a live-and-let-live attitude towards other communities, generally. 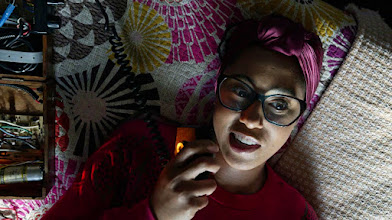 I'm so pleased that Max and Eugene have finally got it together, after a shaky start, and she seems lovely.  Interesting to be on her side of the conversation that we heard in Season 10, and see how she's just like him, in her interests.  If ever there was a couple you want to make it, it's these two. 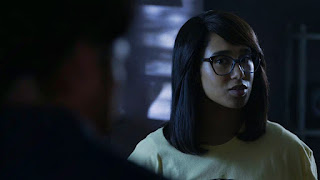 And finally...Ezekiel and Carol. I was amused by how he sussed out straight away that she had been 'up to something' in order to get his surgery pushed up the list.  Because we weren't around for most of those six years during the time jump, it's easy to forget how close they were for a long, long time, and, thus, how well he knows her. 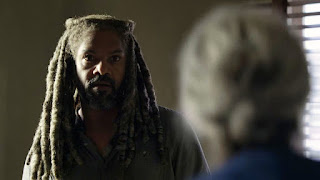 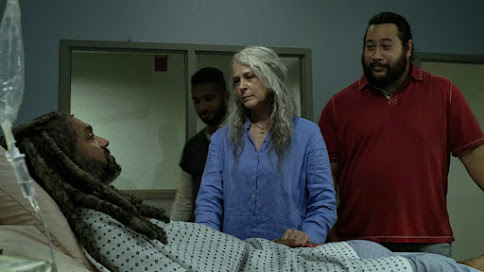 A few other things I'm wondering about: 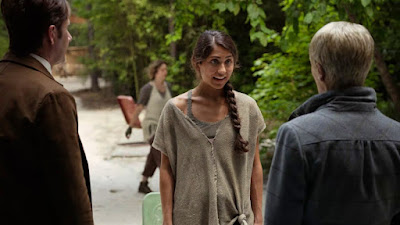 A couple of other bits and pieces: 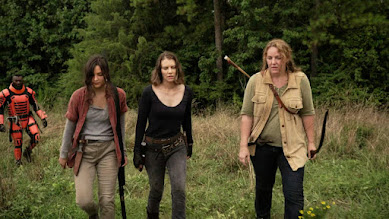 It's all getting better and better, isn't it?