FULL CIRCLE is the sequel to my fourth novel, DREAM ON, but can also be read as a stand alone.   If you'd like to read about love triangles, infidelity, the lure of celebrity, the destructive nature of alcohol addiction, with a bit of rock music thrown in, then I think you may enjoy it ~ oh, and it's quite funny in parts, too - well, my husband and sister have both read it and laughed out loud at some bits, anyway!

The cover (give or take some changes that may be made) 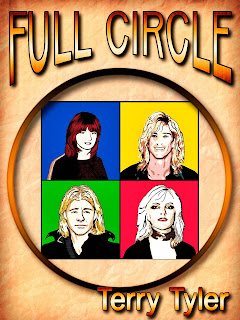 Here's an early draft of the Amazon blurb:

FULL CIRCLE is the sequel to Terry Tyler’s fourth novel, DREAM ON, but can be enjoyed as a stand alone.  It’s a tale of love triangles, infidelity, an English rock band, the lure of celebrity, and the destructive nature of alcohol addiction.  FULL CIRCLE ~ love, sex and marriage, rock music and secret affairs, with a few laughs along the way!


Two years have passed since we left Dave, Ariel, Janice and Shane at the end of DREAM ON.


ARIEL thought her hard work and perseverance had been rewarded when she met record producer Theo Perlmutter ~ then a tragic event turned her dreams to dust.


Newly married JANICE was happier than she’d ever been ~ but the honeymoon ended when born again alcoholic husband Max careered off the wagon and into the nearest bar.


Being dragged onto The Jeremy Kyle Show in DREAM ON was not enough to make ladies' man SHANE learn his lesson – will his philandering ways eventually catch up with him?


Rock band THOR has risen from the ashes…


… but DAVE is unhappy, trapped in a domestic situation not of his choosing.


Will there be a happy ever after ending for any of them?

I'm hoping it will be out by the middle of April - until then, my fingers are staying crossed!
Posted by Terry Tyler at 07:24

Email ThisBlogThis!Share to TwitterShare to FacebookShare to Pinterest
Labels: my books