Plague Inc. ~ Bacteria ~ Mega Brutal: My strategy for the destruction of humankind :)

I'm loving playing Plague Inc. by Ndemic Creations (on my tablet) ~ I progressed to Mega Brutal last weekend and wrapped all seven  main ones up in a few days (suffering arm and wrist ache, it has to be said...).  I found Fungus the hardest, so it's my favourite.  I'm not a huge fan of computer games, but this one is brilliant. 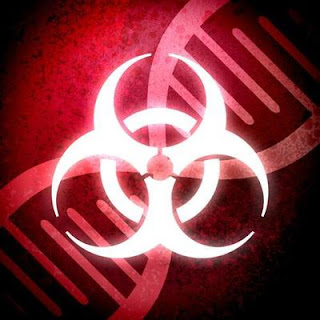 For anyone who is struggling with it, here's how I destroyed the world with Bacteria on Mega Brutal.  There are probably tons of other ways of doing it, but this is the way I got there: 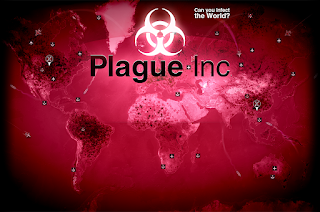 I've found the best place to start Bacteria is Egypt, though India is not bad.
If you have the option (which presumably you have, if you've got to this stage), modify with the following:


Obviously there's no guarantee that you'll win it first time with this - it depends on the order the countries get hit, for one thing, and you might want to modify it slightly, but this is the sequence by which I've extinguished humanity a couple of times :)
First, you need to protect your plague from run of the mill anti-biotics, so as soon as you have 11 DNA points, activate Drug Resistance (DR) 1.  Next, get it spread around.  You've already given sea travel a boost with Aquacyte, so go for Air 1.  As this might take your plague into rich countries with better developed medical facilities like the USA, the UK, Spain or Australia, the next thing you need is DR 2.  This will take 25 points, but be patient, don't be tempted to use them for something else.


Around now, your plague might evolve a random symptom.  Devolve it immediately, because any symptoms will alert people to the plague's existence, and the cure will begin earlier.  Throughout the game, devolve any symptoms that don't help along your chosen path, as you can get refunded points.

Your next priorities should be:


Why? If your plague is travelling to colder countries, it needs to be hardened to the environment.  You also need to get it travelling around countries without airports.  Around this time, though, you will get the message that the plague is 'More infectious than TB', followed by 'More infectious than HIV'.  These signal that, any time now, it's going to be discovered.  You need your 7 points for GH 1 immediately it is discovered.  The order in which you activate the three above features may vary, depending on the game's progress, but getting GH1 as soon as work starts on the cure is all important.


Now it's a race against time!


Get GH2 as early as possible; these two really do slow down the cure, giving you more leeway.  This is important!  Next, you will need:


While you're getting these, the cure will be progressing, and you'll be tempted to get some Genetic Reshuffles (GReshuf).  It's best to leave these until the cure is at least 50% ready, as they are more effective then.  If you use them early, the cure progress only goes down a few per cent, but if you use them later it can be as much as 10 or 12 per cent.


You need CR2 in order for the plague to infect and carry on infecting in Greenland and Scandinavia, and it doesn't hurt Russia and Canada, either.  Air 2 gives it all a real boost, but you usually need Water 2 for the Phillipines, the Carribean and Greenland, though I have got them without on occasion.


The final Air and Water one, Extreme Bioaerosol, is tempting but should not be necessary - and it costs 23 points you will need elsewhere.


When about half the world is infected, you need to introduce the symptoms.  I find that Coughing and Pneumonia are the most effective for infection, and also they lead to Pulmonary Fibrosis and then to Total Organ Failure - and I believe Total Organ Failure to be essential for winning any of the games on Mega-Brutal.

While you're getting the five essentials above, you will, of course, need to curtail the cure with GReshuf 1.  Use your skill and judgement to decide on the order!  The points should be going crazy by now, and you'll be popping blue bubbles all over the place, too.


If, during this time, your plague evolves any random symptoms, devolve them if it means getting a DNA point refunded.  If it doesn't, don't bother.  If it's one of those on the path towards Total Organ Failure, that's a bonus - but if it gives you TOF itself, you'll probably lose the game as it will kill everyone off too soon, before the whole world is infected.


You know you've got a good chance of winning if your cure is under 50% and you have around 100 points when the last human on earth is infected.  Immediately this happens, go to Transmissions and devolve Air 2 and then Air 1, or Water 2 and Water 1.  This will give you 3 more points.  Then go to Abilities and devolve CR2 and then CR1 - 3 more points.


You now have your maximum points - but the cure may be getting dangerously high now. If it's over 75%, activate GReshuf 2.


Before you do anything else, get Pulmonary Fibrosis and Total Organ Failure.  As soon as you get TOF, the deaths will start piling up, and the points will roll over non-stop.  You may have to get GReshuf 3 or increase the deaths first.  It's likely that the cure will reach over 90%.   If you haven't got enough points to get GReshuf 4 (it's unlikely you will have enough, to be honest), go to Symptoms and get Coma and Paralysis - these will take the cure progress back from that dangerous 97%, to under 90 - and by the time it gets back over 90, so many of the countries will be in total anarchy that cure research will have ground to a virtual halt, and you'll be able to watch humanity get destroyed at your leisure.


If you're like me, you might like to add a few more symptoms just for the hell of it, points allowing - I'm rather fond of Seizures and Insanity.


Don't be swayed by the 'festival of kissing' notification - I reckon it's just there to get you to waste points!  Don't get panicky over the ones about air filters and water filters on planes and ships - they can be dealt with when you're ready.


You don't need any cows or birds or rats, or anything else, if you do it this way.


Always devolve symptoms before the plague is noticed.


Don't be tempted to add a lot of things like sneezing to make it more infectious.


Ignore the Bacterial Resilience - it's not as effective as Air, Water and CR.

For more info about the game, click on the Ndemic Creations link at the top - he's on Twitter, too: @NdemicCreations
It's available on Android, iOS, Xbox One, PC
(I have not been paid to promote this game and have no connection with the makers of it, by the way - it's just a great game.)