So many reflections of the past ~ Review #TheWalkingDead S8:14 STILL GOTTA MEAN SOMETHING

Last week: Review Do Not Send Us Astray

Well, I hope no one failed to notice that Carol found the missing Henry in a place almost identical to Sophia's final hideaway.... if not, you should go back and watch S2:1 What Lies Ahead immediately!

The 'tears in my eyes' award goes to Rick telling Michonne he loved her, and vice versa; it's not something you often hear on TWD.  One of the things I totally rate about the show is that romantic shenanigans do not feature highly; this means that on the rare occasions we see a bit of love stuff, it has such an impact.  I'm such a Richonne fan, and yes, losing André affected her in the same way as Carl's death has him: she just fought through it.  Oh, and writers, we want to know what was in Carl's letter ~ I thought we were going to hear it, read out in his voice!  Or maybe that's for the finale. 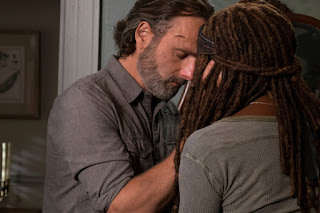 So many reminders of the lost children this week ... when Rick asked Morgan why he saved him in S1:1 Days Gone Bye, I knew it was going to be all about Duane...  there's something about Morgan's 'I don't die' stance that makes me think that when the end comes (and I hope it won't be for many more seasons), he and Rick will still be together, as they were at the beginning. 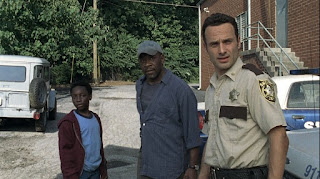 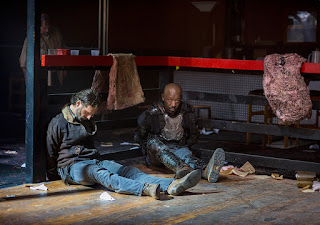 I think this season is getting better and better.  I am not one of those 'waving the banner for women' people, in particular, but a theme I noticed in this episode was conversations in which the women were emotional but still practical, while the men were just emotional: when Carol talked to both Morgan and Ezekiel, when Michonne talked to Rick, when Tara talked to Daryl....the guys were off on their personal missions (or just skulking around at Hilltop, in Ezekiel's case), while Maggie, Rosita and Diane were in the office talking about bullets. 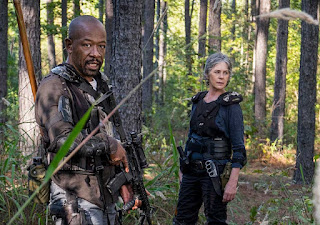 So many reflections of the past and so much to think about in this episode ~ the helicopter!  Ideas, anyone?  As for the Jadis and Negan scenario, yes, yes yes, it's all very sad that his wife was called Lucille, but let us not forget that her namesake is a weapon used to beat in the skulls of total angels like Glenn.  Sorry, Negan, I'm not moved, however hunky you are!  btw, I did like Jadis's unexpected super-clean hideaway, complete with pull-along suitcase. 😉 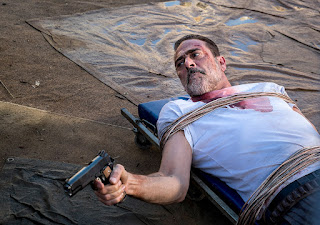 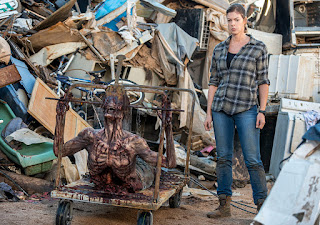 ...and good old Alden for telling Rick where to find the escaped Saviours... loved it when Rick repeated the 'there's not a lot that means much these days, but a man's word has gotta mean something' speech that he gave the guy in the yellow trousers before Daryl shot him in S8:3 Monsters, but this time didn't intend to keep to it, either: 'I lied'. 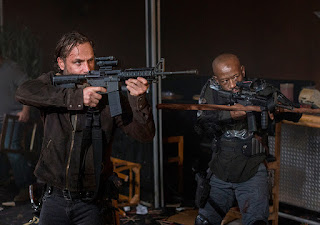 Maybe he lied this time because he doesn't feel there is much to fight for now....  I'm sure Michonne will talk some sense into him. 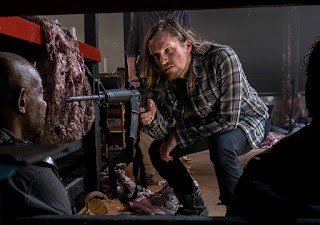 Didn't you love the look on Morgan's face when Evil Jared was chewed up by Walkers, following the shutting of the handy concertina-type sliding door?  One more down, just Simon and Negan to go.... 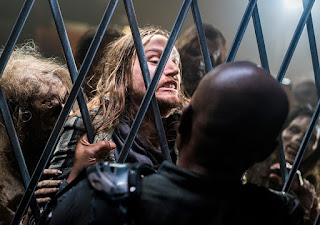 Meanwhile, back at the Sanctuary, the smiling snake Eugene comes out to collect his bullet making materials.  Rosita, you should have shot him, right there. 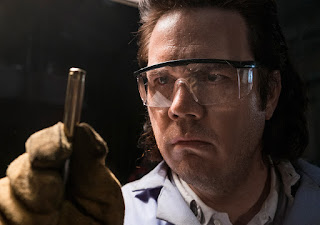 And finally.... who did Negan pick up on his way back?  I think it was Dwight, having wondered if it was Gregory, then Simon.  Any thoughts?