I love you, Season 9!  Thanks to Corey Reed for writing and Greg Nicotero for directing another excellent episode. 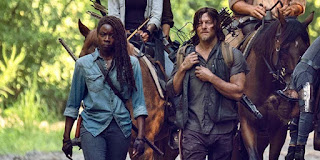 A great recap at the beginning by Michonne, with reminders of Rick, the loss of Jesus, and the new ememy, who walks with the dead... and unbolts gates.

As this season progresses, I like how the old and the new have merged so seamlessly; the first group scene at Hilltop consisted of ex-Saviors DJ and Alden, newbie Luke, new Hilltopper Marco, Enid from Alexandria, and Tara from as far back as the prison ... particularly as I have read that we are to lose Michonne, too, in Season 10.  Yes, too, too sad - I'm still missing Rick, I can't process it yet!


Return to the Sanctuary 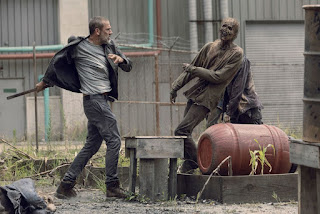 So Negan's out, and the first thing he does is eat a fresh tomato, the source of as many metaphors this season as The Bridge. 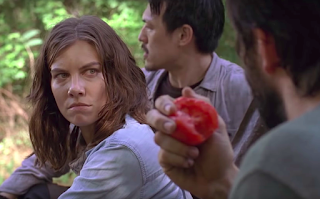 Excellent scenes between him and Judith - who, I would like to say, now looks nothing like Shane and totally like the daughter of Rick and Lori!  Does he see something of her father, and Carl, in her? 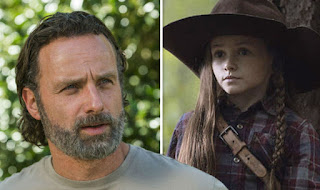 Negan walks on, remembering how empty the world is outside his cell and the Sanctuary.  I always enjoy TWD scenes that show the devastated roads of a forgotten world.  The signs on the shops are especially poignant; these details add so much.  Negan accepts Express Yourself Menswear's invitation to 'Become the man you were meant to be', smiles when he sees the arrow pointing to leather goods... and picks himself up a bit of pipe to swing over his shoulder, Lucille-fashion - all this, just when I was starting to think, hey, perhaps he really has turned over a new leaf; he even looked sad and regretful when he reached the clearing, where it all happened.... or was he just sad that he no longer wields such power? 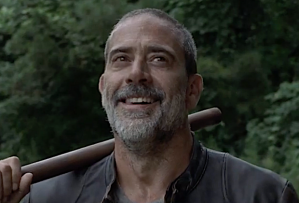 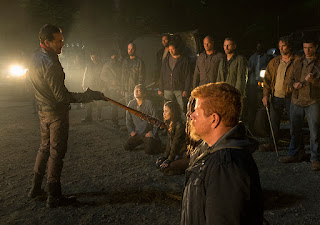 The winner of Best Dialogue goes to Daryl, without a doubt:

Henry: Does alcohol always make you feel this bad?
Daryl: No.  But acting stupid does. 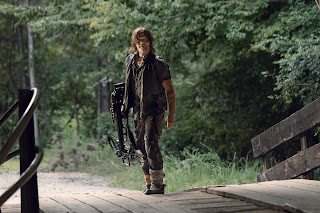 ... and his telling Henry that he should stay in the cell 'as long as it takes to figure it out and wise your ass up'.  Great to see Daryl getting more dialogue, generally.  There's so much wisdom of years, so many memories in that head, and we want to hear it all.  He's been most restrained with Lydia Whisperer so far, though... doesn't matter that she's a girl, Daryl.  Give her the Randall treatment, that'll get it out of her!


Daryl gets the truth out of Randall in S2:11 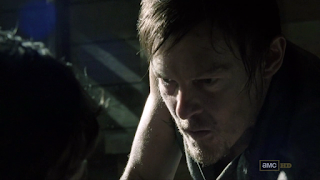 Daryl fails to get the truth out of Lydia in S9:09 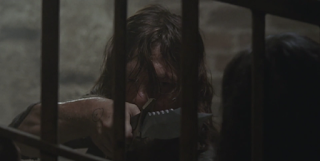 But I daresay daft little Henry will get sucked in by her, and put them all in danger.... 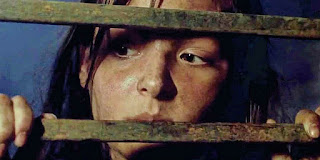 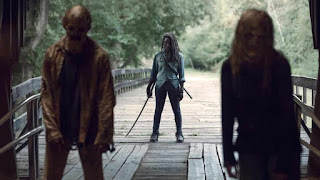 Daryl was definitely the star of the episode, with his arrow-in-the-leg method of working out who was 'the living kind' and who was 'original recipe'!  Loved that whole scene.

Looks like his loner days are over, then, as Michonne persuades him to help Tara run Hilltop.  Glad to see the waistcoat is still in place, and the shirt he's been wearing since he escaped from the Sanctuary, albeit with one sleeve missing.  I've always wondered why everyone wears the same clothes for weeks on end, even when they're on the road and could nip into a shop and get some clean ones, like Negan did! 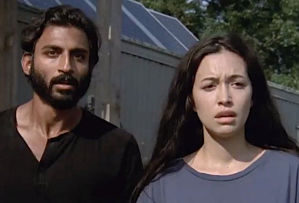 Talking of Alden, sending him out with fellow good guy Luke was always going to be a recipe for disaster, wasn't it? 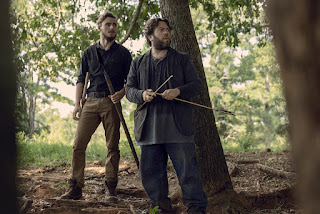 Luke, you should have paid more notice to the whispering of the trees....

...and so we meet Alpha, who is, according to her daughter, just one person on her own, a good woman ... waaaahhh! 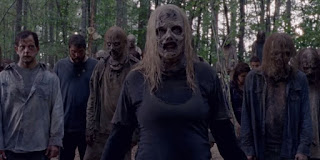