Some photos by Gene Page from AMC site. 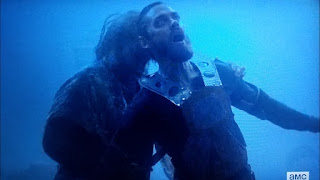 If I'd had any doubts that TWD was totally back on top, this episode would have made squashed Walker brains out of them.  What an ending!

I almost wished I didn't know about the Whisperers, because that bit when the one-we-assume-is-Beta ducked Jesus's sword would have been a mouth dropping open moment.  How do you fight the Walkers, when the Walkers fight back?

And that voice.... you are where you do not belong.... thanks to all concerned for a great mid-season finale!  The dead are centre stage once more, and from Aaron and Jesus's chilling observation that they're behaving differently, to Eugene's theory that it is possible for them to evolve and his (slightly mocked) insistence that he heard them talking, to Daryl's face when his flare and Dog's barking didn't work, the growing sense of unknown menace was spine-tinglingly terrifying. 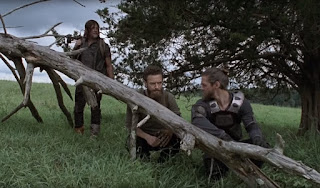 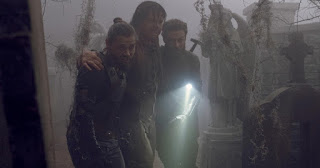 ...especially when Daryl revealed what was underneath.... 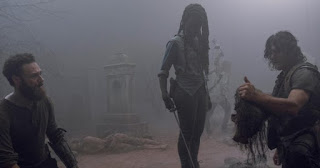 As for the end scene.... déjà vu, anyone?  I've always loved how TWD uses echoes from the past, but at least when our gang were totally surrounded in S6:16 Last Day On Earth they knew what/who they were dealing with.  This time, they couldn't even see the foe; all they could hear was ...circle... keep them together...


(that other aerial shot when they were totally surrounded: 1.00 in)


Looks like Tara's going to be running Hilltop after all, then... I couldn't understand why Jesus went back in to fight, on his own, when he could have just got behind the gate, but... yeah, I can go with it.  It's TWD; I suspend my disbelief. 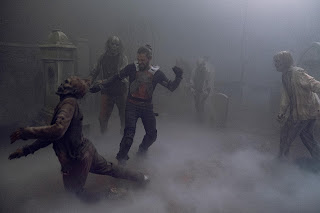 Talking of people who have too great an idea of their own invincibility, I am sure Henry's new mate Gage is soon for the bite.  No new character can be that cocky and live.  The idea that he, Addy and Rodney have lived at Hilltop for over half their lives is interesting; what used to be is gone, irrelevant, as children grow up knowing only the new world. 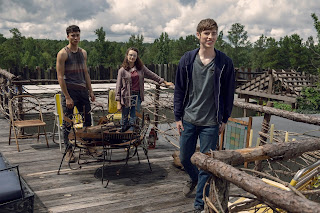 Meanwhile back at Alexandria, the other main event of the day was, of course, Negan's escape.  What's he going to do with his new-found freedom?  Will he join in with the coming war against the Whisperers, or find a kindred spirit in Beta?  Will he persuade former Saviors like DJ and Laura to kneel once more?  After he resisted Gabriel's psychoanalysis, I rather liked 'Gaby's' momentary loss of serenity: 'Bad enough I have to clean up your shit, I shouldn't have to listen to it, too'.

Thanks to Anniek for reminding me, in the comments, that this wasn't the first time Gabriel left the door open; remember the end of S5? 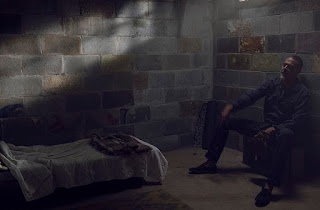 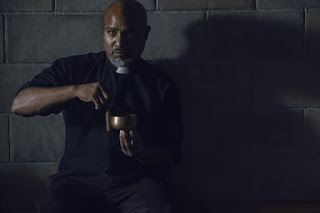 Jesus talked some sense on his last day, about how, as a species, we are natural explorers; made me think of what Daryl said to Aaron, many moons ago, when they were trying to rescue Buttons the horse in S5:13 Forget: 'When they've (his group) been out here a while, they become who they really are'.

I think it's this that holds the key to the enduring popularity of TWD, as much as the suspense, scary stuff and characters we love, because it makes us wonder how we would fare, too. Without technology, commerce, politics and so-called civilisation, some become the creators of homesteads, some defend them, others travel alone and meet traders along the road... 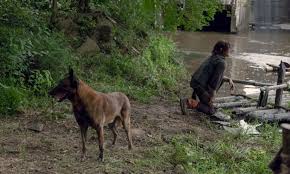 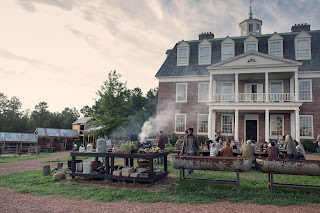 ...and discover sides of themselves that would otherwise remain hidden forever.
Look at Carol. 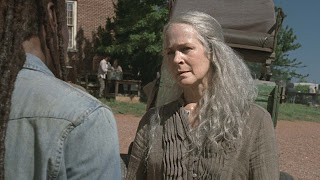 Her meeting with Michonne brought a tear or two to my eye - I'm dying to know what happened to divide the communities.  Gage mentioned 'the war'; it must have been something horrendous, judging by the reception Diane gave Michonne's group, and most of all the look on Tara's face. 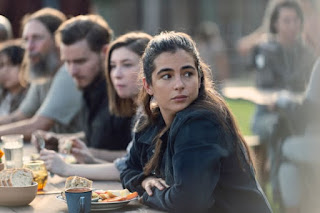 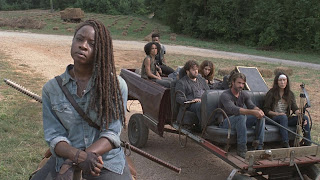 Come on, you've known each other since Terminus, and you walked the weary road to Alexandria together. I  imagine it's why Maggie's gone, but surely any awful thing Michonne did must have been influenced by her grief over losing Rick.

Scott Gimple said the general feel of the world, post time-jump, would be 'medieval Amish', and the way the look-out near Hilltop shouted 'Riders!' and everyone scarpered back behind the gates underlined that; as of old, riders must mean danger, or news, either good or bad.  I notice Alden has done his bit by growing a distinctly Amish-style beard, too.  Love that he's with Enid - everybody say ahhh.  Sorry, Henry, she's way too cool and too old for you. High Five to Earl for telling him that if he can't hack being a grown-up, he can 'take his scrawny ass back to Kingdom.' 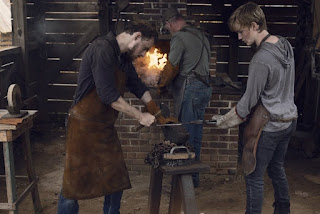 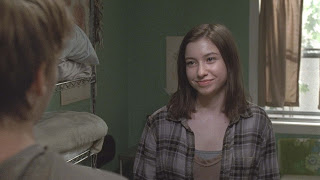 What next?  I am sure this fair that Carol keeps talking about could lead to something very good (as Tara said, albeit a tad sarcastically, it looks like the old gang's back together), but some seriously bad stuff is bound to go down, too.  I can't wait.  Excellent, excellent season.  Now, what do we do until February? 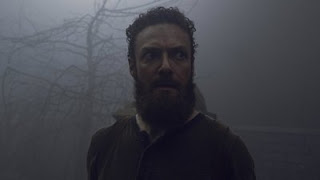 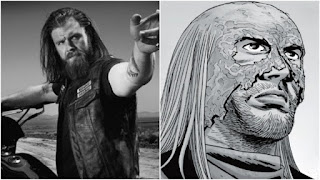 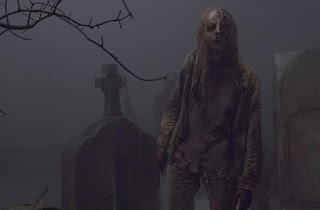