TIPPING POINT is FREE!
May 5th ~ 9th only
Book #1 of my post-apocalyptic series
Click HERE for all Amazon sites 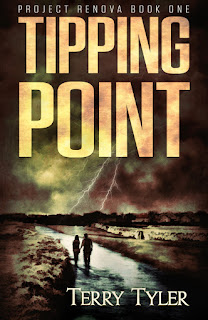 The other day I was talking to a friend about how viruses spread, because he was unsure why, in this current climate, items bought from a local shop should be wiped with a disinfectant, or why it mattered that under some circumstances people aren't bothering about social distancing.
Later, it occurred to me afterwards that I should have just sent him this short excerpt from Tipping Point, about how Nick, my Patient Zero, became 'a one-man fever dispenser' ~ here, in case you would like to read, or pass on to anyone else who doesn't understand!
I must point out that my 'bat fever' (I wrote this in 2017, honest!) is 100% fatal and is airborne (for very short distances and time periods only), but the principle is roughly the same.
😷😷😷

Nick Greenaway would not start to feel ill until the next morning, though the virus was at its most contagious in that first twenty-four hours of infection.  At the gym he enjoyed a full upper body workout, whooping when he exceeded his personal best on the running machine, oblivious to the pathogens released as he puffed and sweated into the air.  The owner of the gym had packed in as many machines as he could; so close together were they that the bare arms on either side of Nick were soon spotted with tiny molecules of his perspiration.  On his left was a doctor who'd received the vaccination several days before; on his right, a hairdresser called Annika had not.

The next day, Annika would board a plane for her annual holiday in the sun with her girlfriends, feeling a little ill but not considering, even for a moment, that a slight summer cold should stop her enjoying her two weeks in Turkey.


The woman who served her airport Costa Coffee would feel a strange shudder of darkness as Annika put money into her hand, but choose to ignore it.  She was to remember that sensation the following Thursday, as she gasped her final breath.


Twenty-eight hours later, when Annika stepped onto the Turkish tarmac, twenty-seven people would be infected on that plane alone.


Back at the gym that Sunday, Nick sat in the steam room after his workout, to relax his muscles and empty his pores of a week's impurities.  He removed the towel from his neck and placed it on the bench before closing his eyes and leaning his head back.  Next to him, an acquaintance called Wayne picked it up to wipe the sweat from his brow, before realising he'd taken the wrong one.


"No worries," said Nick, even though it irritated the hell out of him; Nick was fanatical about personal hygiene.


During the next twenty-four hours, the two men would be responsible for the exponential growth of the virus in South London.


When Wayne left the gym an hour or so later, he lit a cigarette and threw it on the pavement half-smoked, where it was swooped upon by a vagrant once called Reverend William Sallis (he had long forgotten about the 'Reverend' bit), who didn't care that the end was coated with another man's saliva.  Later, Sallis would drink from a bottle of White Lightning cider and pass it around his friends.  Later still, during a visit to hospital after a drunken collision with a passing car, molecules of mucus from his sneeze would land on his doctor, an hour before she clocked off for two hours of passion with her married lover.


A woman jammed up against the married lover in the underground rush hour crush the next morning delivered the first recorded case of bat fever to North Yorkshire, while a young man called Akio Ishikawa took two presents back to his family in Kyoto; the other was a working model of the London Eye.


As for Nick Greenaway, he coughed while the assistant in the flower shop wrapped the very tasteful bunch of irises for his sister, lifting his hand to his mouth a moment too late and signing the death warrant for the poor florist (whose vaccination date was the very next day).


As the deadly micro-organisms in his body multiplied, Nick became a one-man fever dispenser.  At lunch time, he passed the virus first to the barman, then to a couple he squeezed past as he juggled three pints back to his table, then to his friend Greg (Aaron happened to be naturally immune, though he would die a violent death the following year in a fight over three litres of bottled water), and, later, he and his girlfriend had sex for the last time in either of their lives.


Of the seventy million people in the UK in 2024, the majority were yet to be vaccinated against bat fever.  Across the world, many heads of state, members of parliament and congress, a few local and national government officials, royal families, heads of global corporations, members of certain aristocracies and the military had received their shot before vaccination programmes commenced, as had a very small number of scientists, doctors and technicians from selected industries.  Some, like Aaron, would be immune.


But not very many.

FYI, an excellent list that explains all types of transmission: HERE


TIPPING POINT: FREE!
May 5th ~ 9th only
Click HERE for all Amazon sites