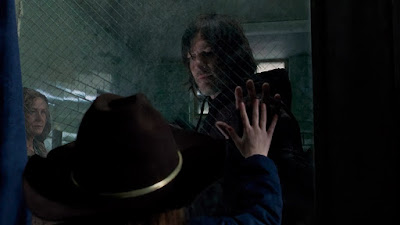 A huge thank you to Greg Nicotero, the writers and all concerned - absolutely gripping, lots of those TWD twists and surprises that no amount of 'spoilers' and predictions ever get right (thank goodness!), and not just one but two moments when I cried real tears - namely when Maggie appeared to save Gabriel, and when she reunited with Judith, the child she delivered on the floor of the prison, all those years ago.  Welcome back, Maggie— so good to see her looking like the happy woman Glenn loved, once more.

I imagine Mystery Mask Person will be a new character—we now know it's not Connie, anyway.  That was a jaw-drop surprise, wasn't it? 😲  An interesting development; at least Virgil seemed to have recovered some of his sanity before Michonne left him—and he was carrying the trusty orange back pack. 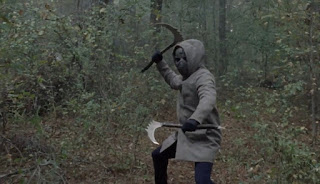 Back to Gabriel and co in the tower—who'd have thought the cowering craven of Season 5 would become an authoritative, brave leader?  So, so glad he didn't cop it, as many (including me) thought he might, especially after he stayed back, willing to sacrifice himself to save the others. It's okay, Gabe, no need to do any more penance.  Rick would have been proud of how he has progressed, and we couldn't have Rosita losing any more of her men! 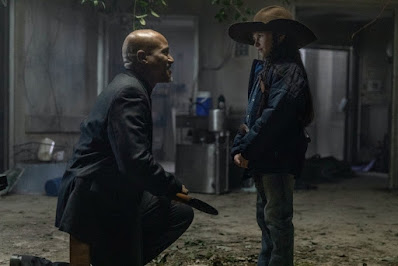 The death walk through the grounds of Grady Memorial (😉) made those similar forays in 102 Guts and 609 No Way Out seem like a pleasant walk down a country lane, and the danger of not knowing which ones were original recipe Walker and which might have a knife at the ready was so real.  Kelly's almost silent eye view was terrifying enough, but the part that really brought it home to me was Magna's face when she was surrounded by them—you could feel her fear, she was frozen with it, until Jerry put his hand on her shoulder. 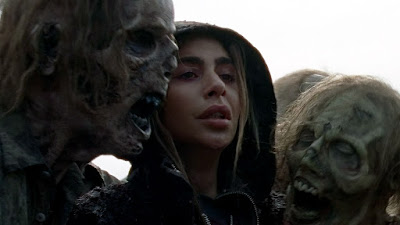 If not doom in the end, there was a certain redemption going on in this fabulous finale, where Carol, Lydia and Negan were concerned.  I felt so sorry for Carol when she got a dirty look from Bertie and a scathing remark from Diane—oh, and her face when she knew she couldn't save poor Beatrice, whose last, brave words implored Carol to take her pack.  You can understand why, but I suspect Hilltop might have burned anyway, whether Negan was freed or not. 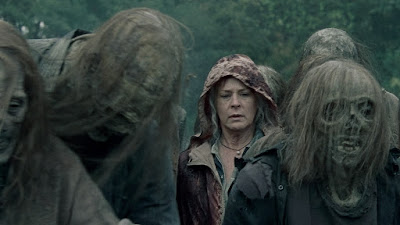 Was she really going to jump, after she guided the Walkers to the cliff's edge and Lydia pulled her back?  I don't think so; I thought she was just contemplating it for a moment.  I wondered if, more than that, she was looking down and thinking of all she had lost, all the tragedies over the years.  When I saw them falling off the cliff, though, I felt sad too, for them; they were people, once. 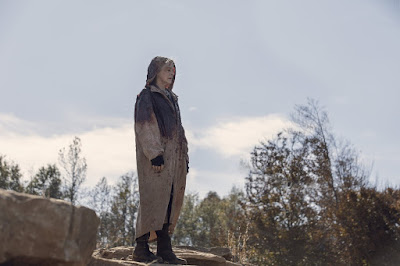 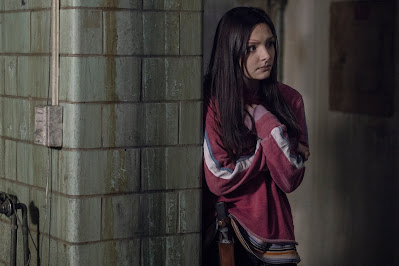 Lydia was the main hero of the hour, starting with her pointing out to Diane which Walkers needed an arrow in the chest, and of course she could walk amongst the dead with less fear than anyone else, in order to retrieve the backpack.  Ironic that it was the wearing of Alpha's mask that saved everyone, ultimately; there was something so poignant about Lydia assuming the stance of her mother as she led the Guardians towards the cliff. Also, during the horse-drawn disco version of what Daryl, Sasha and Abraham did in 601 First Time Again, she was able to detect that the Whisperers had mingled in with the herd, before the others saw them; if she had stayed behind, as Daryl instructed, there may have been many more deaths.  If anyone had any doubts about Lydia earning her place, surely they must be dispelled now. 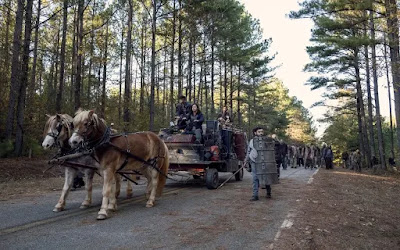 Lydia's scenes with Carol were so emotive; she said she wasn't looking for another mother, but I think she might be the person to help Carol break out of her endless quest to fill the void left by Sophia's death, that can never be filled.  With friendship, this time, though—because they have so much loss in common.  Maybe she will help Carol accept what happened, rather than going round and round in ever-intensifying circles of pain, with the loss of another child coming back to devastate her more acutely each time, and, of course, Henry was more than just a Sophia replacement.  Her life with him, Ezekiel and the Kingdom gave her what she had always wanted, but it all revolved around Henry. 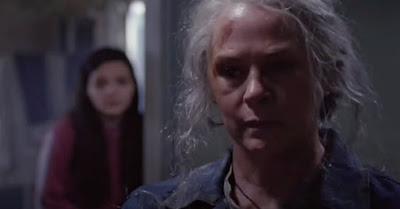 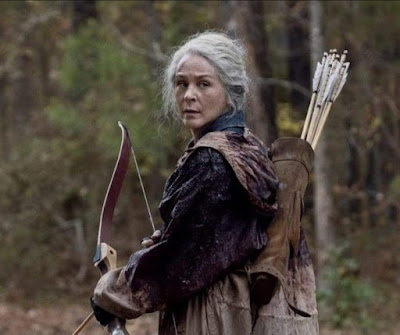 And so to Negan, who Daryl thought was too chicken, or whatever, to go out and face the 'Fee-Fi-Fo asshole'.

'You wanna be a part of this?  You gotta put your ass on the line, just like everybody else.' 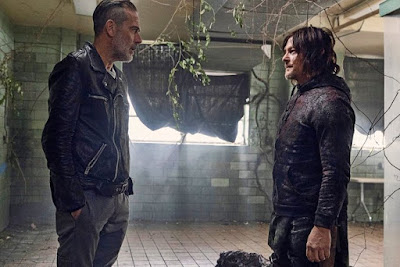 But putting his ass on the line was indeed his plan, as he disappeared down the lift shaft, finally providing the answer to the question we've all been asking: who would kill Beta?  Negan to start it, Daryl to strike the final blow; it had to be.  And what a kill.  The demented Jolly Green Giant's final moments, when he saw his own death as glorious, with the sepia flashbacks not of his old life but of the one he shared with Alpha, were masterfully put together.

One gets the impression that Negan owned a few Half Moon records in his time... 'You know who that asshole was?' 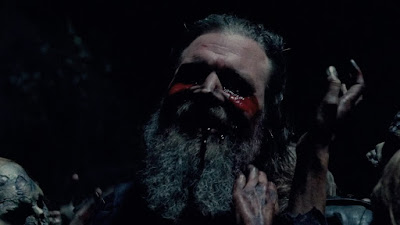 I noticed Daryl gave Negan an almost friendly punch/slap in the gut, just before they moved off, as if to say, 'Well done, come on'.  We will see where we go from here...

...as we will with what happens after the moment so many were waiting for: Daryl and Carol making up.  The way she said 'You good?' told us everything she struggled with, inside; the wall she has built up to stop herself crumbling, the fear she had that she had lost him.  Then, when he looked at her, you could see so much emotion in his eyes—years and years of love, pain, loss, all they have shared and endured together since the very start, when he gave her the axe to cave Ed's head in, in that camp in Atlanta.

'You still got me'.  That's a lot, coming from Daryl.  Who thinks spin-off may be set in New Mexico?! 😁  Looks like it's on the cards, or Daryl wouldn't have mentioned it.  Once Judith and RJ are safely settled with Aunt Maggie, in the Commonwealth, perhaps! 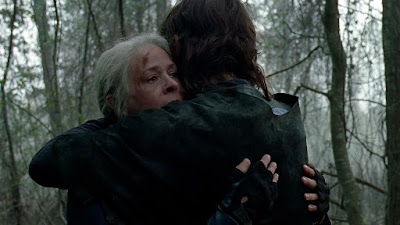 Meanwhile, back with our intrepid cyclists—the meeting with Stephanie was never going to go that smoothly, but at least the more humble but still lion-hearted and theatrical Ezekiel has retained his ability to give rousing speeches.  'This journey, your journey, must be completed'.  His acceptance of his illness is so touching, and it's also good to see how the apocalypse has made Eugene into someone he never knew he could be. 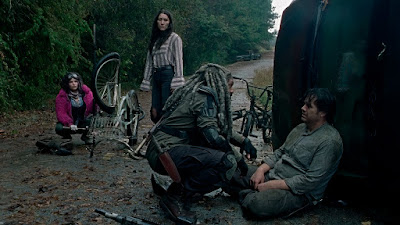 Enter the strange people in white armour.... well, we couldn't have a totally happy ending, could we?!  I am sure that all our friends have a long way to go and many dangers to traverse before they find safety and a place that will be to them what the Hilltop, Alexandria and the Kingdom were; I assume that Hilltop is gone, now, and can't see how everyone will fit into Alexandria, if there is even much of it left after Beta took the herd through. 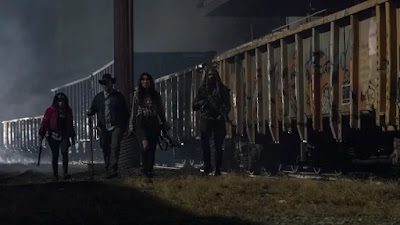 What do you think might happen next?  A few thoughts/ideas: 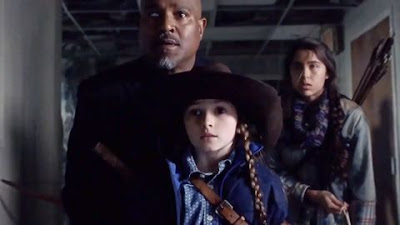 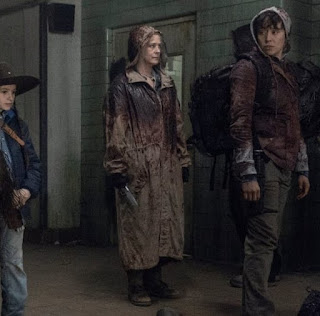