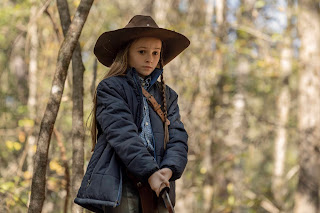 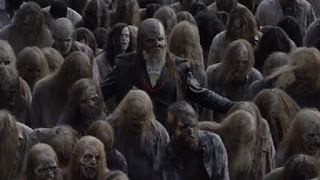 Huge thanks to all concerned for this excellent (if worrying!) end-before-the-real-end of Season 10; on the whole, I think it has been even better than Season 9.

As Beta's horde converged on the old hospital and the tower, I had one optimistic thought: Negan is there, and he will remember the methods used to escape when the Sanctuary was surrounded by Walkers, in Season 8.  Admittedly, that horde was made up of 100% genuine undead, but I'm sure whatever the newly skinny Luke is making will be useful, even though Aaron and Alden's part in the proceedings has come to a temporary halt...and I'm starting a protest if either of them get killed! 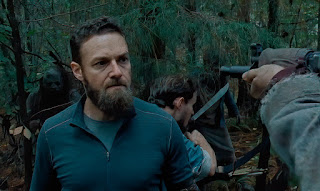 When Daryl was talking into his radio to what he hoped was Michonne, he said, 'We've got a plan to end this, one I think you'd like', which should have struck a warning bell even to him; he must know, by now, that none of their plans ever go as smoothly as intended, especially when their foe is an increasingly demented strongman in a Walker mask who, despite thinking that he's having conversations with the Guardians, manages to keep a grasp on reality when it comes to seeking them out. 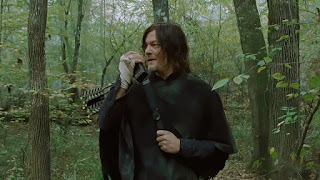 'Anyone alone for this long ends up selfish
or crazy—in her case, definitely both' 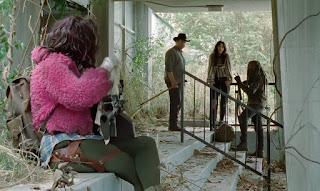 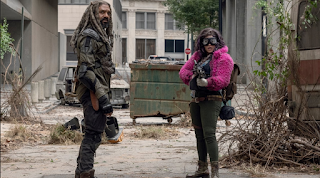 So we're not getting to meet Stephanie yet, then ... Princess is set to be a love-her-or-can't-stand-her character, I think.  I was torn between liking how Ezekiel knew how to converse with her in a way that was beneficial to all concerned, feeling sorry for her because she was lonely, and agreeing with Yumiko that they ought to get the hell away from her. 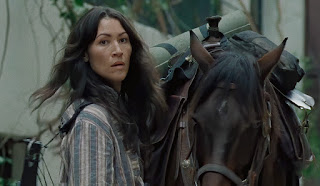 But generous heart won the day, and the scene in which Yumiko asked her to join them (though she should have cleared it with the guys first, right?) was kind of sweet; you could almost hear Glenn saying, 'It's still who we are'.  Ezekiel was a delight this week; he's beginning to become a favourite of mine, and I love how Eugene has completely shed the manipulative scaredy-cat of S4 and 5; he seems more 'normal' all the time. 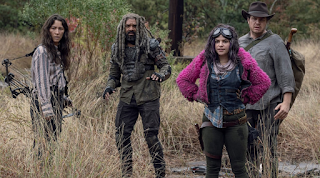 After the mines fiasco, I didn't imagine for a moment that Princess's garage would contain anything remotely motorised; I've often wondered why bicycles don't feature more, as they seem like the ideal post-apocalyptic mode of transport.  Tara mentioned them once (on the road to Washington in S5), but apart from the Scavengers using them to get to Alexandria in S7, I don't believe they've been seen in TWD world since this day, long ago...

'Being on the run like this, scraping by, reminds me of the old gang.
Seems like ages now.' 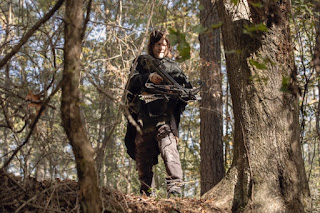 Even with all the fear and approaching danger afoot, this episode included some real tug-at-the-heartstrings moments, much of which carried haunting echoes from the past, but not always in a bad way.  Kelly's becoming such a cool member of our gang, wise beyond her years—if she can forgive Carol, everyone should.  Maybe it will seem to some that she forgave her too easily, but we have to remember that they live in extraordinary times, a permanent war zone in which anyone can die at any moment, emotions are through the roof, and normal standards do not apply.  Aside from the fact that a) Kelly doesn't believe Connie is dead, and b) Connie followed Magna back into the cave when she could have got out. 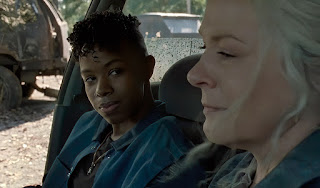 'I've heard the stories about you in the old days; we all have.
How you'd just go off and do things only you can do.
You can't give up everything about yourself because bad things happen.' 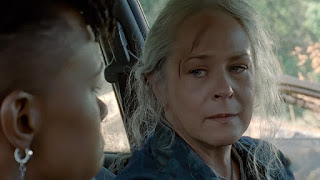 Then there was Eugene telling Princess that, 'I've made poor decisions.  Lied to folks', his eyes going just a little glazed, as if he was remembering that day on the road in S5 (shortly after Tara mentioned bicycles).

Star of the week, though, was dear, brave little Judith. Cailey Fleming was fabulous in this episode; just thirteen, and she can act like that?  Her fear for Michonne, and the fact that she misses her so much, were etched all over her face when Lydia said that 'not everyone gets to have a mom like yours', though I did wonder if she was thinking about the real mother that she never met, too. 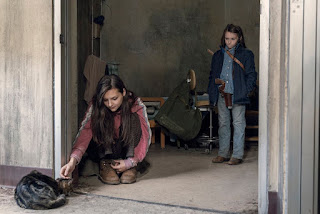 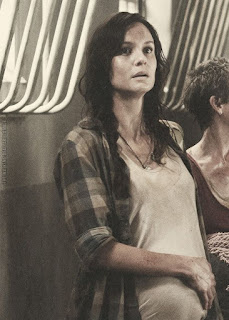 Later, when she was talking to Daryl, and she said, 'What if you were lost and no one could find you?' —she had to be talking about Rick, there, as well as Michonne, surely?  The words seem to fall out of her mouth as she admitted that she was scared Daryl would go away, too; you could feel every shred of the emotion she was going through: her bravery in not talking about it, but also, at that moment, having the courage to do just that—and her fear about losing more people she loves.


Daryl:
'There's a whole bunch of people back there that'll do anything for you'
'You've got a whole lot of family'
'Nothing can take the place of someone you love being gone,
but that doesn't mean that everything that follows is going to break your heart' 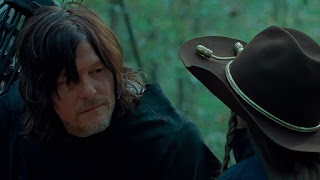 Beautiful, beautiful scene.  Judith is learning fast—she wants to be out there with Daryl and learn all that he could do, but that means hardening herself to the raw brutality of life outside the safe walls of Alexandria. Daryl knows this, sees that she is ready to learn about reality, and didn't try to shield her when he killed the injured Whisperer who left the pack to escape Beta's madness.  Daryl will teach her, and she'll grow up like Rosita, Michonne and Carol all rolled into one.  I hoped Carl was watching her, out there. 😢 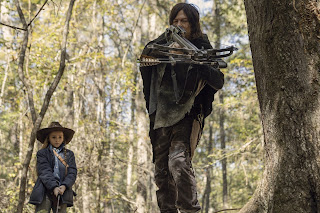 The whole mum-daughter-loss/uncle figure thing was echoed by the more difficult and less easily resolved scenes with Negan and Lydia—and I thought Negan was telling the truth when he said that he liked Alpha; I believe he actually had some feelings for her, and must have seen a little bit of the woman she was before. 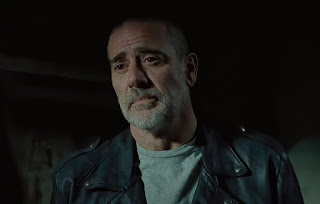 Everything he said to Lydia felt totally from the heart and genuine; she said, 'You only killed her so they'd think you were a hero', and yes, there was probably an element of that in it, but Negan's reasons for killing Alpha were as complicated and mixed as Lydia's tormented emotions about her. 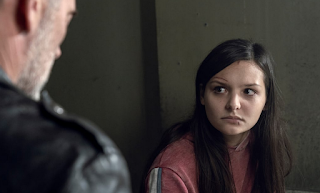 He was right when he told her that she would have to mourn her mother; the way she allowed him to comfort her in the end made me think that she's going to let him help her.  Hope so, anyway.  Even if she didn't want his stewed possum. 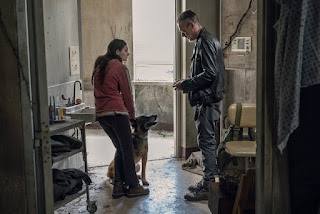 Finally, as far as Negan is concerned, I one hundred per cent agree with this, from @TWalkingDWorld on Twitter (click on to enlarge): 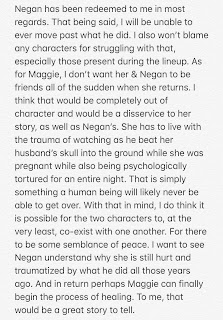 I did appreciate the locations this week, with Eugene's group looking genuinely wet and uncomfortable in the rain (don't often see raining scenes in TWD!), and also that terrific shot of the hospital, delapidated and covered in vegetation. 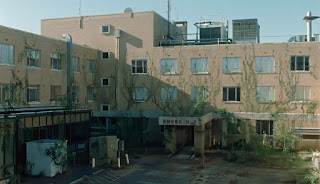 And so the deranged Beta, the Whisperers and the Guardians approach, in a climax that reminded me of the White Walkers nearing The Wall in that season finale on Game of Thrones: a vast, terrifying, seemingly unbeatable mass.  Will Beta be gunning for Negan, in particular, now that he is seen by others as the new Alpha?  Negan can't die! 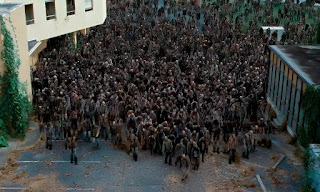 What a moment to be left hanging like this—we can only hope that it won't be too long before we can see them all again.  Stay safe, TWD friends; for now, I'll leave you with Judith's own TWD family ... starting with the moment Lori found out she existed 💕. 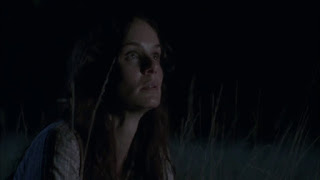 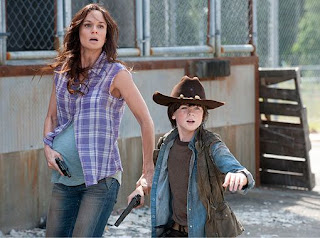 and my gif post ~
A Thank You Letter From Judith Grimes