I'm in the middle of writing a new novel at the moment ~ nearly finished the first draft, 114k words long so far ~ and so I've been a bit slack on the blogging front!  Stuff keeps occurring to me that might evolve into a blog post, but none of it has yet (I really must do that one about internet dating, though), so I thought I'd stick it all together in one post ~ two book bits and two telly bits! 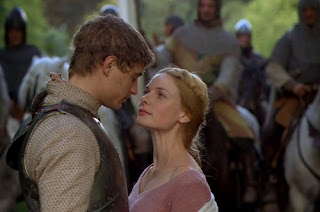 Edward of York meets Elizabeth Woodville ~ Elias and Lisa in my new novel!

The new novel
I'm writing another one taken from a story from history, like Kings and Queens and Last Child; this time it's the Wars of the Roses.  It's a stand alone and not in any way connected to the Lanchester Family of the other two.  This time, it's only based on the story rather than retelling it.  I did start off with the total retell, but it was far too complicated, with too many elements of the original that wouldn't translate into 21st century life.  I got to 30K words in before I accepted that it wasn't working, and completely rewrote - not an easy thing to do!  The working title is The House of York; it concerns only one family.  It's much darker than the family drama/romantic suspense of Kings and Queens and Last Child, with a strain of psychopathic murderous intent (or two) running through it, and the suggestion of sinister happenings from early on!  I hope to publish it in October (though at the moment I am convinced it's a load of talentless garbage that should never see the light of day) (it's a writer thing.....). 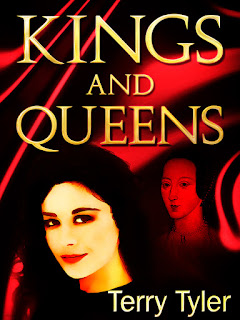 Get in there quick!
I had a new review for Kings and Queens the other day from a lady called SuzM that amused me.  She said she'd had a similar idea; the reason it made me laugh was that she said "I turn my back for 30 years and someone else goes and writes it".  Nice one, SuzM!  I know what she means.  Three years ago I wrote a novel called The Other Side.  At first, it appears to be the stories of four different women, but gradually the reader becomes aware that the characters are all the same person, living the parallel lives possible if different decisions had been made.  A short while after I published it the wonderful Kate Atkinson brought out her excellent Life After Life, which made me want to shout, "but I did it first!".  Oddly enough, mine has not been so wildly successful as Ms Atkinson's ~ now, I wonder why that is??!!  I'm glad, however, that my paltry offering was published earlier, so I didn't look as though I was trying to emulate such a literary maestro.  And the moral of this story is - if you have a good idea, do it quickly before someone else does it first! 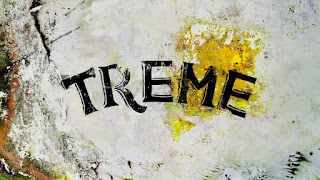 I'm currently watching this excellent HBO show on Amazon Instant Video and highly recommend it!  It's about New Orleans in the aftermath of Hurricane Katrina and is made by the same people who did The Wire; the Wikipedia link is HERE.  It's highly acclaimed by those who know their stuff about this tragic time, and the music is wonderful, of course.   Here's a link to the theme song/sequence ~ watch it HERE! 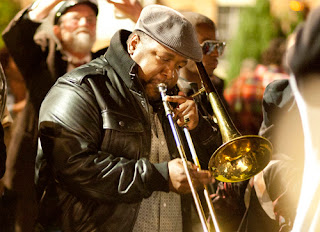 Fans of The Wire will enjoy seeing Lester Freamon and Bunk Moreland in starring roles, with appearances by Slim Charles, Prez, Ziggy and the bloke who played Bubble's anti-drug sponsor/buddy, Waylon!  You can also spot Michonne from The Walking Dead - and Elvis Costello! 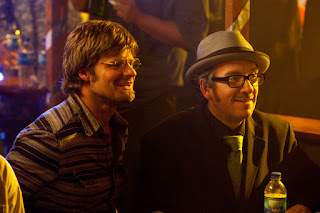 I meant to write a whole post about the final episodes of this prince amongst TV shows, but it never happened.  What did you think?  I loved it!  I found the gradual shift from the optimism of the 1960s to the attitudes of the 1970s so well portrayed, but also kind of sad; I felt nostalgic for the 1960s even as I was watching the way in which Don and Roger and co found the transition difficult as they grew older and less in tune with the popular culture of the time.

Well done to Peggy for the nabbing the suddenly-sexy-again Stan Rizzo... 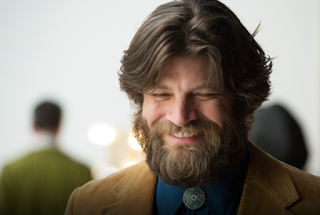 ....but I couldn't bear what happened to Betty - I thought the makers of the show were saying 'don't smoke, kids, this is what will happen'.  Sooooo sad!  I hoped they'd give her and Don another scene, though perhaps they had their farewell in that secret interlude a series or so back....  Great idea to have Roger finally copping off properly with Megan's saucy mum, but I wished they'd given Joan more than a business to keep her warm at night.  Still, they had to echo the ideals of the time - the early 1970s was, after all, one of the golden ages of Women's Lib, and who better to be its poster girl for the series than the strong-and-independent-but-still-sexy Joan? 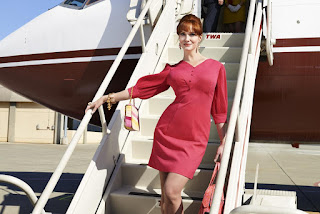 Best of all, of course, was the way in which the psychological car crash that is Don Draper finally embraced the 1970s....  and yes, he cried and hugged too! 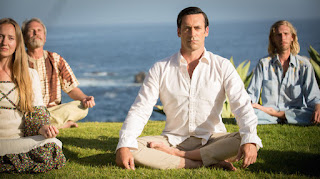 His walking out in the middle of the stifling corporate meeting was one of his finest moments... but don't you want to know what happens next??!  Thanks, Emma, for reminding me about the old 1971 Coke advert being played at the end ~ a reflection of the zeitgeist for the purpose of something completely at odds with it, an inspired choice of ending!  Here's my favourite character top ten, in case you haven't already seen it. 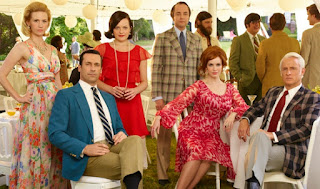