My weekly contribution to Rosie Amber's Friday Five Challenge ~ if you know what it's all about, please go down to the line of green stars to see my choice for this week.  If not, please read on!

The Friday Five Challenge is an interesting exercise for writers ~ it shows the little things that can put potential readers off that click-buy.  We click on a book because the cover appeals to us, but can be put off a purchase by the blurb, the price, or the reviews.

Anyone with a blog can join in ~ here's what you do:


IN ONLY FIVE MINUTES….

1) Go to any online book supplier
2) Randomly choose a category
3) Speed through the book covers, choose one which instantly appeals
4) Read the book bio/description, and any other details
5) If there are reviews, check out a couple
6) Make an instant decision: would you BUY or PASS?

This week I put a favourite subject of mine, Plantagenet Kings, into the Amazon search.  This was the first cover that appealed to me ~ Richard II is a king I know of only through Susan Howatch's brilliant The Wheel of Fortune and the BBC series, The Plantagenets.  This was my choice ~ DEATH KEEPS HIS COURT by Anselm Audley.  Alas, I didn't notice that it was a Kindle Single (a long short story of 78 pages), but my choice was made! 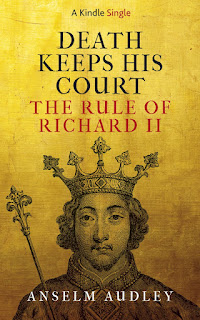 Cover
Sprang out at me ~ my eye always zooms in on mediaeval type drawings.  Very nicely done, I thought; I like the way the background looks like old parchment or rough sackcloth.

Blurb
Richard II was young, handsome, and elegant. Last living child of the brilliant Black Prince, he came to the throne bearing the hopes of his people on his shoulders. His court glittered; his tastes were refined; his portraits shone with gold. Regal, composed, aloof, he was the very picture of majesty.
He became a murderous, capricious tyrant. His favourites plotted against his family. He rewrote the laws of England to give himself absolute power. He raised an army against his own subjects.
His subjects deposed him. Twice.

This is the story of the forgotten civil war of 1387, which saw Richard set against his brave, ill-starred uncle Thomas of Woodstock. Of how a boy’s bright promise turned deadly, provoking his nobles to fear, flight, and finally open war. Of how a humiliated King set out on a course of vengeance which would cost him his life and sow the first fatal seeds of the Wars of the Roses.

From royal banquets to battles in the mist, Death Keeps His Court tells a tale of real-life tyranny, treachery and tragedy in the age which inspired A Game of Thrones.

Makes it sound interesting, if slightly over the top; I can't see how a story such as this could be done justice in 78 pages, and the style is a tad eccentric.  I think the tenuous tie-in to A Game of Thrones is a bit naff.


Reviews
Nine very short ones, three by people who've reviewed nothing or almost nothing else, a few mentions of it being interesting but too short.  It's selling well, ie, it's at #2061 in the overall chart and #1 in three genre charts.  This amused me: one of the 4* reviewers has given classic Victorian comic novel Three Men In A Boat by Jerome K Jerome a paltry 1*; as this is one of the most stunning pieces in the history of literature, I don't rate his opinion too highly!

Would I BUY or PASS?
PASS-ish ~ I certainly wouldn't buy it at 1.99, unless it had a lot more reviews that had something to say other than 'interesting read'.  I would, however, download it via Kindle Unlimited, and probably will do once I've given one of my current ten back, just to see if it's any good.  So it's a half and half, really!