Bored? Lonely? Just log on and order up your next relationship!

So, internet dating.  Have you had any experience of it?  It's perfectly fine to admit it, these days.  It is, honestly.  Nothing to be ashamed of.  Doesn't mean you're a loser.  Everyone's done it.  Or is that a claim made only by people who have?  Ah... 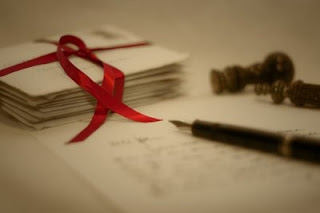 I decided to write a post on this subject (it was always waiting in the wings) after reading Tom Angel's about same; you can read his HERE.  Because it makes you go 'hmmph' when someone writes a good post on a subject you've been toying with, doesn't it?  Go on, admit it.  Oh, all right.  You don't want to admit to that and internet dating... 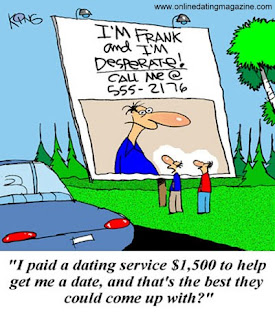 I first dipped my toe in the waters of this murky pool in the mid nineties, after the break up of a long relationship.  I just thought I'd give it a whirl, for something to take my mind off the mess that had suddenly become my life.  In those days, your only choice was Dateline (remember those adverts in magazines?), dating agencies or... the 'friendship column' in the local paper.

(Talking of Dateline, wasn't it fun to fill in the form in the name of someone you didn't like, and send it off so that they'd receive their Dateline ideal partner suggestions through the post, preferably when they were having breakfast with their husband/wife?  What?  You've never done that?  Oh ~ no, no, of course, I haven't, either, I've just heard that some people have...) 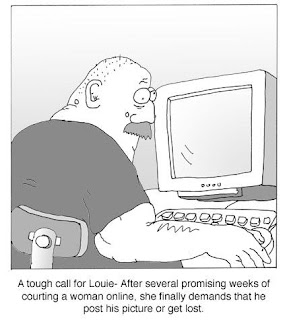 In that brief period between old fashioned Lonely Hearts columns and the popularity of match.com etc, these 'friendship' columns were quite popular.  I answered a couple of ads; you actually communicated via a PO box number.  With a letter.  How quaint is that?  A friend told me, "if they don't send a photograph straight away, they're ugly."  The first one I met did send a photograph.  He looked pretty hot.  From the side of his face from which the photo was taken.  Alas, the other side made Quasimodo look like actor Josh Holloway.  I kid you not.  The next one was a nutter, and sent me long pleading missives when I said I didn't want to see him again, apologising for getting so drunk on our first date.  It wasn't the alcohol consumption that bothered me, it was the casual revelation that he'd come out without taking his anti-psychotic medication.  Okay, I'm lying about that.  But I think I might be on the right track. 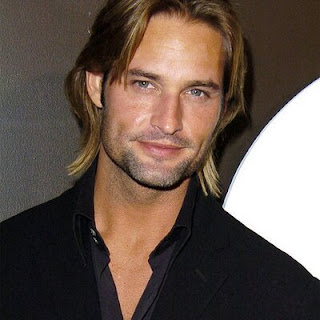 Another friend suggested I might find a better class of lonely saddo in The Guardian.  I exchanged a few letters with a guy who said people often mistook him for Mark Knopfler.  Eventually I managed to get a photo out of him.  All he had in common with the Dire Straits front man was the receeding hairline. 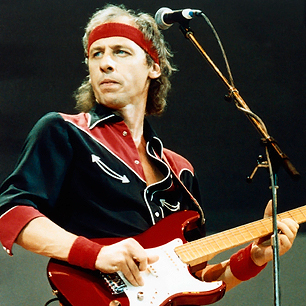 After these experiences I went back to my normal method of choosing romantic partners, ie, happening upon men in pubs/at parties and discovering two weeks later that I'd got myself into yet another relationship with a man whose serious emotional baggage/alcoholism/general loser-dom had not been apparent on the first night.  Oh well.

When next I decided to give this sort of thing a go, it was 2008 (I'd just got rid of another from the emotional baggage/alchoholism/loserdom crew) and everyone was doing it.  My friend Hermione had recently met her new man through Dating Direct (she's still with him, incidentally) - like me, she was a veteran of much romantic folly and couldn't be bothered with starting all over again.  "It's so much easier like this," she said.  "You cut through all the crap; you know you're both on the site because you want a partner, full stop." 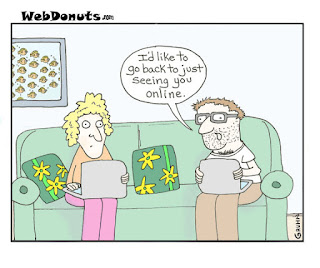 Obviously some people who advertise are after something other than a partner; newspapers and those ghastly 'my ex-con uncle got my lesbian grandmother pregnant' type magazines run many stories about lonely women who meet conmen online, or married men who just want a few bits on the side.  My experience, though, has only been of men who are looking for someone with whom to share their lives, or at least a girlfriend for 'now' if not for ever; call me naïve but I think this is still why most of them do it.  For every bigamist scam artist you read about in 'Real Life Scumbag' magazine there are 10,000 perfectly nice guys who are just a bit fed up with TV dinners for one. 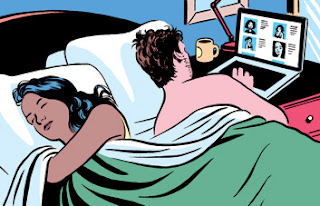 I went out with four men.  Three I didn't fancy; you know, you sit down with them in the pub and think, oh dear, I don't fancy you at all, so you make the best of the night and go home as soon as is politely possible.  That's after you've been through the half hour of hoping you will start to fancy them once you start talking to them (even trying to convince yourself that you do...).  One I did quite like but didn't fancy me!  Look, when he put in his 'ideal woman' list that he liked size 10 non-smokers, I did tell him that the hand of my size 14 body held a John Player menthol king size approximately 15 times per day.  He didn't say I was a disappointment in the flesh, of course, any more than I did to the ones I didn't fancy.  But I could see that lack of interest in his eyes, not to mention the lack of conviction in the phrase 'I'll call you later in the week'.  When I went to the loo, I wondered if he'd still be there when I got back.  Happily, he was...

.... unlike the chap my friend Francesca met in the Red Lion, Cromer, who left her sitting at a table.  She came to meet me for a drink afterwards and said she suddenly realised she'd been sitting there for about ten minutes... and that he'd taken his car keys...!  Or the one who arranged a date with my friend Jemima, and said after half an hour that he was afraid this meeting would only be a drink after all, not dinner as discussed, as he needed an early night.  At eight o'clock in the evening....  thank you, ladies, for these tales, I managed to work them into my novel Nobody's Fault! (Yes, that was a cheap book plug in an article that's about something entirely different.  I promise I won't do it again.)  Both women just thought it was funny.  At least it didn't waste their time.  Says to me that women are prepared to give the man they don't fancy a chance, whereas for the man it's all about the physical.  No, really??!!  Well, who would have thought it, eh?

A few months later I met the man to whom I am now married (not via Dating Direct!) and thus ended my foray into that side of online life.  Would I ever do it again?  Well, I sincerely hope I won't ever need to, but yes, I think I would.  I prefer to be in a couple than not be (yes, I can admit that!), and I reckon I'd follow Hermione's train of thought; it's so much easier than meeting people the 'normal' way, especially when you've been round the block so many times that the pavement shows the grooves of your tread.  I'd say it's a good idea as long as you have realistic expectations; you are unlikely to find romance with a capital R.  But you might find someone nice to do stuff with, if fun outings are a bit thin on the ground.

My internet dating help list:
I think the reason many people are disappointed by their internet dating experiences is simply because it lacks that thrill, the glance across the room when you see someone you really fancy, that is-it-going-to-happen excitement, the mystery, the buzz of the chase.  It's a bit like going for a job interview.  I've actually contemplated handing out my romantic CV ("Reason for leaving: Felt I was in a rut and needed more of a challenge" "Reason this position terminated ~ Temporary contract only, terminated on return of permanent employee") ~ perhaps I'll save that for another post as this one is already getting too long!

I'd love to hear about any of your internet dating successes ~ or horror stories! 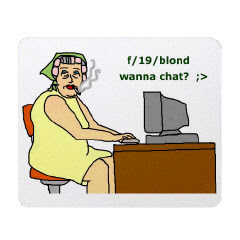 Email ThisBlogThis!Share to TwitterShare to FacebookShare to Pinterest
Labels: domestic, how to find love, how to mend a broken heart, humour, internet dating, Josh Holloway, looking for love, relationships