How many did you get this year? Come on, you know what I mean... 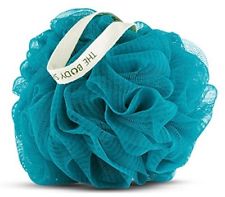 I've been getting at least three a year since they first appeared in gift toiletries sets in around 1995, and until last year I just left them on the side of the bath until I got fed up with seeing them around April, and chucked them out.  Or pushed them into the bit in the airing cupboard between the linen baskets and the wall and hoped they'd go away. 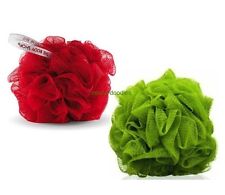 If you have an impromptu clear out of the bathroom at any time of the year, I guarantee you will find up to five of them.  They lurk. 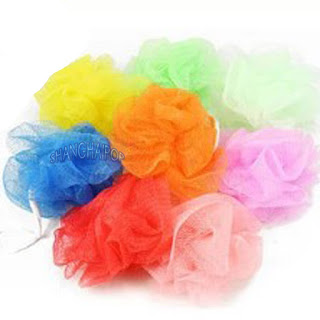 This year I received two, a rather meagre white one in a Baylis and Harding set, and an abundant, lush pink one that's currently still sitting on the coffee table with a self-satisfied, well fed look about him, next to his Soap and Glory friends.  Probably been at the Thorntons.  The ones I haven't eaten, anyway.  Boy, did I have heartburn when I tried to go to sleep last night.

(update: when taking more bottles of 'body wash' out of their gift packs to put away, just now, I discovered a third one hiding away between the bottles!)

Last year I finally discovered what they're for, by putting one in the bath, adding soap and applying it to my skin.  They're to make your skin go all red, and then fairly smooth.  Kinda like body lotion does, except body lotion misses out the red bit and smells nicer.  I'll stick with the body lotion, I think.  And make a plea to the people who make bath sets to please, please, put bubble bath back into them!

Bring back the bubble bath!!! 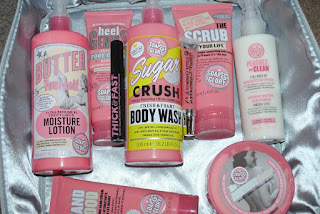 Yesterday, I got shower gel, (result!  I don't have to buy any for either of us until at least November; it actually didn't run out until about three weeks ago, this year!), the oddly named 'body wash' (it's, like, shower gel), body lotion, and moisturisers with practically every name you can think of - hand cream, foot cream, knee and elbow cream (okay, I made that up), and a very thick one like Pond's Cold Cream which has a name too stupid to repeat.  Not as ludicrous as last year's 'body polish', though.  But no bubble bath.  Perhaps they think we're too busy buffing our skin with the strange objects, polishing ourselves all over and applying different creams to each part of the body, to lie back in bubbles. 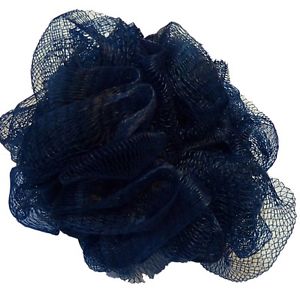 I hope you had lots of nice presents!!  I decided yesterday that I would eat what I wanted, with the result that I ate as many chocolates as I could (not as many as I wanted, but as many as I could - there's a difference); today I will instruct Him Indoors to hide them.  He doesn't actually need to - I can't stand the sight of them today.

Have a good Boxing Day, whatever you are doing! 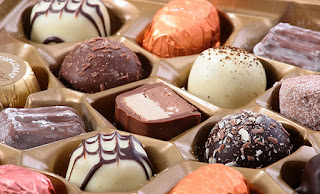