For my review of the first two episodes, click HERE


Never a dull moment, eh?  So much variation in last night's episode, I loved it! 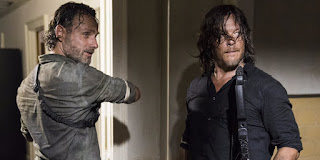 Twice we saw the new 'shoot and ask questions later' Daryl, when he killed Morales and the guy in the yellow trousers, even after Rick had given the latter his woorr-rrd...  our Daryl is hitting back at the Saviours to purge the guilt he still feels about Glenn's death, I'd say, and it made me wonder ~ will this be a bone of contention between him and Rick?  And will he show mercy to Dwighty-Boy, when the time comes?  I'm guessing yes.  Meanwhile, someone close to me commented that he should have done the same to Big-Girl's-Blouse Jesus as he did to Yellow Trouser Guy...


...which brings me to Jesus's tussle with 'is-he-totally-losing-it-yes-probably' Morgan, who seems unable to find a middle ground between 'all life is precious' and 'kill anything that moves'.  I'm with Morgan and Tara on this one.  What do you think the captured Saviours are going to do, Jesus?  Sit in a trailer and twiddle their thumbs until they're let out, then start baking bread along with the Hilltoppers? 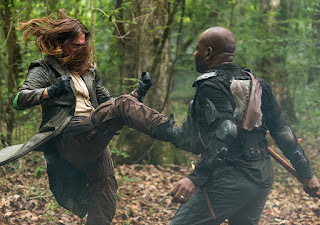 'I cannot sanction the harming of the scumbag who murdered dear sweet Benjamin.  I will, however, kick a guy who is supposed to be my friend and is also around 20 years my senior, in the chest.  I rock'.

Talking of Morales, I was most disappointed to see him Dixoned before he and Rick ever had a chance to catch up.  ('So what did happen to Merle?  He ever get his hand back?'  'Hey, you ought to see the Widow Peletier now, bro.  No more moaning about her missed Maytag; she's a lean, mean fighting machine!').  Think that was a storyline opportunity missed ~ could he have been brought back into the fold, as a double agent?  ('We won't talk about you holding me at gun-point.  You have my woorr-rd.  But watch for flying arrows'). 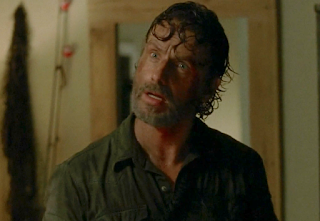 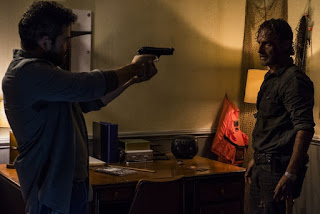 Who thought Eric was going to die, then?  Last we saw of him, he was Walkering off to join the herd ~ but wouldn't Aaron have run after him to do the knife-to-head thing?  I'm thinking he was let go so we can see him sink his teeth into an appropriate person's neck later on.  So (the lovely) Aaron takes Baby Gracie, and presumably heads back to Alexandria.  Which I'm missing ~ I want more Michonne! 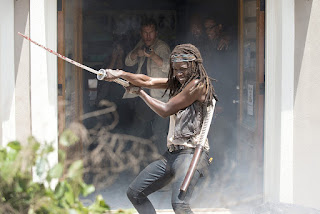 I was thinking, earlier, about the brilliant first ever scene with Shane and Rick in the car, and wondering if the dialogue is not as good as it used to be ~ but then I thought of episodes like the terrific last talk between Rosita and Sasha at the end of the Season 7, and am sure there is more like that to come.  And probably more 'human' episodes, and hopefully some good Walker stuff too, for those of us who want more zombies!  A few less cheesy lines now, please, writers ~ we all know that they're going to stand side by side and take the world back.  We've got that, okay?  And we know Ezekiel's a good guy, and we know why he acts like a pantomime king (did community theatre in the old world, likes to play act as well as motivate his kingdom, etc etc), but perhaps a little less of it? 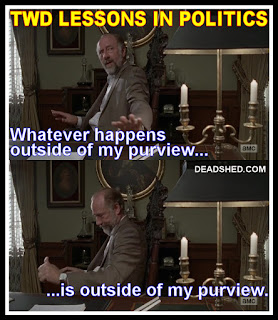