As soon as I'd watched the super-extended pre-titles bit, I thought, okay, so who dies tonight?  Gabriel or Gregory?  It's looking like Gabriel... but has he been bitten, or does he have Virginia Walker Innards disease?  Is a Virginia Walker anything like a Virginia Creeper?  And, of course, we know that Gregory is now safely back at Barrington House, eating other people's pancakes. 😜


What a terrific episode ~ I've always loved how the TWD writers show us the same time frame again, from the other point of view.  Finally, we see a little bit of the pre-Walker Negan who once had a wife who he treated like the aforementioned Walker innards, and gain insight into why he thinks his methods are justified: he's created order, stopped people like Rapey Davey having their way, identified the fighters and the workers, understood that people can't work for him if they're dead.

One can even see why he really thinks that Rick caused the deaths of Glenn and Abraham.  The jury is out on that one, but he says, 'I killed them, but Rick caused their deaths'.  We know that without Rick's leadership, everyone in Alexandria would already have been killed by the Wolves, and probably the Saviours too, but that's another story. 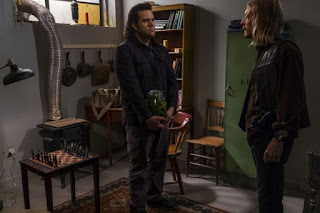 Meanwhile, Eugene brings Dwight a gift of pickles for standing up for him in the chaotic, leaderless meeting when all those Negans thought the real Negan was dead, little knowing that Dwighty-Boy is really trying to cover up his own treachery, which it doesn't take him long to suss out ~ will they work together, or will Eugene rat Dwight out?  I'm thinking the former, now that Negan has told him he'll die slowly if he doesn't find a solution to the current siege problem....  Remember Abraham, Eugene! Do the right thing!

... (but isn't it nice to see Dwight sounding like the half-way decent guy he sort of almost was, back in the burnt forest?)

A further meanwhile, back at the wrecked truck with one dying Saviour, Rick reminds Daryl that they can't explode the Sanctuary because of all the innocent workers, and because that's still who we arr-rrr ... well, he doesn't actually say that, but I betcha it was on the tip of his tongue.  I can see both their POVs.  Daryl ~ end it today.  Rick ~ be the good guy, but risk getting everyone else dead.  They fight, Daryl zooms off in a hissy fit, and Rick travels along the road, like a wounded War of Independence rebel who's had enough. 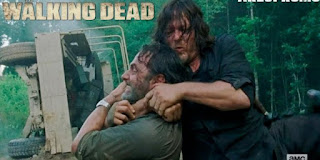 And then he sees The Helicopter.  Or does he?  Rick is given to hallucinations, both visible and audible, as we all know.  Is this an homage to Episode One, when he really did see a helicopter, and Glenn and the gang inside the department store (sad: all of whom are dead now) told him he was imagining it?  Or this time, will it come back for him?  And who was the guy with the binoculars? 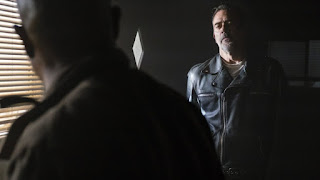 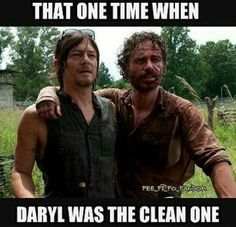