Review: HOW IT'S GOTTA BE. S8:8 #TWD mid-season finale #TheWalkingDead

Reviews:
Time For After
The King, The Widow and Rick


What did you think?  Loved it, always love it, but I have to admit to being slightly disappointed that there was not a little more resolution.  I knew Negan wasn't going to get killed, but couldn't we have had just a little glimmer of hope?  No, it's the end of S4 and mid-season S6 all over again, when all seems lost ~ still, maybe Carol will save the day, like before... 😉

What a shock, though!!!  The best bit of the whole episode was the end... not because I want Carl to die, I don't, because he's Rick's main reason for everything he does, but because it was so well done, and so unexpected.  As soon as Richonne walked towards him in the sewer, I thought, 'hang on, is it just me, or does he look sort of ill?'  Oh, but to go out via Walker bite, after all this time... hope it pleases those who complain that it's all about gunfights now: we're reminded that the Walkers are every bit as deadly as they've ever been.  That last shot, as the camera panned back... so good. 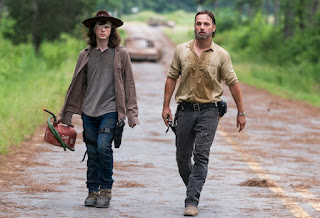 "You're going to live, Dad," said Carl earlier, as they walked along (flashback ep 1) with The Can.  Carl's been getting more profound over the last few episodes, though, so we should have known; in TWD world, saying a load of deep stuff or having some really ace lines often means you're about to snuff it.

....or might he be the first person to be immune?  Hmm.  Oh, and nice touch, directors, having Daryl sitting in the sewer with his arm around the totally gorgeous Li'l Ass Kicker.  Daryl + kids = total winner every time. 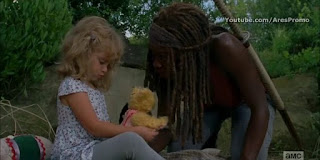 Couldn't find a new pic of Daryl with her, so here's Judith with Step-Mom, instead.

Back to the fight, and we find out that wine-slurpin', pickle-eatin' toad Eugene facilitated the Negans' exodus from the Sanctuary.  Yet as he lies abed, guilt overcomes him.  Probably remembering the good ol' days when he used to spy on Abraham and Rosita shagging, and get to sit and cry when the bad people came, while other people did his fighting for him.  So he gives Dr 'erb Carson and Sweaty Gabriel a way out...


Eugene in the library self-help section, watching Abraham and Rosita 'at it'. 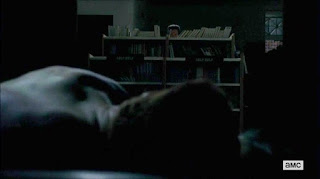 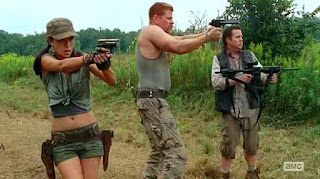 So, who else thought that Simon's gang had killed Jerry?  I did.  But no, the shot was for some bloke called Neil who I'd never noticed before, and hurrah for that clever li'l cupcake Maggie who gets back at them by puttin' on a show ~ and killing one of the Saviours in the Hilltop pen.  And she has 38 more.  She walks away crying, but don't worry, Maggie; Hershel and Glenn would have been proud of you.  Never mind Big Girl's Blouse Jesus, sitting there pondering with a heavenly light on his face, during one of the 'let's have a quick look at everyone's facial expressions' interludes.

Reluctant Saviour Gavin reluctantly tries to take control of the Kingdom; unlike when Negan professes his love for Carl and Daryl, you believe that Gavin really did like Ezekiel on those days when they'd pick up the Walker-fed pigs.  Ezekiel ends his mammoth sulk and somehow manages to get all the Kingdom-ites one side of the gate while he is on the other with the Gavster and his men; I couldn't quite see how he did it, not least of all because the whole episode was so damn dark, but Carol looked a bit concerned.  Fear not, Morgan is outside, minus his stick!


And so Alexandria burns.  Sorry, Deanna, it never did become a thriving community with commerce and all those pie-in-the-sky ideas, but who knows?  Still, a shame about all those solar panels (Negan was a bit gutted about them, too), and those eco-loos and that running water, and... ah well.  Maybe our gang can have Barrington House, when it's all over. 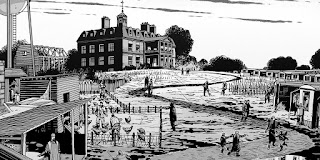 ....but will Dwight be with them?  He should be.  I'm sure he's saved more than he's killed now, and best of all.... Daryl's got his waistcoat back! 🎉🎺 Hurrah!🎺🎉  All he needs to do now is get his hair a little professional trim, maybe have a few layers cut in, and he'll look as hot as he did in Season 4, once again! 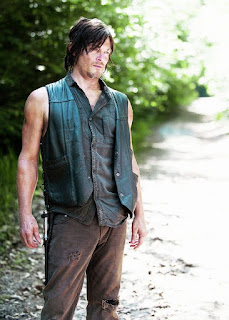 So what's to come?  Do not forget the little light of hope that is the lovely Aaron, and Enid (who I can never look at without remembering her eating that turtle), who have taken the Oceansiders some whisky in the hope that they'll get pissed enough to agree to fight with them, or something.  Mind you, it wasn't a very smart move to gun down the grandmother of the key fighter.  We shall see.  Go Aaron.  Show Eric he didn't become a Walker in vain. 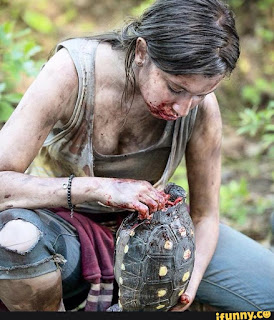 I mean, she could have taken the shell off, and cut it up a bit first...

To sum up ~ plenty of action, but please can we have a little bit of resolution soon?  And now we have to wait for months.... though I am sure it will be worth waiting for!  And although some of the players are, sadly, no longer with us, and perhaps we will lose a couple more, maybe one day it really will be something like this...for a while, anyway.😌

For serious obsessives only: I've read several articles that claim it's only two years since the zombie outbreak, in TWD time.  Judith is proof that it's longer; further explanation follows.

Lori did not get pregnant until possibly a month after the outbreak, so Judith was born 10 months after.  She has got to be at least two and a half, I'd say, judging by how she looks.  Thus, we're around 3 and a half years in.
Also:
1st summer: Outbreak.
1st winter/spring: After the farm, when they were on the run, between S2 & S3; in S3, Andrea mentions having spent 8 months in the woods with Michonne.
2nd summer: At the prison/Woodbury: S3
2nd winter: A whole winter/spring between S3 and S4, during which time they grew a whole load of food, built barns, etc, took in loads of new people, etc.
3rd summer: Fall of prison after return of Governor
3rd winter: On the road/Terminus, before Alexandria.  When Rick, Michonne and Carl are attacked by the Claimed gang, it's clearly autumn/winter.
4th Spring/summer: At Alexandria.
4th autumn: First appearance of Saviours.  This has lasted approx 3 months, as Maggie mentioned being in her 2nd trimester (though you wouldn't know it), and she was pregnant a few weeks before it all started to kick off.