Last week: Review ~ The Lost and the Plunderers 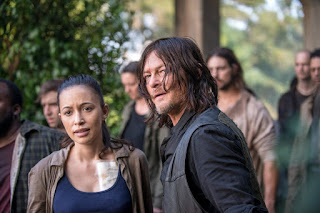 Not quite such a fab episode as last week, but I'm sure it pleased those amongst us who want to see zombies not gunfights! 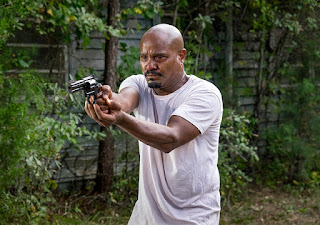 I was a bit worried at first; when Gabriel was doing his 'I called for help, help came' stuff again, I thought, oh dear, are we supposed to believe that the Man in the Sky is leading him and Dr C out of the wilderness?  Come on... but no.  Just when I thought 'this is getting a bit daft', as I did with Ezekiel and all his 'and yet I smile' ridiculousness in S8:4 Some Guy, the silliness/schmaltz got turned on its head.  As Ezekiel's 'motivational' over-confidence was but a vehicle to show us how delusional he was.... 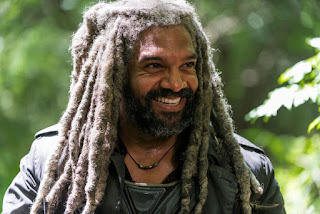 And yet he smiled... but not for long.

....so the smashed piggy bank revealing car keys, the Walkers getting trapped in the traps while sight-impaired Gabriel stepped over them, the bullet that somehow hit the Walker, not Dr C, were but lucky coincidences, and Gabriel's belief that God was delivering them to safety was nothing but optimistic, blind faith.  A moment later they were back in the Saviours' truck, and Dr C was dead. 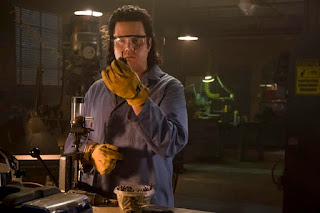 Gabriel was delivered to Eugene's workshop, where Eugene explained to Negan how, if he couldn't make enough bullets, they could kill their enemies by catapulting pieces of Walker over the walls of Hilltop ~ what, in the lame hope that some Walker innards will seep into their ears and up their nostrils?  Not sure how this is going to work; if I remember rightly, the Saviours used to eat the Kingdom's Walker-fed wild pigs, and nothing happened to them.


I do love a dangerous journey, and Daryl and Rosita leading the Alexandrians through swamps filled with alligator-style Walkers ticked the right boxes.  Along with Tara (who has always got on my nerves but more so right now), the original Alexandrians (Tobin, Scott, Kent etc) are sure that Dwight is leading them into a trap, but Daryl and Rosita can see the bigger picture ~ and something tells me that Daryl doesn't want to kill him anymore.  Everything he did was for Sherry, Dwight says ~ and Sherry is, we are reminded, still out there, so I assume she will pop up just when she is needed, sooner rather than later! 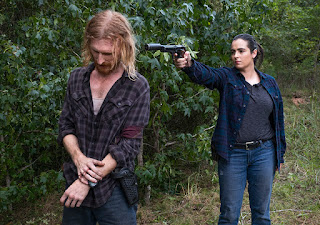 Dwight gives himself up to lead the band of Saviours away.  He's fast becoming the hero of the hour - and I bet I was not the only one to find myself on his side rather than Tara's.

Back at the Hilltop, Carol, Morgan and Henry sit on a log looking at the nasty Saviours, and Carol wonders if she feels so fond of Henry because he is actually Sophia's brother (Macsen and Madison Lintz).  Maggie presses her hand to her stomach and wonders when it's going to stop being totally flat, given that she must be into her fifth month by now ~ I'm guessing that Dr Siddiq will eventually save Glenn Jnr's life, so that we can forgive him for (indirectly) causing Carl's death. 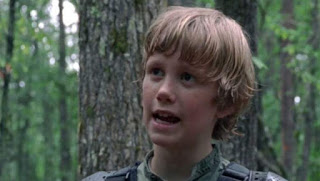 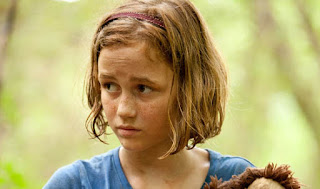 But Maggie is no soft touch, and makes the decision to starve foolish Gregory and the captive Saviours, along with Alden the Most Slimy. 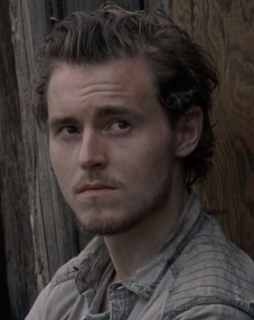 The food situation is not too desperate because Jesus is out scavenging ~ maybe he will find a way of getting that supplies-filled truck out of the lake.... you know, the one that he and Daryl managed to let slip in S6:10 The Next World, when they were having their 'my dick's bigger than yours' tussle. 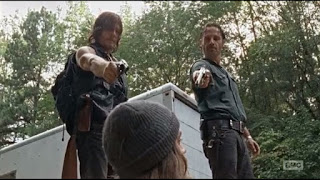 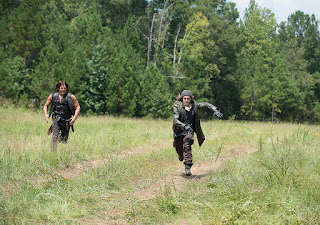 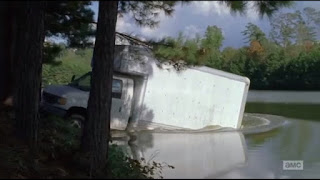 And so our gang finally get to the Hilltop, Daryl having remembered to take Judith from Tobin/Barbara first, to make the heartstring-tugging entrance we girls want.

It's never not a good time to include this....

But although Carol springs forward to see her favourite man again (with you there, Cazza), it's not one of those wonderful TWD reunions we love so much, for we see Daryl mouth one word: Carl.  Poor Enid ~ her despair and tears were so real that my eyes watered too.  To those who say the show is not as good as it used to be, I'd ask you to compare that scene to Beth's ludicrous attempts at crying.


What next?  Will Sherry turn up with beer and pretzels just in time?  What's Simon going to cock up next?  Where is Ezekiel (I can't actually remember)?  Will Gabriel lose his faith?  What will happen when Negan finds out about The Kingdom?  Will Aaron arrive at the nick of time with Oceanside?  Will Jadis get to use the Super-Mega-Zombie-Masher again? 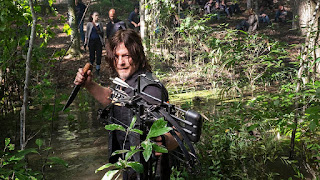 I hope all this, and more, will be answered next week!