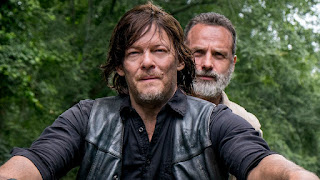 Another fabulous episode, written by Geraldine Inoa ~ could the excellent cliffhanger mean the end for Rick?  Hmm...like when Glenn got trapped under Nicholas in S6:3 Thank You, I'd be willing to bet my Daryl's Walker ear necklace soap-on-a-rope that the writers would not despatch any of the Atlanta Five with so little ceremony!


I hate seeing Daryl and Rick at each other's throats, but the oft-employed 'trapped together in a hole and forced to talk it through' plot device was well-used here, in a great scene with some perfect dialogue.  And maybe Rick sees that Daryl is right...


'I'd die for you.  I'd have died for Carl.
But you're chasing something for him that ain't meant to be, man.' 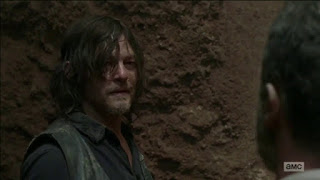 When Daryl talked about the debt Rick owes to Glenn, was he really talking about his own debt, because he thinks he caused Glenn's death?  I'm guessing our Daryl's pre-Walker life didn't include much navel-gazing with therapists, though, so he's not too in tune with his own motivations.  Anyway, it was great to see them as brothers once again 😊

...though as soon as Eugene said that the two Walker herds showed no sign of merging, I thought, I'll take that as 'they will', then.... Rick, you should have known!  But, nevertheless, he tries to lead the Walkers away from the camp, because he is not yet ready to destroy his bridge. 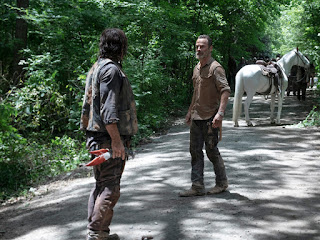 Terrific Michonne stuff in this episode - I loved the start, the comparison between the Carl's dream-type plans for new world building, and the necessary savagery of the world outside Alexandria's walls.  Best of all, though, I liked how she wasn't taking any shit from Negan, when he tried to tell her that they were alike, and that her inner warrior is glad to be unencumbered by those she loved.  But she's one of the very few who won't let him get to her.... like Daryl and Maggie, she won't forget this....

.... and you're not getting Lucille back any time soon, matey.  Yes, you both do what you have to do to get shit done, but the difference is that you get a kick out of it.  Now eat your sandwich and know that Michonne has got you sussed.... 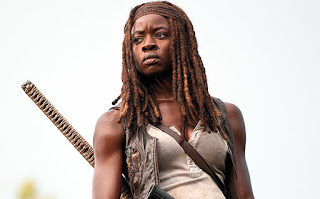 Meanwhile, back at the falling apart bridge metaphor, Carol shows Judd Savior who's boss in a great 'you go, girl' moment, which was nicely left hanging for next week.  She's right: the Saviors have had enough opportunities and must now go their own way... I felt that this scene was, like various with Michonne, setting the two of them up in Rick's mind as worthy leaders when he's gone (this is following my perhaps naïvely optimistic theory that he's going to leave rather than die, of course!). 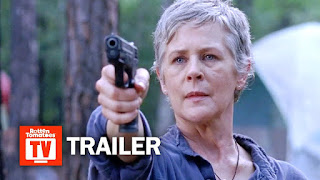 And what of Maggie's mission to Alexandria?  The 'Father Gabriel of the Hilltop', Jesus, gave us another reminder that Georgie wants Maggie to join her gang.  As soon as Rick got Rachel (aka Princess Negan) on the walkie, it was obvious that Maggie would not be stopped at the gates... I liked that Rachel was reading an old teen mag, incidentally. Nice touch. 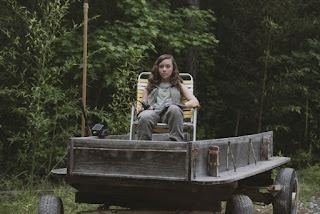 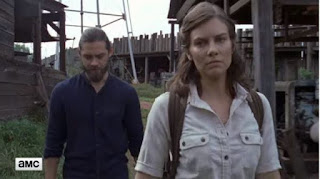 Finally... I'm not 100% convinced by Jadis-Anne's turnabout; those scenes were, for me, a bit like the weaker moments of Seasons 7 and 8.  But yeah, I suppose if she felt that she would never fit in at Alexandria, given all she had done before... I'm guessing it's necessary for the coming of The Whisperers, anyway, so I'm good, as they say. 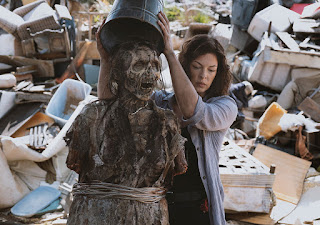 Now, for anyone who would like moderate spoilers:
On IMDb he shows as being on until Episode 8, but I just saw This Tweet
(click for link; includes excerpt of Ep 5!) 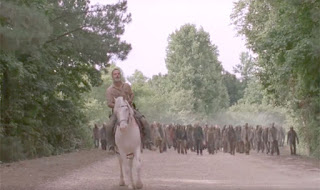 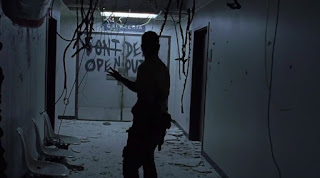