Review: #TheWalkingDead S10:02 WE ARE THE END OF THE WORLD 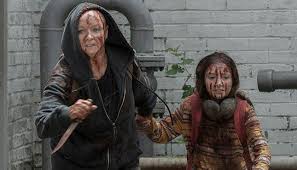 Wow, wow, wow, what a fabulous episode!  I adore flashbacks and 'this is how/why it got to this' backstory, and this ticked every box.  Samantha Morton has created such a convincing and multi-faceted character in Alpha - and yes, I too am frustrated about not seeing Beta's whole face, even though we know what Ryan Hurst looks like; I imagine that this won't happen until his last moments, whenever they will be. 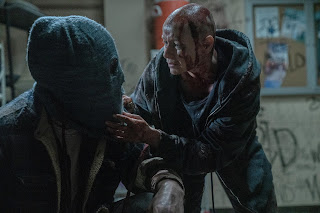 Of course clever Alpha sussed out the Guts method of walking with the Walkers, early on—and, like Negan and the Governor, she is one of those who not only discovered their inner psychopath when the world ended, but is strong, intelligent and charismatic enough to persuade weaker people to follow her, and believe in her ideas; even to emulate her. 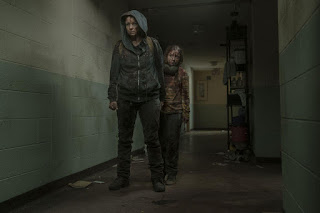 Beta, however, came over in this backstory as a damaged person, the sort of misfit who kills people to satisfy a bitterness against the world—as the episode progressed, I could imagine him shooting up MacDonalds or indulging in human sacrifice some day, if the world hadn't ended.  Something about the way he'd written 'I am the end of the world' on the walls, I guess.  I wonder if we will ever find out who the scratched off face-Have a Nice Day t-shirt guy was, whose face he took ... and so they moved from balaclavas and covering themselves with Walker guts, to the Walker masks, so that Beta might keep the lost one with him, always.  Brilliant. 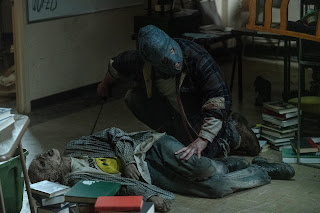 Showing that the two of them didn't just zip from nought to sixty as soon as the world changed has added such depth to the story, and an episode like this is probably what Negan and the Governor could have done with - the 'why' is so important. (Incidentally, I liked the posters in the place where Beta was living seven years ago: Hope Corner, and Believe - Change). 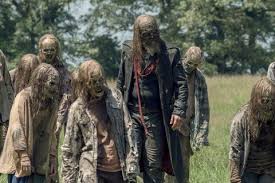 This was such a strong episode all the way through, from the uncovering of Alpha's weaker side as Beta found out that she hadn't killed Lydia after all—will this lead to her undoing?—and the creation of Gamma, who killed her sister to protect the pack leader.  The sister whose baby Alpha decided should be left to die, currently being cared for by Earl now that Tammy Rose is dead, if I remember rightly. 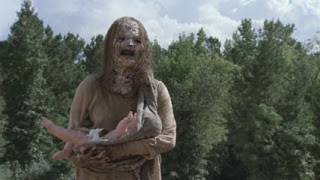 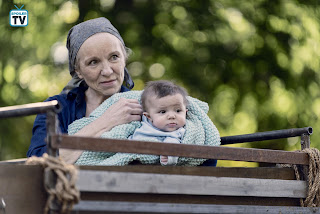 ...We are strongest when we kill our own blood, the most honest way to bring order to chaos...

But some of that pack liked what they saw at Hilltop—safety, livestock, normal lives. Is this likely to cause problems for Alpha in the future?  I'm guessing yes, especially as she has plans for them to see it up close so they can see it is a 'fantasy'.

They will fear us because of what we did—and she and Beta talk about their 'mission'; one assumes this is just to kill everyone, or get them to join the pack. 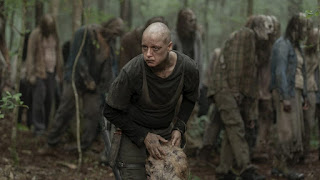 The Whisperers is one of the more fantastical aspects of this world, but whereas I always thought—only my opinion, don't shoot me!—that the King Ezekiel/tiger and Jadis's junkyard gang elements felt too comic book-ish when compared with the rest of the series (try imagining Jadis at the farm or Ezekiel and Shiva at the prison, and you'll see what I mean), the Whisperers have been presented in a less bizarre way; you can imagine a potential killer like Beta rising up to become everything he always wanted to be in such times—and Alpha could be seen as the dangerously warped version of Carol; she's discovered great strength that might have remained hidden forever had the Walker apocalypse not happened.  And so those two housewife/mothers will meet head on...

.... and finally: that last scene, showing Alpha and Carol facing each other across the landscape - double and triple wow!!!  I looked all over for a picture of it, but can't find one yet. 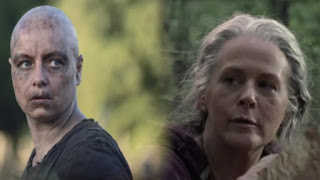 Some feelings of déjà vu that I liked: the reflection of S8:03 Monsters, when the younger Lydia said 'we're all monsters now' (I thought of Rick looking at himself in the mirror over baby Gracie's cot, after he'd killed her father), and the way Lydia called them 'the monsters' like little Sam Anderson did in S6, not sure if Beta was one, too. Then there was the scene of the Whisperers walking over a field in either the early morning or evening light, just before Gamma's sister saw the Walker with the baby sling—it looked exactly like the herd approaching Hershel's farm in the pre-titles bit of Beside The Dying Fire.

And who best to do it but Carol?

Email ThisBlogThis!Share to TwitterShare to FacebookShare to Pinterest
Labels: Review TWD, Review TWD S10 episode 2, The Walking Dead, TV, TWD, TWD Family, We are the end of the world