Fighting the good fight together for ten years 😍


After Rick takes over Alexandria, Daryl is involved in the quarry plan and has his first meeting with the Saviours,
while Carol is back home fighting Wolves (and Morgan)...

...and then the Saviours enter the game.  Carol knows she will have to kill again, and hides from reality in a relationship with Tobin.

Carol's not happy with the plan to kill the Saviours at the outpost...

...which goes badly for Carol and Maggie, with them forced to kill, horribly
—and Carol begins to realise she can't do it anymore.

Then Denise is killed by Dwight, Carol watches Daryl bury her, and he tells Carol he wishes he'd killed Dwight when he had the chance. 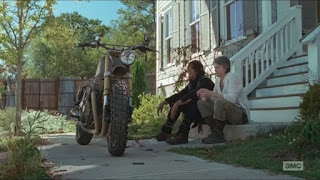 ...and Carol, unable to kill anymore, leaves Alexandria, getting injured in a tussle with Saviours on the road.

Carol is taken to the Kingdom to recuperate, and goes to live in a nearby house—thus, she knows nothing of what Negan has done to the Alexandrians.
No one knows where she is, until Daryl finds out that Kingdom Richard has plans for her.  Not for long....

...at last, Daryl finds out where Carol is - the most emotive TWD reunion of all

When Carol finds out what Negan did, she goes back to the Kingdom and persuades Ezekiel to join in the fight.

Much gunfire later, Daryl gets back to Hilltop and tells
Carol about the loss of Carl

A year after the fighting ends, Carol lives at the Kingdom with Ezekiel, and Daryl is running the Sanctuary—but he's not happy.  Knowing this, Carol agrees to leave Ezekiel and Henry in order to relieve Daryl of his position.

Rick's idealistic utopia comes to an end with his disappearance... and Daryl, heartbroken, wanders off to live in the wilderness on his own.

Six years later... Carol is married to Ezekiel, with Henry her adopted son...

....but she knows where to find Daryl

She even gives him a haircut...

...and persuades him (and Dog) to go back to Hilltop with her.

After all those years of peace are about to end, though, with the coming of the Whisperers.  And Henry is killed....

Carol is beside herself with grief, and can only
communicate with Daryl - she gives Ezekiel back his ring 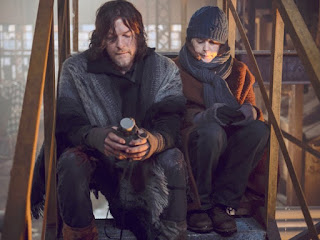 Daryl settles back into life at Alexandria, but Carol takes herself off
alone, on a boat.  Many months later, she's back, and meets up with Daryl at Oceanside.

But there is more fighting, and Carol meets up with the woman who killed Henry, pulling her back down...

—but she's ready to fight again.

Email ThisBlogThis!Share to TwitterShare to FacebookShare to Pinterest
Labels: The story of daryl and carol part 2, The Walking Dead, TV, TWD, TWD Family, Will daryl and carol get together