The many faces of Daryl Dixon ~ a character study. #DarylDixon #TheWalkingDead


I was asked to write this character study some months ago, before Season 8, for another site's proposed 'Daryl Dixon Appreciation Week' that did not, in the end, come to pass, so I thought I'd put it on my own blog for Daryl appreciators everywhere!  It's an in-depth look at our favourite zombie survivor, showing how he's developed from the 'redneck asshole with an even bigger asshole for a brother' (his words!) to the man who everyone would like to have beside them when fighting the Walkers and Negan. 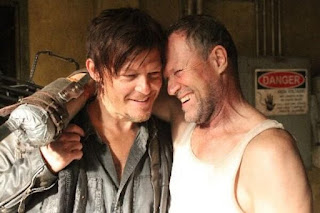 Daryl and Merle
The Little Brother

Merle was everything to Daryl: his brother, both parents, mentor and best friend.  Daryl respected, feared, relied upon and looked up to him, and moulded himself in his image, to no small extent.  Merle taught him self-sufficiency; remember the conversation with Andrea, when they were looking for Sophia in Season Two, about him getting lost in the forest for nine days when he was a kid?  Merle had shown him how to survive—and not only in the wild.  He taught him how to put on a brave face when he was being beaten by his father, and, after his mother died, how to live on his wits.  Merle shaped the younger Daryl—so what would happen when he was no longer around? 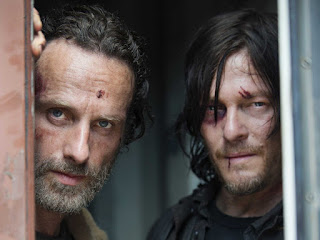 Daryl and Rick
The Brother Outlaw

Come the end of civilisation, Merle gets himself handcuffed to a rooftop then disappears, leaving Daryl with the group of survivors that he and Merle had planned to rob.  Although never slow in speaking his mind, it's notable that he accepts Rick as leader of the group immediately and without question, and, for the most part, does as he's told; he's learned from Merle to respect the authority of the stronger man.  When the brothers reunite, Merle mocks Daryl's status as Rick's wingman: 'You used to call people like him sheep'.  But in the new world, Daryl and Rick are not Outlaw vs. Lawman.  Now, they're both outlaws, fighting the Walking Dead and shared foes together.  Free from Dixon Major's shadow, Daryl has discovered values of honour and responsibility that Merle tried to quell, but Rick has brought to the fore.  When Rick says to him, 'You're my brother', late in Season Four, you know those ties go just as deep as any blood. 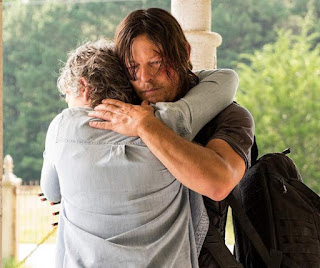 Daryl and Carol
The Family Man

The pairing that everyone loves—but are they brother-sister, very close friends, or could their love ever become romantic?  Their special bond starts when Carol loses daughter Sophia, and, more than anyone else, Daryl goes the extra mile to find her.  In searching for Sophia, is he trying to save the little boy who was left out in the woods?  To reunite child with mother, as he couldn't be with his own?  His relationship with Carol brings out a side of him that previously had nowhere to go: his instinct to love and protect—the man, not the boy.  Carol herself echoes this sentiment, when they're in Atlanta searching for Beth in Season Five; she tells him 'Back then, you were a boy.  Now you're a man'.  She's the person who sees how insecure he is, too—in Season Two, she reassures him that he's every bit as good as Shane and Rick; only she sees this lack of confidence in him, hidden by his wall of not caring.  Now they're reunited, we must watch and wait... 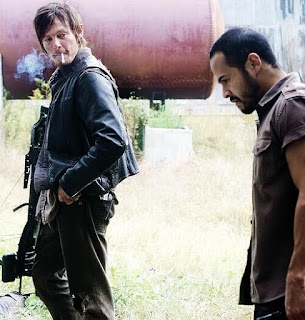 Daryl and Martinez
The Competitor

They had just one scene together, but it was such a good one.  As they competed with each other to kill Walkers in the most daring and artful way, we saw the little boy in Daryl, who wants to run the fastest, jump the highest; growing up in poverty, maybe all he had to show off about was his physical ability.  Afterwards, they bonded over cigarettes instead of train sets and model cars.  Daryl didn't hate the other man, even though they were on different sides; he and the equally loyal and trustworthy Martinez would probably have been comrades if they'd fallen in with the same people. 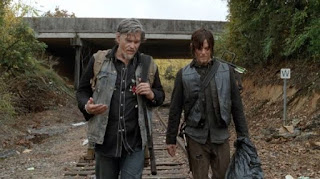 Daryl and Joe
Boy to Man

When Daryl is lost and alone and teams up with Joe and his 'Claimed' gang in Season Four, we see (and he realises) how far he has come since his pre-Walker days.  Merle would have fitted right in, but although Joe refers to 'men like us', Daryl knows that all they have in common is being able to survive in the wild new world.  Daryl has changed; the decency brought out by Rick, Carol, Glenn and the rest of our group is here to stay. 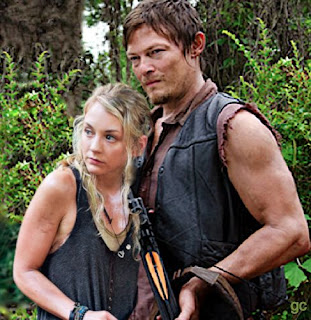 Daryl and Beth
The Protector

What strange bedfellows, to have ended up on the run together after the fall of the prison.  At first, Beth's optimism, naïveté and girlish behaviour irritates him, but later he becomes her teacher and protector.  He shows her how to survive (one shot with his crossbow and Beth quips 'Soon I won't need you at all!'), and her glass-half-full attitude to life rubs off on him and gives him faith.  She makes him believe that yes, there are still decent people out there.  She's the first person to whom he opens up, albeit when he's full of moonshine, but at last he feels safe to show his vulnerability.  Daryl doesn't trust many people, but he recognises a genuinely good heart, and can see this in Beth.  Would their relationship have developed into something else?  Sadly, we will never know. 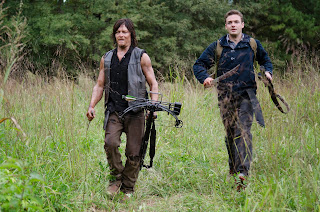 Daryl and Aaron
The Fellow Outsider

... and Aaron points out that Daryl can tell the difference between a good and a bad guy, too.  This is another strange pairing, and an oddly touching one: the gay, educated, middle-class aid worker and the redneck with the crossbow who, pre-zombie apocalypse, had never been outside Georgia.  Aaron makes the point that the rest of the community is wary of both of them for different reasons, but what they also have in common is the need to go off on their own, away from the safe haven.  Daryl mentions how stifled he feels in Alexandria, when they're Walker-trapped inside the car in the Wolves' territory.  As with Beth, Daryl trusts Aaron enough to talk about his feelings.  Aaron's warmth, acceptance and invitation to become his co-recruiter gives him confidence; once they've become tentative friends, Daryl decides that living in the über-straight-laced and middle-class Alexandria might be okay, after all. 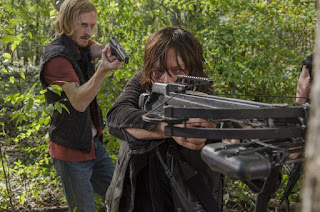 Daryl and Dwight
The Role Model

A complex relationship indeed.  By the time Dwight meets Daryl in Season Six, there is little left of the young terror that was Merle's apprentice.  He's grown in strength and wisdom, and is confident enough to give a second chance to someone who held a gun to his head.  Then, when Dwight does the dirty on him and, later, kills Denise, all Daryl feels is hatred and desire for revenge.  Few people have brought out such ferocity of emotion in him, but even at the darkest hour, when he is filthy, eating dog food, and at absolute rock bottom with Dwight as his captor, Daryl is still the bigger man - and Dwight knows this.  Later, Daryl is given more insight into his adversary's motivations, and there is a split second of commonality between them.  Still, though, when the tables are turned and it's Dwight in the cell, Daryl wants to kill him.  Rick stops him, but would he have gone through with it?  I suspect their relationship will change yet again.  Sherry said in her goodbye letter to Dwight that he saw in Daryl the man he used to be.  I think he sees in him the man he wants to be; the new world has made Daryl grow from wastrel sidekick, to a man respected by all who meet him—even Negan.  As he said to Aaron when they were trying to catch Buttons the horse, 'When you've been out here a while, you become who you really are'.


And what is Daryl? A man of truth and honour who doesn't waste words, and will do anything to protect those he loves.  And if he ever fancies jumping in the shower, there are ten million women who will offer to scrub his back 😜 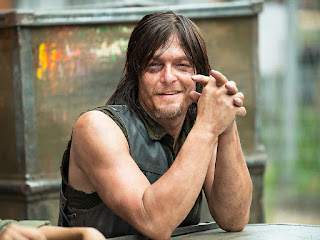