A shattered Rick succumbs to Negan's control at first,
so that no one else will be killed.

But Negan goes too far, when he kills Spencer and Olivia.

....and Rick agrees that the time has come to fight back.  A great reunion with the escaped Daryl, and the gang go forth, with a plan....

First, they must gather an army 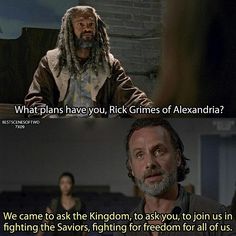 and keep Daryl safe for now, in the Kingdom

Jadis and her Junkyard crew are more problematic, but Rick comes out smiling.

In the meantime, weapons must be amassed, deals made - some with unexpected new friends...

...and Rick and Michonne have a mini-break at the fair.

But he's confident that they can win, until Jadis double-crosses them,
and Negan is back in charge... for now.

Next comes all out war... but before that a walk with Carl

...a meeting with old friend Morales, no longer so friendly, and Rick comes to blows with Daryl over strategy.

The plan starts to work, and Rick gathers evidence
to persuade Jadis to change sides yet again.

But then everything stops when he loses Carl.... 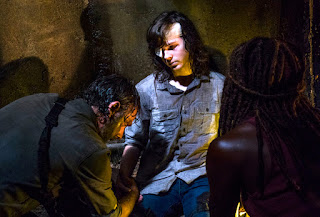 Michonne is with him after Carl dies, the two of them alone at Alexandria after it has been almost destroyed in the war with Negan. 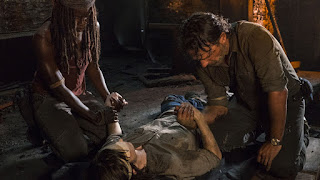 Back to Hilltop to make plans, and see Judith.

A car chase after Negan, and he and Morgan come together again, doing things they would never have done if Duane and Carl had been alive... but still he can't read Carl's final letter to him.

But there is still Michonne...
and finally he reads the letter, and Carl brings him back.

The war comes to a close, at at last.

And Rick's mercy prevails over his wrath

Bringing forth his new world? 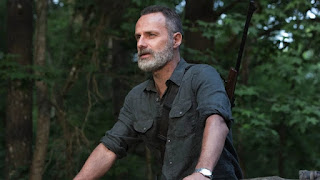 But too many problems still exist... 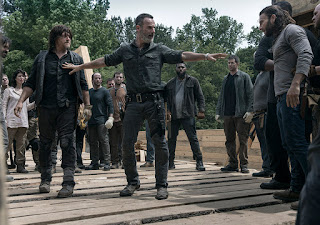 ...along with a few happier moments.... in another life, perhaps.