An excellent short, sharp shock opening this week, with Rosita running from The Whisperers - as scary as any horror film, the hint of what she can hear but cannot see more terrifying than any Walker.  Thank you to Vivian Tse for writing and yes, expertly directed by the lovely Michael Cudlitz! 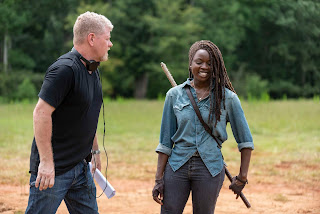 I like these slower episodes, sinister rather than death and gore; the most frightening is always that which bides its time, below the surface.  As you need a variation in pace in books, these make the action-packed episodes that follow more of a shocker - especially when they contain a whisper of terrors to come...what did Connie think she saw on the journey to Hilltop? 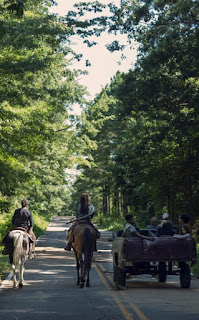 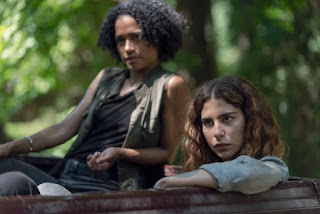 Good to see lots of Daryl this week - the ultimate survivalist (snake stew, anyone?), and the archetypal loner; just him and his dawg, 'cause the world of people can be too painful.  A stroke of genius, giving him a dog, and, as ever, the scenes with him and Carol tugged at the heartstrings, especially when she sorted out his hair, and he told her, 'They never found the body, ever.  After a while it just got easier to stay out here.' 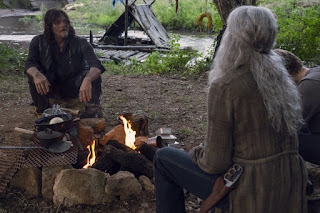 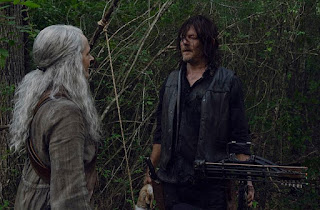 What with the X-shaped scar on his back, like the one we saw on Michonne last episode, and all the stuff left unsaid by Michonne, particularly with regard to Maggie, is there a hint that a whole bunch of other dark stuff happened during the time jump that we don't know about yet?  Especially as the communities are clearly estranged from each other now... 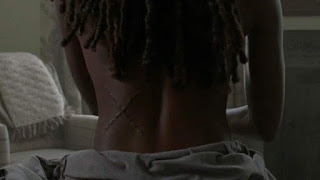 Incidentally, I loved the meeting along the road with the spear-carrying Hilltoppers; it could have been set in medieval England, when messages were carried from one town to another by the fastest riders. 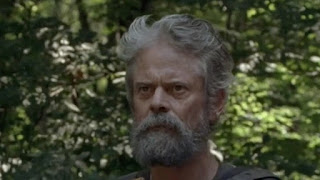 Back to Daryl - his taking himself off reminded me of Season 2, after he'd been fully committed to the search for Sophia.  Afterwards, the loss cut too deep and he left the group, to be on his own, unable to bear the company of others.  Remember those conversations with Carol, Lori and Dale?  Back then, though, as now, he didn't stray too far from those who care for him... and Carol knows now, as she did then, that he does need them, really. 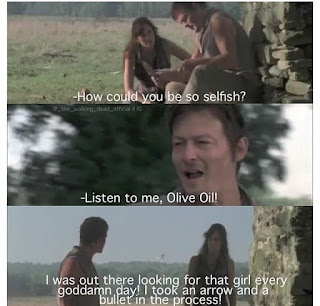 Carol was as brilliant as ever in this episode; how artfully she persuaded the ever-trucculent Henry and Daryl together.  As the realist she is, she knows people; she sees that Henry and Ezekiel's idealism could be their downfall.  And she understands Daryl better than anyone, as she always has. 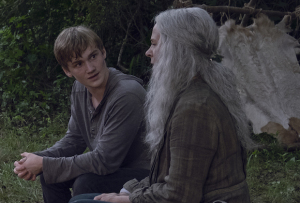 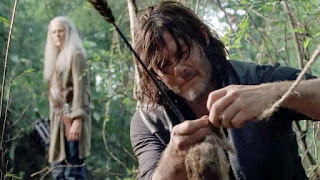 As for Michonne, it seems the loss of Rick (and whatever might have happened in the ensuing years) has affected her as Terminus did Rick; that experience started him off on the road to lack of trust in anyone.  Now, Michonne is not cutting Magna's gang any slack at all, until they've proved themselves; I loved her face when she talked to Magna. 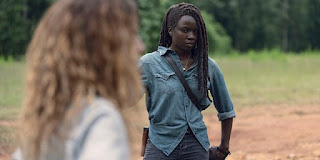 I think the new group are integrating into the show very well - Luke is lovely, Yumiko, Kelly and Connie seem cool, and I bet Magna will get over her initial strops.  Another good touch - the way they refer to the Walkers as 'sickos'.  I've always liked how the writers have made sure each group has their own name for them (Biters in Woodbury, Roamers in Alexandria, lame-brains, skin-eaters, etc), as of course they would. 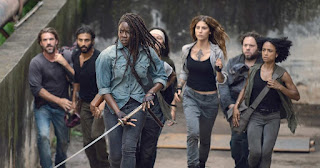 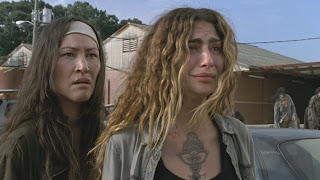 'Michonne ain't so bad.  I used to be a Savior.  We were real assholes.
Then I got with the programme.' 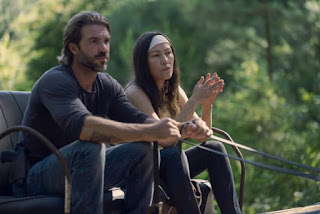 And so to Hilltop - okay, I was wrong, it never occurred to me that Jesus would be its leader, albeit a singularly unenthusiastic one.  He's not a leader type, he's a restless loner.  Like Joe Claimed said to Daryl, ain't nothing sadder than an outdoor cat thinks he's an indoor cat.  Perhaps he should have just said no, and let super-secretary Tara do the job, as I am sure she will, eventually. 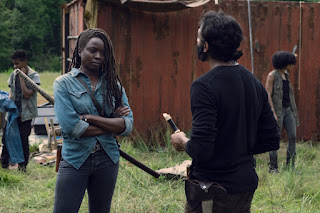 The final scene, with Dog, Daryl, Aaron and Jesus riding off to save Eugene was a perfect piece of cinematography...

I think this mid-season finale is going to be staggeringly good! 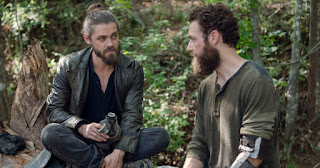 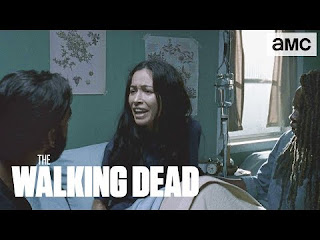 .... and here's a bit more info from Binge Rampage; some stuff you've seen before, some you haven't, and more about the Whisperers.  That shot that is possibly Ryan Hurst as Beta looks terrifying!