As it begins, so it ends...Review: #TWD S9:5 WHAT COMES AFTER #TWDFamily #TheWalkingDead

Days Gone Bye:
some of Rick's most memorable moments
(gif post in 3 parts)

Brilliant, and thank you, Andrew Lincoln, Scott Gimple and Matthew Negrete - one aspect of TWD that keeps me watching is that it is never, ever predictable, and Rick being spirited away in the helicopter - see, he didn't just imagine it! - was inspired.  Same injury, different time... but was Jadis really saving him?  Him being a B, not an A, after all?  We shall see; some good news, later on! 😎 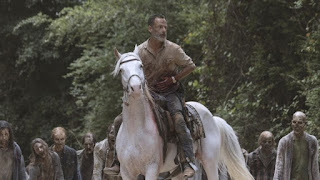 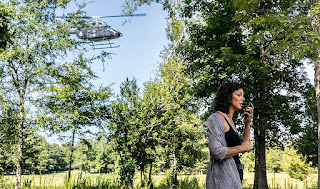 Great touch, having him fly away to the sound of Space Junk... added a bit of 'quirk' to an episode we thought was going to be a total tissue-soaker.  If only there was still a Glenn to show him the way out this time, eh?


Last time he heard that song...

I did read somewhere about one of The Whisperers wearing Rick's face, in the comics.  Maybe too gruesome for the TV show?  Hope it won't happen.... 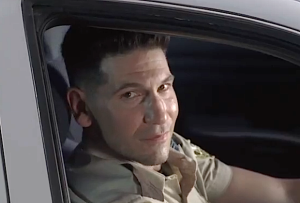 The near-death dream sequences were fab, particularly the one with Shane, which made me remember what a great actor Jon Bernthal is. Pity he couldn't have stayed in the show, becoming a Negan type... anyway, the dialogue was excellent, as he applauded Rick for finally understanding what the world has become, what has to be done, and reminded him of his 'finest' moments.  Also that Judith is very probably his daughter.  She has his eyes, after all...


And Shane saw it all

Here's Rick and Shane's first ever scene, if you want to see it again, complete with burgers :)


As Rick floats nearer death, Hershel appears in the 'no more kids' stuff' place in his barn, and shows him the beauty of the world before him, as he did back then, except that time it was real... 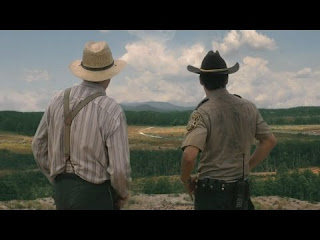 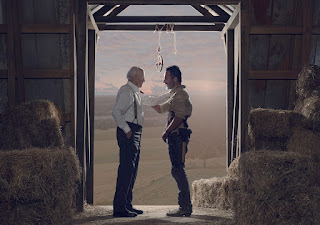 ...and Sasha shows him all his friends lying dead, but tells him lots of profound stuff about living to keep your people alive and passing on your strength, and making sacrifices, a bit like the stuff Abraham told her just before he went off to die by Lucille. 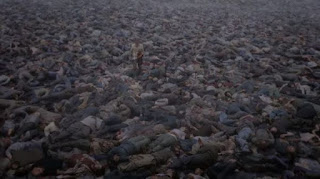 And so to the moment when all seemed lost, and the 'family' charged forth onto the metaphor bridge to save him.  Did you think it was real at first, too, or was that just me?  Lump in throat and tears in eyes time.  Then I thought....  hang on.  This is too perfect.  Too corny.  Too...predictable, much though I wanted it to be real, and, if Rick was going to die, for it to be at home, with Michonne... 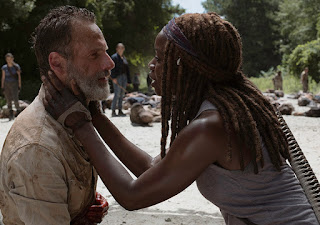 The whole 'does he destroy the bridge in order to stop the herd heading for Hilltop, or keep it standing as a monument to what he had hoped to build, for Carl' thing was corny too, but in the best possible way.  Sometimes, corny is just what you need, and TWD always gets it spot on. 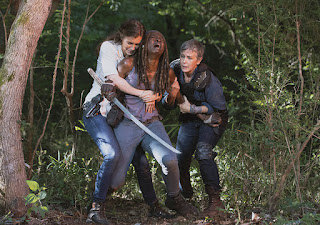 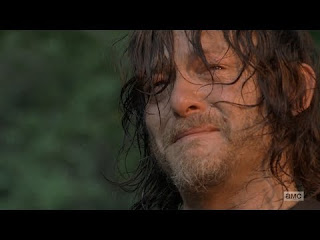 Saddest moments ever when when Daryl cried, when Michonne was being restrained by Maggie and Carol, but saddest of all was when Daryl walked away. 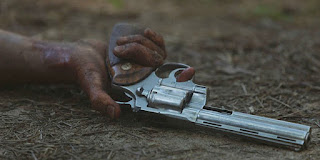 I assume that Jadis picking him up where she did means that the explosion flung him some way away, because I'm not buying that Michonne, etc, didn't go up to the bridge to see if he was still alive! 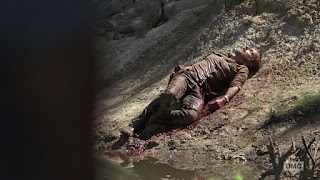 Meanwhile, back at Alexandria...  I felt that the Maggie-not-killing-Negan thing was wrapped up a bit too quickly, even though I'm kind of done with this storyline now, and of course he was totally manipulating her.  She's right, though - his imprisonment is a far greater punishment than death, but it just seemed a bit too 'okay, that's sorted, then'.  But given the time jump - which looks to be about 6 years - maybe she'll go off to live with Georgie The Key lady in the interim period now that she's sorted out the Negan-shaped monkey on her back ('cause, of course, you noticed that Michonne gave her 'the key' too, right?!). 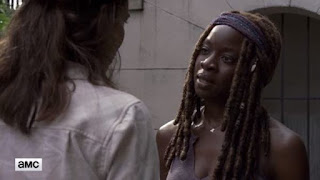 LOVED how the time jump was done - how, once the helicopter disappeared into the distance, the vegetation grew, the barn collapsed... and the years passed.  Cracking stuff!  Judith was about 3 or 4 and now she's 9.  Nice to see that THE HAT is actually looking less battered than when Carl had it.  Perhaps it is a magic hat. 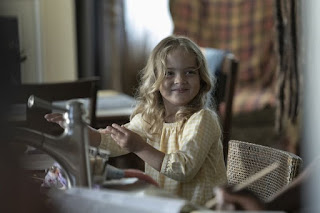 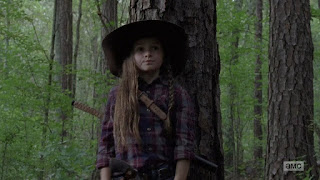 It's exactly the right time to do this jump - in any TV show (or book), when a major character leaves or dies, just picking up where things left off can get tedious, mostly because of the mourning period.  It has to happen, for realism, but it can't go on as long as it would in real life; endless grief doesn't make for good TV.  Much better just to skip along a bit further. 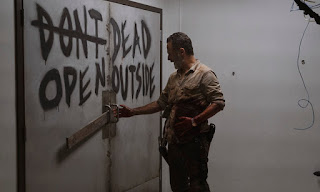 Anyway, this appears to be what the producers meant, when they said that Season 9 would be a different show ~ the episodes so far were just the remnants of what went before (as opposed to what comes after).  Michonne and Eugene both have a new 'do', and the Walkers are evolving....  I wonder if there is going to be a little Rick walking around, too ~ remember that scene in S9:3 Warning Signs when Richonne talked of such possibilities?  Seems sad, though, that all those we have known and loved will, by next week, be so long ago departed.... but Rick isn't dead.  Hurrah!

You can read more about Rick not being dead HERE; it's good news!

I've also read that Daryl goes off into the wilderness to live alone, distraught after the loss of Rick, to be found by Carol, and that Rosita and Eugene are the first to discover the Whisperers - presumably that bit in the trailer when they were covered in mud.

I will leave you with some reminders of times past, and the reason why Judith Grimes will kick ass... Daryl named her!