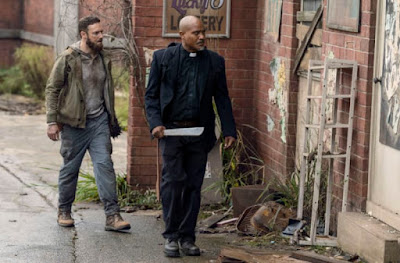 I love these side stories; as Gabriel and Aaron (two of my favourites) go out in search of food, we're seeing the immediate aftermath of a war, rather than six months or a year later when our gang is back on its feet.  One More was like a 45 minute snapshot of the changed world.  Some of the imagery, like the blood tarnishing the beauty of nature, the burned family with the flowers, the door flapping in the wind, was so emotive ... the cars nothing more than rusting, dusty, useless lumps of metal.

Then there was the delapidated shop with the lottery machine outside, and the scene on the rooftop; the couple lying on the mattress, the words 'Save Us', presumably for passing helicopters —must have been there since the early days.  Shame they didn't have Rick's GUTS plan to get them to safety. 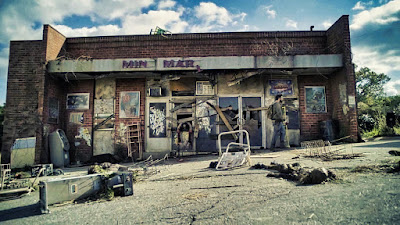 Few scenes epitomise eleven-years-on survival in a post apocalyptic world more than a priest and a man with a metal arm and a mace for a hand playing cards for bottle tops and drinking $2k whisky by firelight in a forgotten old warehouse, having just eaten wild boar.

Aaron: 'The fact that people would pay that much to get drunk is a huge part of what was wrong with the world.'  Loved it! 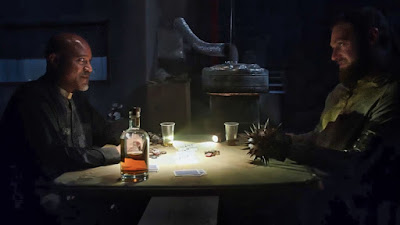 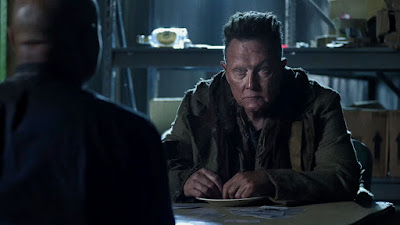 As for old warhorse Mays, the custodian of the warehouse—that whole scene had such a feeling of the Wild West about it, and enforced Russian roulette is one of those storylines that never gets old.

Earlier, when drunk, the idealistic Aaron insisted that the world could go back to how it was (presumably minus people playing $2K to get drunk), whereas the more pragmatic Gabriel insisted that it couldn't.  When Aaron said, 'You have to remember who you were', I could feel Glenn's echo across the years, saying 'it's still who we are' as he let the crazy man out of the box in No Sanctuary....

... who then tried to kill Rick.  Later Gabriel said that he'd only made the observation that 'evil people are not the exception to the rule, they are the rule' because he was drunk, but maybe the truth is somewhere in between their opposing outlooks.

After Aaron tried to resurrect the former role that he missed so much, that of helping people and bringing them back to the community, it was Gabriel's more realistic, jaded view that no doubt saved a lot more bloodshed.  'He killed his brother's family' .  I'm not sure that Aaron had quite cottoned onto the story in the words Mays didn't say about his brother stealing the last of his food, though they certainly found out the consequences of the brother's actions when they went upstairs.  Had Gabriel not smashed Mays over the head with Aaron's hand, it could have been Jocelyn or Dante all over again. 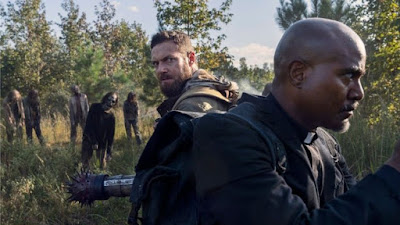 A quieter episode, but one with so much good stuff in it.  It could have stood up as a play on its own: two men with different outlooks, wandering the wilderness in a destroyed world.  I liked how it was the man with the killer hand who retained his faith in human nature, but the priest who, despite what he said to Mays about forgiveness, saw the world for what it is now.  Oh yeah, and the scene when Aaron laughed as he helped Gabriel out of the mud, then got covered in it himself... 😁😁 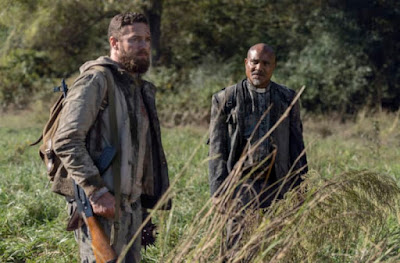 Next week... what happens to Ezekiel, Eugene, Princess and Yumiko?