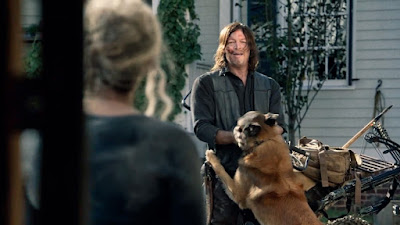 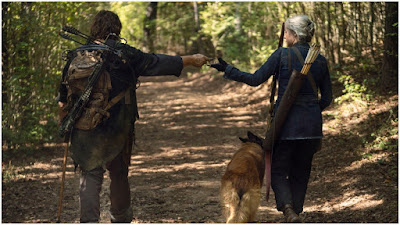 I loved this episode!  Centres around Daryl and Carol going in separate directions and struggling through bad days, starting with Carol's narration - I'm really liking these little 'where we're at now' speeches at the beginning of each of the bonus six.  The co-stars of this week's were, of course, Dog and Jerry, both of whom made Carol's bad day a lot better than it might have been. 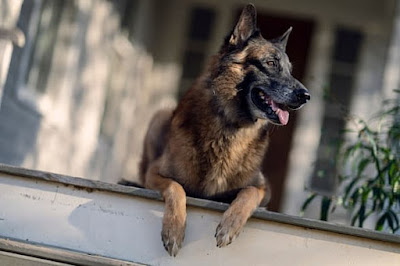 I'm guessing many cries of 'Think he's trying to tell you something, mate' went up, as Dog chose to follow Carol rather than his master in the clip above that we all saw before the episode aired.  Perhaps he knew Carol was the one who needed him more, on that day.

Some dialogue that stood out for me:

Carol: Every tough decision I've made was always to protect us

Daryl: You'll make it work.  You always do.

Jerry: You always do.

Carol is viewed like that by everyone, even when she is despairing and sees herself as weak, hopeless and disliked.  I wonder when she will really start to believe it?  Ed did such a number on her - much of the time she does believe in the post-apocalyptic Carol, the person who was inside her all the time, but now and again she forgets that she's the woman who looked up on the internet how to un-dislocate a shoulder, so she wouldn't have to keep going to ER.  And undislocated it herself.

Then there's the soup out of old potatoes, wrinkled mushrooms and dandelion root - don't forget, she's the lady who used to make miracles happen with water chestnuts, never mind the beet and acorn cookies. The stores are looking a bit different from how they did in JSS, though, aren't they... 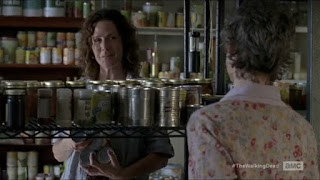 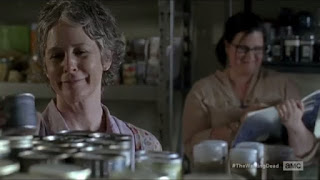 When she first got back to Alexandria and was talking to Jerry, I hated seeing her sounding so apologetic just for being there.  Wondering if she should 'get out of everyone's hair'.  Yes, the lady who saved everyone from incineration at the CDC, from becoming dinner at Terminus (including you, Daryl Dixon), and being slashed up by the Wolves shortly after the water chestnut and cola canned ham conversation.  Feels like Daryl's brutal treatment brings out the Wife of Ed Peletier in her, all over again.

'If someone I love beats me up, perhaps I really am worth nothing'.

But dear Jerry was with her for all those years when she was happy in the Kingdom.  He knows that Queen Carol is still part of her, too.  I loved him for checking up on her, realising that she was in much worse shape than she'd tried to make out, and showing his unconditional support.

'A friend is someone who thinks you're perfect

even if everyone else thinks you're broken' 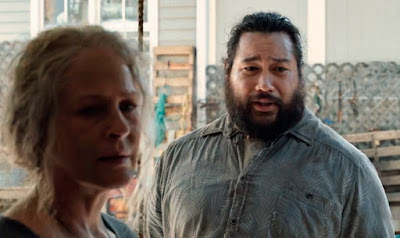 Her comment about not needing an apology because it didn't mean anything other than a truce said a lot; Daryl's actions speak, rather than his words.  When she told Dog that she missed Daryl, too, I felt she meant missed him as in the two of them being close, rather than his actual physical presence. 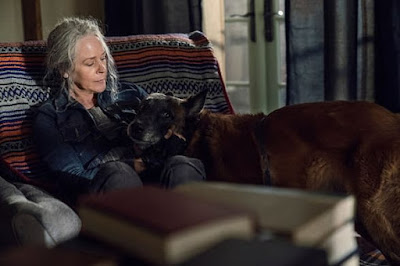 Other stuff that really appealed to me about this episode: how Caryl's killing of the Walkers when she went outside to find plants was almost casual - like they've got so used to them that they're just like pests they have to deal with.

...and the basic survival stuff - eleven years in, those who have made it so far and will continue to do so are endlessly and admirably resourceful.  Carol finding her ingredients for the metaphorical stone soup and mending the solar panel, Daryl fixing his bike with old wires out of age-old cars, not to mention finding some of those skeletal Walkers that have been around for a decade; ex-soldiers, still with MREs, Camels, clips and tools in their kitbags.  What a find! 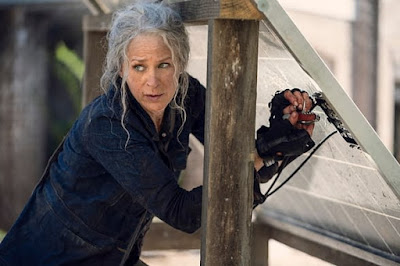 And then there's the rat... like the tomato metaphor of Warning Signs, it stood for so much.  The vermin that destroys all they have, Carol's frustration (just when everything is really, really bad, it can actually get a bit more difficult), her determination to fix a problem even if it means busting up a bunch of other stuff, and probably a few others I'll catch next time I watch it (and I liked how Dog came to find his human when he thought he'd detected the rat during the night). 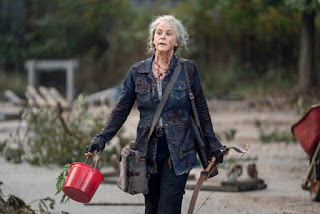 It was just good to spend so much time with Carol in this one - and let's hear it for women in their fifties who look great with long grey hair!  Sometimes, with those wispy tendrils hanging down over her face, I think Melissa looks really beautiful in an ethereal sort of way, much more so then when she was younger.  Talking of post-apocalyptic sex appeal, any man watching this (with the knowledge that 50% of the known female world adores Daryl Dixon, however dirty he gets) should realise that metrosexual is not the way forward. 😉🤣 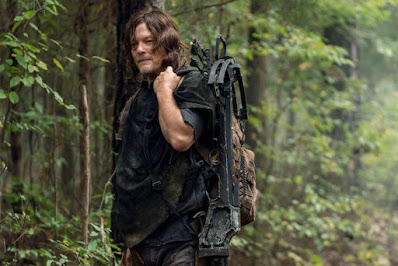 Yes, he always comes back. This current spat is only a blip; they'll find their way back to each other again.  Fear not.

...and here's a little reminder of some of those things Carol does to protect people.... 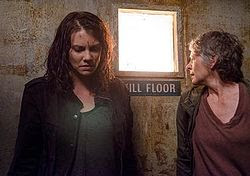