Review: The King, The Widow and Rick #TWD S8:6 #TheWalkingDead 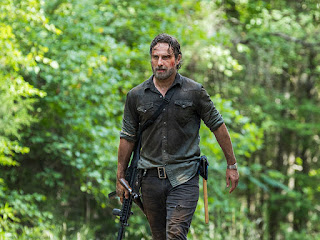 And so they return... Rick marches/limps along the road like a wounded, worn out soldier, Daryl takes his hissy fit back to Alexandria, Aaron takes baby Gracie back to Hilltop, and the Kingdom mourn their dead.  Rick's not-quite-instant-messaging system lets them all know what's going on, and reminds them that 'our path has led us to who we are'.   If I was him I'd have been pretty pissed at being left out there all alone in Walker/Saviour/Scavenger-strewn Virginia.  Come on, Daryl, this isn't who you are.  We love you best, but we love Rick too.


At the Hilltop, Jesus distributes loaves and fishes (and the odd turnip) to the Saviours, while Gregory suggests the gallows might be a better solution for them.  Given that I accidentally saw a picture from the comics of Gregory hanging from one of these contraptions, I cannot help but think his words might come back to haunt him, especially when he gets shoved in with them.  Maggie's a farm girl, remember, and knows all about sheep and wolves and stuff, unlike their 'hippy-dippy, kung-fu fighting friend'.  Which is why she, especially, should be questioning how come she still has a completely flat stomach, four months into her pregnancy. 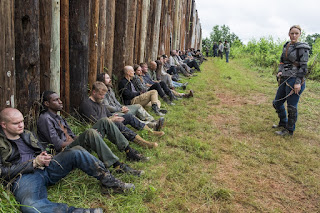 'If you fight for us, we'll teach you how to speak in complete sentences.  Deal?' 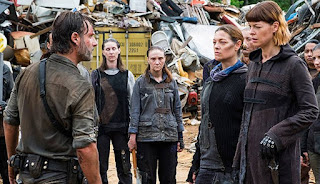 Meanwhile, back at the junkyard, Jadis is doing a spot of naked sculpture when some of her Scavengers turn up with Rick, who tells them of the Saviours' misfortune, and wants to strike a deal with them.  But he talks too much.... incidentally, has anyone else noticed that Kingdom Diane and Junkyard Tamiel are the same person?


It's great to see Michonne and Rosita back in action, albeit not at their best, as they discover yet another Saviours' hideaway, but the baddies' plans are foiled by a head on collision with Daryl and Tara in a truck, on their way to the Sanctuary to 'finish it'.  One cannot help but suspect this might not all go as smoothly as planned.  We may have seen the more human side of Negan last week, but let us not forget he is the man who beat Abraham and Glenn's heads in with a baseball bat, and laughed while he did it.  He's still a psychopath.  It's my prediction that Daryl and Tara, who have vowed to kill Dwighty-Boy between them, may themselves be saved by that very victim of Negan's iron. 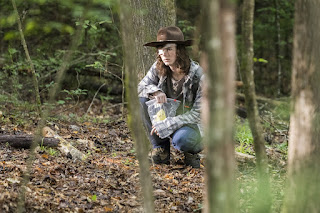 Back in the woods outside Alexandria, Carl is bored and goes off looking for Walkers to bait.  Just like old times, really, and good to see a bit of casual zombie despatching back in the series, especially for those who don't like the gun fights.  Here he comes across Siddiq, who he met in Episode 1; Carl introduces himself as 'Coral' and they say a load of profound stuff to each other, including Carl saying that his mum told him to always do what was right, even if it was the hardest thing to do.  Lori was nobody's favourite character, least of all mine, but I have to say I found her death scene from Season 3 pretty damn heartbreaking, and I cry real tears every time I see it.

Carl and his new buddy work on honouring Siddiq's mom by killing some Walkers and thus freeing their trapped souls, until it gets out of hand, but at least Carl's indestructable hat remains in place.

More echoes from the past as Carol tells Benjamin's little brother, Henry, what happens when kids play in the woods (they end up in Hershel's barn, fully Walker-fied), but Henry needs to avenge his brother's death.  Hope we get to see him kill the revolting Jared Saviour ~ it's got to be either him or Morgan, hasn't it? (btw, where IS Morgan?)  And I'm not too convinced by the Friendly Saviour, who tells Jesus he was just mindin' his own business, puttin' up a fence, when he got caught up in it all...

Later, there's a stepping up of the chemistry between Carol and Ezekiel, as he tells her that she is the only person who makes him feel real.  But what will we call them?  Cazekiel? Carekiel?  Ezekierol?  I was thinking that Carol would end up leading the Kingdom, because she does, after all, totally rock, but maybe they could be King and Queen?  Except Carol should be the King.  Ezekiel can be the drama queen.....


And so Aaron and Enid go back to Alexandria to fight, and Rick sits naked in a big container thing in the Junkyard.  As soon as I saw her feet, I thought, hang on a minute, Jadis is wearing Rick's boots ~ this does not bode well.

Two more to go ~ I have no more predictions but would love to hear anyone else's!