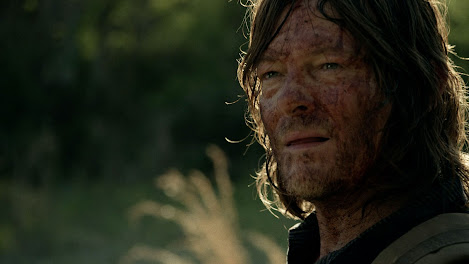 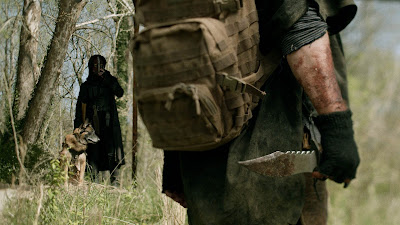 So I was wrong last week about Pope being a former fundamentalist preacher ... but on the right track.  I've seen a few tweets saying negative stuff about this episode, chiefly because it featured no Carol and lots of Leah, the Woman We All Loathe, but I think it was absolutely up to the standard of the rest of the season so far.  And come on - it would be much worse if Daryl had had a relationship with someone nice! 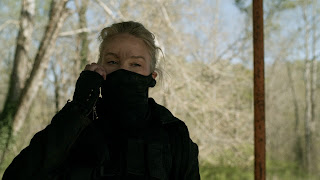 It's always fascinating to see inside the enemy's lair and find out what they're all about, and this time it's Meridian, discovered by Daryl as he and Dog followed a Reaper back there.  Daryl being Daryl, when he was outside looking for Dog in the daylight he was constantly looking around, assessing his surroundings... 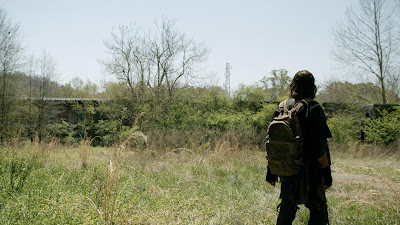 ..and even when he was captured he never took his mind off the ball, counting on his fingers how many Reapers they would have to contend with.  As he was flung into the cage I bet he thought, 'not this crap again ... I hope the menu's an improvement on dog food sandwiches...' 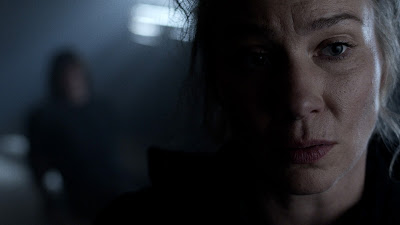 The conversations between Daryl and Leah were a maze of half-truths, lies, hidden agendas, etc.  Seemed like she still hankers after him, whereas with Daryl it's more like she's someone he cared for but is now part of his past - especially now he's realised he never really knew her anyway.
'I'm sorry you ended up with these people.'

'These people are my family.  They never stopped looking for me.'

So she was a mercenary right from the start - while Daryl was running around looking for Sophia and finding formula for Judith, Leah belonged to a group that brutally attacks others and strings them up for no reason other than wanting what they have - and all because their leader believes they are the Chosen Ones. 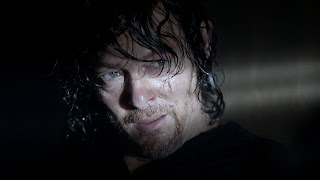 It was clear that he was thinking 'this woman is dangerous and I need to tread real careful here' - he told her he'd never lied to her and wasn't going to start now, then went ahead and did just that, to protect his own family from her band of psychos.  Yes, even the tall skinny guy who never shuts up.

Maybe Leah has begun to believe the lie she told Pope, i.e. that she chose them over Daryl.  We know from 10x18 Find Me, though, that she only went back with her Reaper family because Daryl had left.

In contrast, he did not go back for her until Carol told him that her first priority had to be Ezekiel, Henry and the Kingdom.  He's never been one to stay in one place for too long or have his movements restricted, as Leah tried to do, but I believe he saw his life with her as something that he knew wasn't quite right. 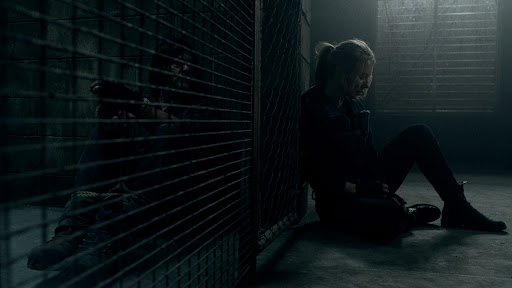 He said that he was 'scared of letting go' - of looking for Rick, of his intense relationship with a woman who'd committed to someone else ... of the past, and all those people with whom he'd been through so much, who respected and cared for him.  Whereas there was no doubt some truth in that, he made his choice.  At the time, he didn't want to let go. 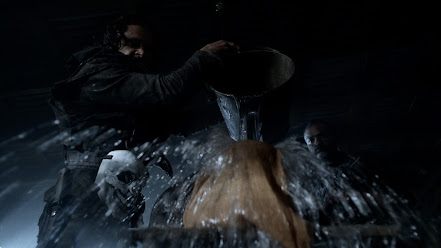 Leah said they would never have worked anyway, because it's impossible to be happy in this new world, but Daryl knows otherwise.  He's seen Glenn and Maggie together.  Rick and Michonne.  Aaron and Eric.  Rosita and Gabriel - the list goes on.  Impossible if you're with a group like the Reapers, yes.  Being with deranged sadists can turn you into the sort of person who thinks waterboarding a man you love(d) is an okay thing to do, even if you weren't already inclined that way.
🏹🏹🏹 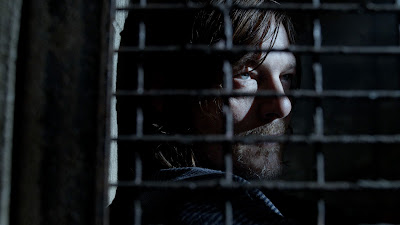 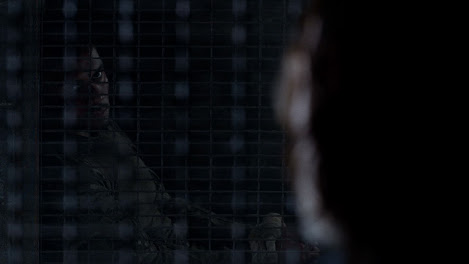 Seemed like Daryl managed to convey to Frost, in the cell opposite, what his story was, and Frost went along with it.  I wonder where Elijah is, after we saw him being dragged off last week?  I don't imagine they're all going to escape just yet.  After passing Pope's trial by fire, Daryl will probably have to stay 'undercover' for a while, for his own safety but mostly so that he can avert Reaper eyes from Alexandria. 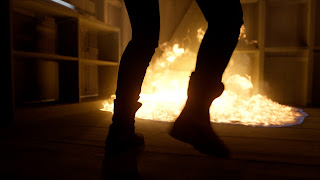 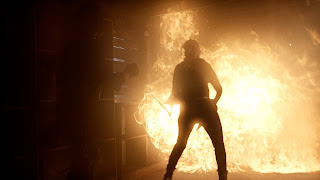 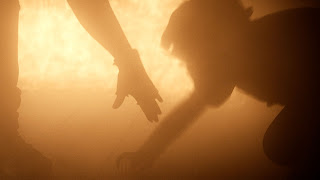 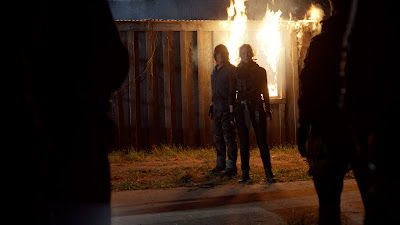 My bet is that Daryl will have to bullshit Leah that he is on board with this 'chosen one' thing; her conversation with Pope showed that she was keen to still have him around. 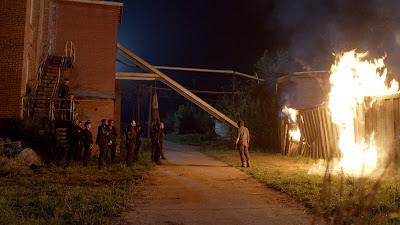 But how far will he have to go, in order not to get thrown back into the flames?  Having witnessed the brutal murder of Bossie, simply for running from the enemy to save himself, Daryl must know he's got to tread more carefully than he ever has before.  He's wise enough to know that Pope is not going to trust him for a while, yet, and will be watching him like a hawk. 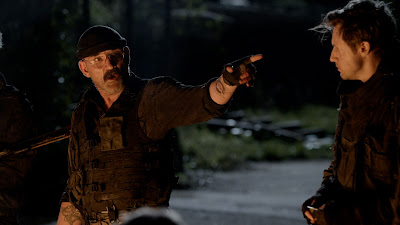 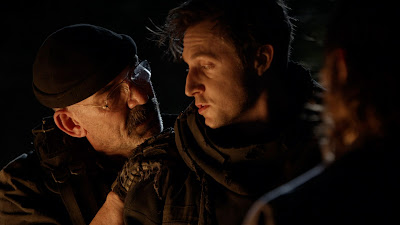 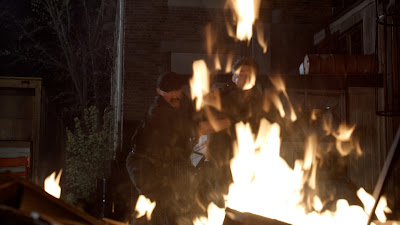 After the burning incident, the knowledge of what he is up against was written all over his face. Sort of 'holy shit, am I in trouble here'. 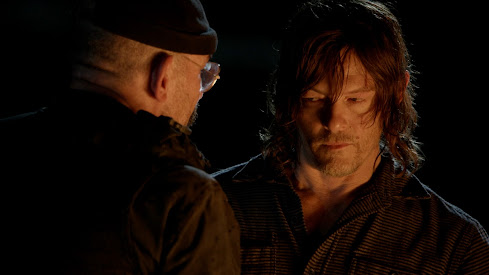 Did you hear the echo from 7x11 Hostiles and Calamities, when Negan threw Dr Emmet Carlson into the furnace...?

As for Pope, a friend said, 'It's going to take the real Negan to get rid of the wannabe Negan.'  Well, he's on his way... and Maggie's not going to hold back on the vengeance after what they've done to her people.

Won't be next week, though... here's what's coming:

And look at the trailer for World Beyond Season 2!!
(I think we're supposed to think the white faced person/walker with the beard might be Rick... nah!)

The Story of Daryl and Carol
Dinner Time
A Thank You Letter From Judith Grimes
Girl Power
Days Gone Bye: A Tribute to Rick Grimes
They Turned....
Posted by Terry Tyler at 03:47